I flew to Tampa this spring, my first business trip of the year. Felt weird to be on a plane in a pandemic, even if we are at the tail end. Last thing I packed, as usual, was something to read.

My reading calendar for the month is always jammed up with books I’m covering for the blog, so I usually indulge myself in reading material on flights. I could have selected anything — the latest space opera, a magazine, some graphic novels, a Best of the Year collection. But what I brough instead was Sanction & Sin, a Warhammer Crime anthology, and it was a terrific choice.

I’ve been a fan of the Warhammer 40K fiction line for years, especially the Horus Heresy and the novels of Dan Abnett and Ben Counter. The audio versions of those books got me through long years of commuting through Chicago traffic.

The Warhammer Crime sub-imprint is new series of books with a fresh take on the grim Warhammer 40K universe, mixing far-future adventure with gritty urban crime stories. There are currently three novels and three anthologies in the series, with two more slated for this year. There’s a fine overview on the Black Library website; here’s an extract.

Warhammer Crime is back in 2022 with gripping slate of new tales.

In 2020, Black Library released something completely different – a new imprint of novels exploring the even darker underbelly of the 41st Millennium. Set on Varangantua, a decaying hellscape where only the ruthless prosper, the first Warhammer Crime releases were Bloodlines and Dredge Runners. These books gave us a street-level view of a vast and decaying futuristic city – and also introduced Baggit and Clodde, a fast-talking ratling and his ogryn pal.

They were soon followed by Flesh and Steel, which saw a crusading Probator investigate a brutal murder that took place in a neutral zone between Adeptus Mechanicus and Imperial territory.** Then, last year saw the release of Grim Repast, which followed the tortured Quillon Drask as he fought to overcome personal demons and escape a deadly game of corruption and conspiracy.

Crime connoisseurs and mystery maniacs rejoice – we’ll soon be ready to return to Varangantua with a new season of Warhammer Crime novels. Baggit and Clodde are back in The Wraithbone Phoenix, and the smart-mouthed ratling has caught wind of a score so big it could pay off his debts and save both of their skins. The only problem? Everyone else in the Dredge is after the same prize! Will the abhuman deserters win big before someone claims the bounty on their heads?

That escapade will be quickly followed by The Vorbis Conspiracy. This anthology sees the city’s Enforcers trying to deal with the aftermath of the fiery destruction that has consumed the district of Korsk. While this disaster means death and devastation for many, it also provides countless opportunities for the criminals of Varangantua – and perhaps bodies won’t be the only things found buried in the rubble…

Warhammer Crime will return later this year – sign up for the Black Library newsletter to keep up to date with the latest from the grim dark streets of Varangantua. In the meantime, head into the places good citizens fear to tread with the Warhammer Crime anthologies Broken City, No Good Men, and Sanction & Sin.

** You could call it a buddy cop story… but we don’t think tech-priests really have “buddies.”

Here’s a sneak peek at the cover of The Wraithbone Phoenix, coming in August. 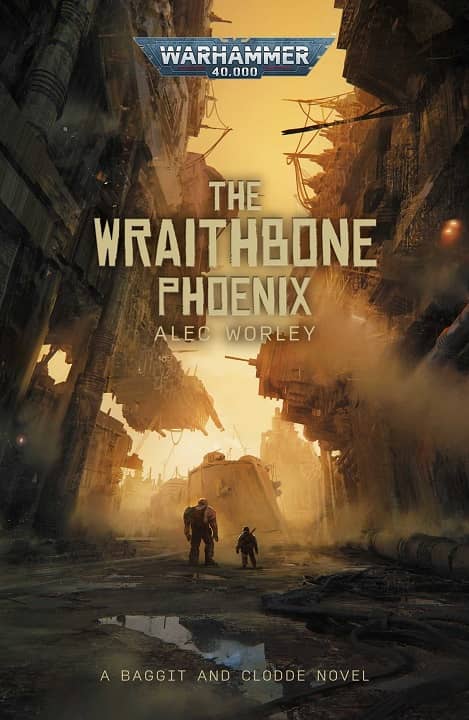 Warhammer Crime kicked off with Chris Wraight’s Bloodlines in 2020, which grabbed me right out of the gate with this book description:

The first title in the new “Warhammer Crime” imprint. Try to unravel the secrets lurking in the sprawling city of Varangantua.

In the immense city of Varangantua, life is cheap but mistakes are expensive. When Probator Agusto Zidarov of the city’s enforcers is charged with locating the missing scion of a wealthy family, he knows full well that the chances of finding him alive are slight. The people demanding answers, though, are powerful and ruthless, and he is soon immersed in a world of criminal cartels and corporate warfare where even an enforcer’s survival is far from guaranteed. As he follows the evidence deeper into the city’s dark underbelly, he discovers secrets that have been kept hidden by powerful hands. As the net closes in on both him and his quarry, he is forced to confront just what measures some people are willing to take in order to stay alive…

Here’s the details on all seven books so far.

Check out all our recent Warhammer coverage.

i love these, i dont read much warhammer stuff anymore, havent played the game in like 10-15 years, but when they announced the crime series i was all in. hasnt made me want to go back and play either tabletop game, but i have dabbled in the plethora of video games in either the 49k or old world side. the best one imho is the newest, chaos gate – deamonhunters, it’s like a 40k x-com and it’s great.

i have heard i might like the Eisenhorn novels but i havent tried yet. i also think dan abbnett is an amazing writer in comics for cosmic stuff, but havent checked out his 40k books either. so much stuff out there to read.

I’m totally hooked on WARHAMMER DAWN OF WAR, which I’ve put about 400 hours into so far. It’s the game that got me interested in Warhammer 40K

I have seen Chaos Gate — I will check it out!