I admire Frederik Pohl. He had a nearly 75-year career in science fiction, from the early stories he published as a young teen in the 1930s all the way to the Hugo Award he won in 2010 for his superb early blog, The Way the Future Blogs, at the age of 90. He was an astute and prolific fan writer, an agent, and a legendary editor, winning three successive Hugos for Best Editor for his work at IF magazine in the 60s.

His first love was writing, of course, and it’s not hard to sense some frustration at his mid-career lack of success, especially as he watched his fellow Futurians and friends enjoy stellar careers, including Isaac Asimov, Donald Wollheim, Damon Knight, Cyril Kornbluth, and many others. Asimov, whom Pohl had known since they were both teenage fans in Brooklyn, had such name-brand recognition that virtually everything he’d written was still in print in the 70s and 80s — certainly not the case for Pohl, whose early output languished in obscurity in moldering pulp magazines.

Pohl’s groundbreaking 1977 novel Gateway, the story of amateur explorers who discover the secrets of the hollow Gateway asteroid left behind by the long-vanished alien Heechee, both won the Hugo and Nebula Awards for Best Novel. The sequel, Beyond the Blue Event Horizon, was nominated for both awards two years later, and in 1979 Pohl won a U.S. National Book Award for Jem — an almost singular achievement for a science fiction writer, since the Science Fiction category was eliminated the following year.

By the early 80s his stature as a top rank writer in the field was unquestioned, an honor long overdue.

What did he do with all this new-found literary fame? Keep writing, of course. And he followed in the footsteps of Asimov, Heinlein, and other bestselling SF writers, bringing much of his back catalog back into print — including the 1982 volume Planets Three, which collected three long-forgotten space opera short novels published under the pseudonym James MacCreigh in the late 40s and early 50s.

None of these long stories had ever been reprinted in the US when Planets Three appeared. They were the wrong length to be included in American anthologies (although Malian Press did reprint “Danger Moon” in the UK in 1953, as part of their American Science Fiction digest series), and by the time Fred Pohl had made a name for himself, space opera was out of fashion.

Since Pohl’s audience knew him chiefly as the author of The Space Merchants (written with Cyril Kornbluth), Gateway, and similar work, he felt the need to apologize to modern readers for these tales in his introduction, saying:

All three of these novellas were published in the years just after World War II. For most of that time I had a full-time job… I don’t think they are very much like The Space Merchants — or like Gateway, or The Gold at Starbow’s End or, indeed, like almost anything else I have written since. They are space opera. They are action science fiction, meant for an action-oriented audience in the pulp magazines.

That statement is not meant to excuse them. For what they are, they are the best I was able to do.

Do these stories need excusing? That’s for you to decide — although modern readers may definitely look askance at the story descriptions, penned by pulp editors.

For example, here’s the editor’s teaser for “Donovan Had a Dream,” from the October 1947 issue of Thrilling Wonder Stories.

When Venus is ruled by a matriarchy of Hags, a quartet of gallant rebels seizes the weapons that can topple tyranny from its throne and establish a new reign of freedom!

I dunno. A matriarchy of Hags sounds like better government than what a lot of the world is saddled with today, you ask me.

Industrial sabotage is trouble enough, but sometimes what the sabotage conceals is far worse!

Say what you want about the editorial descriptions, but pulp magazines didn’t go cheap on interior art. Check out the gorgeous Virgil Finlay art for “Donovan Had a Dream” and “The Genius Beasts” above, and the classic Peter Poulton illo below.

I miss interior art in modern SF magazines — and especially line work that looked like that.

Here’s the complete Table of Contents for Planets Three.

Planets Three was published by Berkley Books in January 1982. It is 237 pages, priced at $2.50. The cover is by Gregg Hinlicky. It has never been reprinted, and there is no digital edition.

Action-oriented pulp needs no apology as far as I’m concerned, and on a more serious level, Man Plus is one of the best, most genuinely bind-blowing science fiction novels I’ve ever read.

Man Plus was the first Fred Pohl book I ever read!

After all these years what sticks with me is the fate of the main character, Roger Torraway, in the very first chapter. He is third or fourth in line for selection for the Mars Program… until the sudden death of the first candidate, and abrupt reversals for the others, catapults him into first place, and he finds himself undergoing strange surgeries to transform him into a cyborg suited for the surface of Mars. 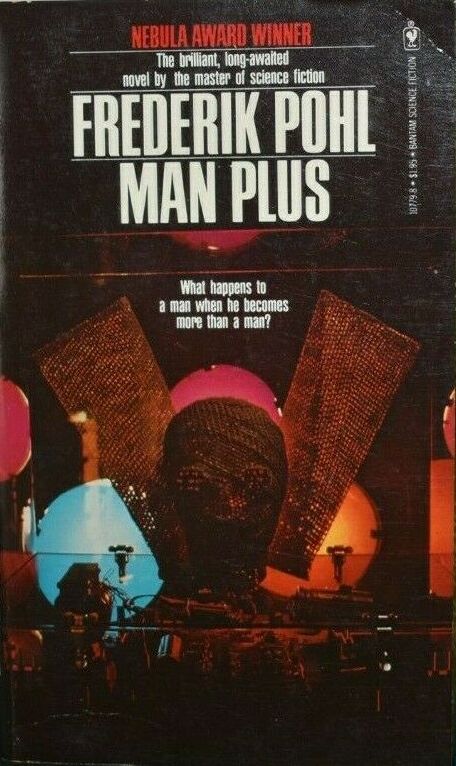 What struck me most in Man Plus was Pohl doing what SF does better than any other genre – suddenly pulling the camera back so as to give you a completely different, dizzying perspective that makes you rethink everything that’s gone before – and he does it TWICE on the book’s LAST PAGE! It literally left me reeling.

I cannot remember reading science fiction without knowing Frederik Pohl, save maybe for my earliest, dimmest memories. And he was ubiquitous, from his social/satiric sf with Cyril Kornbluth (possibly my favorite being Search the Sky), to his New Wave works in the 1960s and 1970s (“Day Million” is the first sf work I recall with a transgender character, long before John Varley and Robert Heinlein muscled in; “The Gold at the Starbow’s End” may be the work that taught me to love the New Wave), and then his “classic” sf books that signaled the “Hard sf Renaissance”, like Man Plus and Gateway.

But the “James MacCreigh” pieces are all new to me. (Yay, pulp fiction pen-names!) Seems like I have more book hunting to do.

I’ve never read SEARCH THE SKY — but you’ve just piqued my curiosity! Like a lot of his work with Cyril Kornbluth , it stayed in print for decades, and saw numerous reprints from multiple publishers. Sometimes we forget just how rare that is. 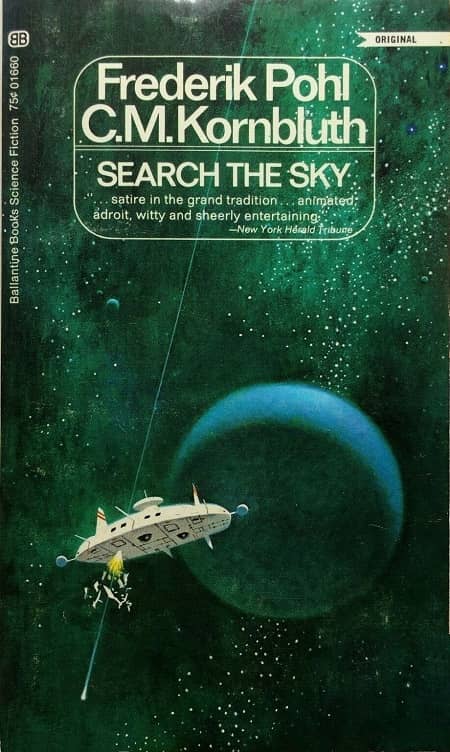