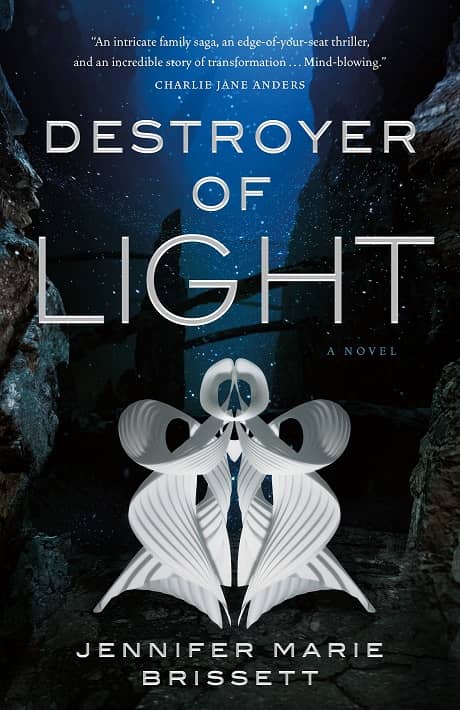 Looking for a good standalone science fiction novel? (I know I am. Everything is part of a series these days.) Jennifer Marie Brissett — whose first novel Elysium was nominated for the Tiptree and Locus Awards, and won a special citation from the Philip K. Dick Award jury — has a new novel out, and it looks like something that could kill a weekend for me nicely.

Destroyer of Light was published in hardcover in October of last year, and it made several Year’s Best lists, including the Kirkus Reviews 2021 Best of the Year, Bookriot‘s 20 Must Read Space Fantasy Books for 2021, and BiblioLifestyle‘s Most Anticipated Fall 2021 Sci-fi, Fantasy & Horror list (which summed it up as “The Matrix meets an Afro-futuristic retelling of Persephone set in a science fiction underworld of aliens, refugees, and genetic engineering.” That ain’t like nothing else in my TBR pile, I can promise you that.)

Book Riot called Destroyer of Light “[A] really hard-hitting sci-fi story.” But I think my favorite review comes from Eric Smith at The San Francisco Book Review, who wrote:

Invading aliens destroy the earth forcing the remaining humans to resettle on Eleusis. Even with peace talks, the alien threat is ever-present. A warlord is abducting children from the villages building an army to stand against these aliens, leaving one mother to desperately search for her daughter. Genetically modified twins search for an abducted boy of a human/alien couple. And a girl with special abilities must face abuse and hardship but could be the key to the human’s future on Eleusis. Her gift is also her curse…

Brissett retells the myth of Persephone in this dystopian Afro-futuristic thriller. It is a wonderful story of transformation, survival, and what it means to be human. As effortlessly as she weaves between the past, present, and future, Brissett also blends sci-fi fantasy with a little whodunit. If you enjoy Afrocentric stories and characters this is a book for you.

Destroyer of Light: Hades and Persephone, is book 2 of 3. I don’t think book 3 has been published yet. So this does look like a series, but I hope it’s a trilogy. I do prefer stand-alones, too.

The book in this post IS a stand alone, but there is another book with the SAME NAME that is written by Rachel Alexander that is part 2 of the Hades & Persephone series. It’s a small world?

Jesse — you are absolutely correct. Thanks for straightening that out!