Hall of Smoke and Temple of No God (Titan Books, January 2021 and February 2022). Cover designs by Julia Lloyd

I first took notice of H.M. Long’s debut fantasy Hall of Smoke when The Guardian included it in their roundup of The best recent science fiction and fantasy last January, calling it “a compelling debut.” Closer to home, Paul Weimer at Tor.com celebrated it as that rarity of rarities — an entertaining fantasy focused on the most-neglected of the D&D archetypes, the cleric. (He also name-checked Greg Stafford’s Glorantha in his review, which warmed my heart.)

I saw a copy for the first time in Barnes & Noble on Saturday — alongside the newly-released sequel Temple of No God. The combination proved too much for someone with notoriously poor impulse control, and both volumes ended up coming home with me.

The best summary of Hall of Smoke I’ve seen is from that Guardian review:

Canadian HM Long’s Hall of Smoke, the first book of a duology, blends epic fantasy and a Viking-inspired culture in an assured, fast-paced first-person narrative. Hessa, a priestess of the goddess of war, has the ability to turn her enemies’ bones to dust with a single scream. When tasked by her goddess to slay a traveler, Hessa disobeys and is banished to the mountains. She returns to her village only to find it pillaged and her loved ones slaughtered. In a bid to atone for her disobedience, she sets out to track down and slay the traveler, thus ensuring herself a place in the afterlife realm of the High Halls where she will be reunited with the souls of her family. Set against a backdrop of nations at war, Hessa’s labyrinthine quest of redemption and self-discovery pitches her against not only blood-thirsty soldiers sacking her homeland, but a pantheon of vengeful gods and demons. By turns gripping and poignant, Hall of Smoke is a compelling debut.

But by far the most interesting commentary is Paul’s at Tor.com, who places the book squarely in the sights of anyone looking for an action-oriented tale featuring a compelling D&D-style warrior-priest, and one that makes them more interesting in the process. Here’s Paul:

The basic four archetypes for a D&D-like party are the Fighter, the Rogue, the Wizard and the Cleric. In secondary world fantasy novels, the first three are very well represented, to the point of many variations and subclasses and versions of same. But the Cleric is far rarer. It’s not that there are none, mind you, but they are far, far less common as protagonists. Why is that?…

Evil priests of dread Gods as antagonists and cannon fodder to kill? That’s common. But a pious holy woman dedicated to her Goddess as a protagonist? Much fewer in number, especially when you are looking at female protagonists. And that is why H.M. Long’s Hall of Smoke is welcome, as we get front and center Hessa, a priestess of a Goddess of War…

The touchstone as I was reading the novel was the late Greg Stafford’s roleplaying game world of Glorantha. That is a world of manifest Gods in a cubical world, where everyone is devoted to some divinity or another. All Gods are real although not necessarily equal, and there is conflict on plans both mythic and mortal…

For all of the theological and spiritual conflicts in Hessa’s adventures, making Hessa a cleric of a Goddess of War means that she is very much an action protagonist and there are some excellent action sequences throughout the book, leavening the sometimes somber and reflective and even melancholic aspects of the book (a priestess concerned if not doubting about the state of affairs with her Goddess and the world is not very cheerful) with well written action sequences…

There is a throughline of a secondary character’s story that Hessa’s intersects that really ties the book together. The character’s God has been killed (Gods can be undone, an abiding concern throughout the book). Hessa’s worry about the characters’ state and safety, and to avoid being subsumed by the spiritual threat, is that the character find another God to pledge himself to… her concern is that the character find *some* other Northern deity to believe in, for their own protection and well being. That is what a priestess or cleric is for. Not just to smite foes almost as well as true fighters, or to call on divine power (Hessa does both of these) but also to explore and provide a spiritual anchor, guide, signpost… Long understands what priestesses and clerics in fantasy stories could be doing besides smiting foes natural or unnatural alike. 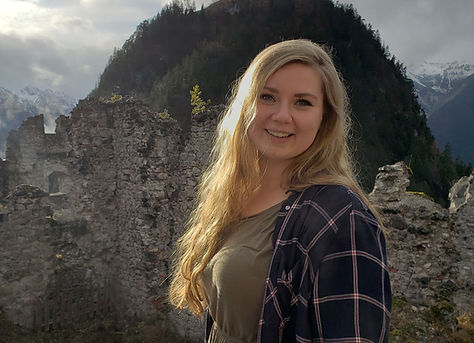 At her website, Long helpfully explains the relationship between Hall of Smoke and its not-quite sequel Temple of No God.

She also teases a third book, Barrow of Winter, due next year. Here’s the complete publishing deets.

Both Hall of Smoke and Temple of No God were published by Titan Books, with cover designs by the always-dependable Julia Lloyd.