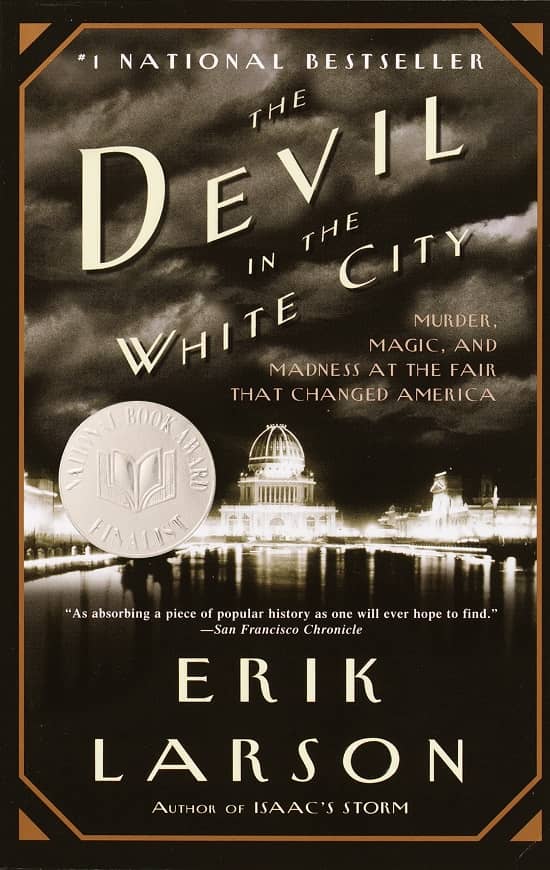 As a lifelong Chicagoan I have always enjoyed stories of my city’s colorful history. From its Blues connection to New Orleans, to the Gilded Age of Marshall Field and Parker Palmer, to the seedier stories like that of the Everleigh Sisters, the building of Chicago reads like a naughty version of Downton Abbey. Of course, as entertaining as its early history can be, Chicago was a tough, crime-ridden place. It was dirty, both literally and figuratively, and violent in every sense of the word. The city was and still is, associated with a lot of unsavory activity that we unsuccessfully try to distance ourselves from. For instance, we’d love for the world to stop thinking of Al Capone every time someone brings up Chicago. Ironically, the one name most people don’t associate with our city is H. H. Holmes, at least up to now. 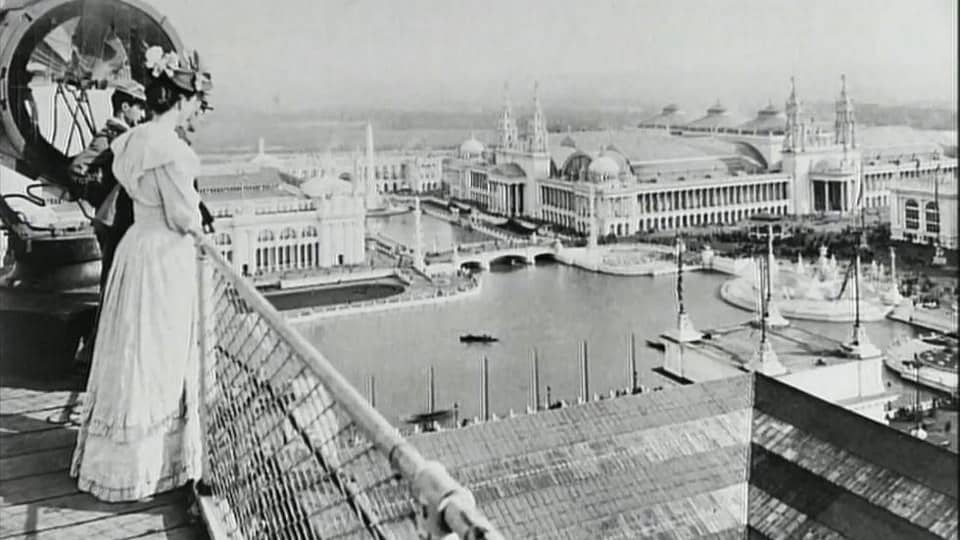 In 2003 Erik Larson penned a true story about the incredible events surrounding the 1893 World’s Fair which was held in Chicago. Beating out more popular locations such as St. Louis, New York and Washington, D.C., the Chicago elite put all their money and influence behind capturing the World’s Fair. They were determined to show the world that Chicago had come back from the Great Fire of 1871, bigger and better. Larson’s book, The Devil in the White City, references the literal White City of Greek-revival buildings which sprang up along Chicago’s lakefront in record time, creating a magical setting for the World’s Fair. Along with this amazing architectural fete came a myriad of other “firsts” such as the first Ferris Wheel courtesy of George Washington Gale Ferris, the first building lit entirely by electricity, and the introduction of Wrigley’s Spearmint Gum. One of the darker firsts that came out of the fair was the first serial killer in the United States; thus “the devil” in the White City.

Jack the Ripper was still fresh in the minds of the Western world, having dispatched his last victim in London in 1891, around the same time ground was being broken on the White City. But as violent as American could be, there had never been a similar documented case of multiple murders this side of the pond. Enter H. H. Holmes, real name Herman Webster Mudgett, a con man with a proclivity for Arthur Conan Doyle novels. He commissioned the building of a hotel near the grounds of The White City and marketed it as a safe place for unaccompanied women to stay while visiting the fair. Ladies traveling on their own was still a novel concept at the time, and even more novel was accommodations targeted at this demographic. What Holmes had actually built was what would later be called the “Murder Castle” by the press, where he dispatched a confirmed 10 victims, but potentially dozens more. 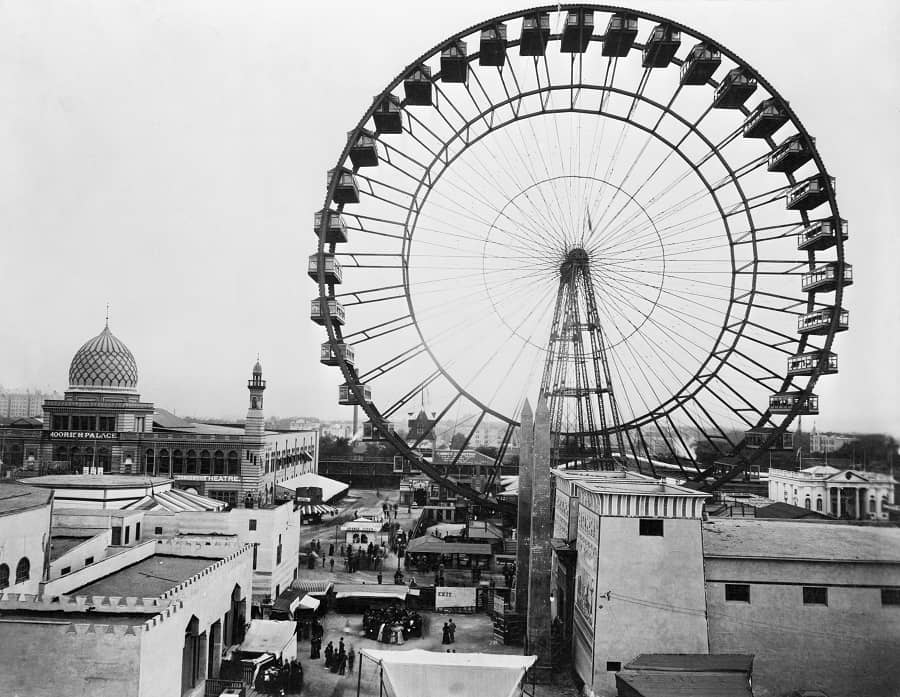 In 2010, Leonardo DiCaprio purchased the film rights to The Devil in the White City, at least in part because he longed to play a really bad guy. Now, nearly 12 years later, Keanu Reeves has signed on to the long-gestured project, which will be produced as a big budget Hulu series. It is yet unclear if Reeves is taking over the part of Holmes, which DiCaprio originally wanted to play, or if Reeves will instead take the opposite part of Daniel H. Burnham, the architect of the White City.

Deadline, which broke the news, states the Hulu series will, “follow Daniel H. Burnham, a brilliant and fastidious architect racing to make his mark on the world and Henry H. Holmes, a handsome and cunning doctor who fashioned his own pharmaceutical ‘Murder Castle’ on fair grounds – a palace built to seduce, torture and mutilate young women. The story takes the viewer on a tour of murder, romance and mystery in the gilded age.” 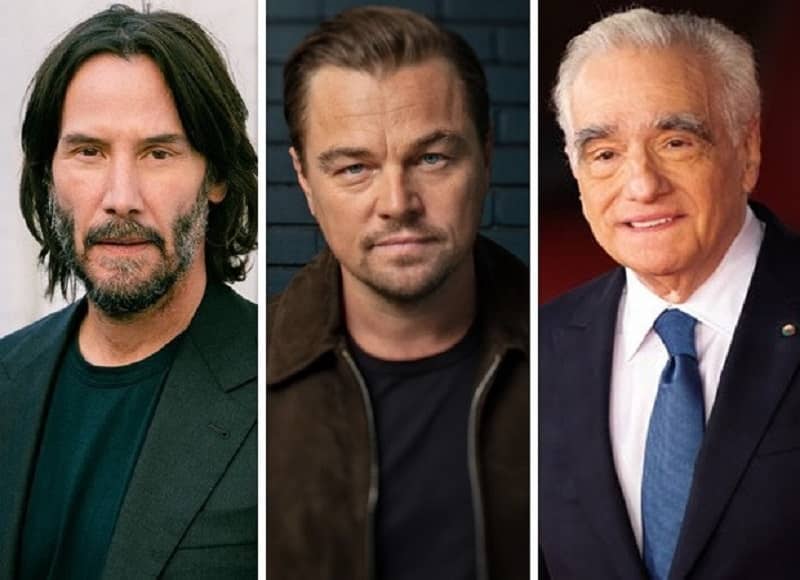 Martin Scorsese is executive producing alongside Rick Yorn, Sam Shaw, Jennifer Davisson and Stacey Sher. Todd Field is set to direct the first two episodes of the limited series. A release date has not yet been communicated, but I’ve been waiting for this story to be told on screen since first reading Larson’s book in 2003. Whether or not you’ve ever been to Chicago, you’ll love The Devil in the White City for its story of sheer tenacity at the beginning of the industrial age. Holmes’ part of the story is very disturbing and I much preferred reading about Chicago’s glitterati racing against time to create a spectacle likes of which the world had never seen. But taken together, The Devil in the White City is a brilliant history tale which I highly recommend while we wait to see how the story plays out for Hulu.

Weirdly enough, DiCaprio also bought the rights to Shining Girls – an sf book by Lauren Buekes about a serial killer in depression era Chicago, which I originally thought was a riff on The Devil in the White City. I guess my confusion was understandable, given that I’ve read neither? Plus I have a sneaking suspicion there may be a third book in the mix, somewhere…..

Aon, you never fail to present interesting commentary. Though I had heard of the fiction novel The Shining Girls, I can’t believe I had never heard of Cream who actually did time here in Joliet prison for a murder conviction of one person, but likely a total of four. I guess he doesn’t make the cut as America’s first serial killer since there was only one murder on his record. The bones of what are likely dozens of people were found in Holmes’ “murder castle” but as forensics weren’t what they are today, the authorities could only ever prove 10. As a fan of Chicago history, I’m definitely going to look into Cream, whose murder(s) in Chicago predates Holmes. Thank you for sharing this.

I was thinking of The Case of the Murderous Doctor Cream. Cream spent some time in Chicago working as an abortionist. Not sure if he qualifies as a serial killer in the strict sense of the word, though he was active during the same period.

The slacker in the White City? I understand KR’s desire to complete his resume by playing a really bad guy, having already played several guys really badly.

Oh my – that was too easy, wasn’t it? Reeves seems like a nice guy and is a decent actor, but he’s one of those people who are – to me, at least – utterly unconvincing in a period movie. (Remember Bram Stoker’s Dracula? I’ll bet Keanu hopes you don’t.)

TPark, you actually made me snort my coffee out my nose this morning. Thanks.

Yes, Bram Stoker’s Dracula is one of my favorites for Gary’s performance, but Keanu’s is truly cringe-worthy. However, this is primarily because of that cheesy accent. For this project, everyone is mid-Western so he should be ok regardless of the role. He played a truly heinous character in The Gift and was frighteningly good. With Scorsese directing, I could see him playing Holmes…maybe.