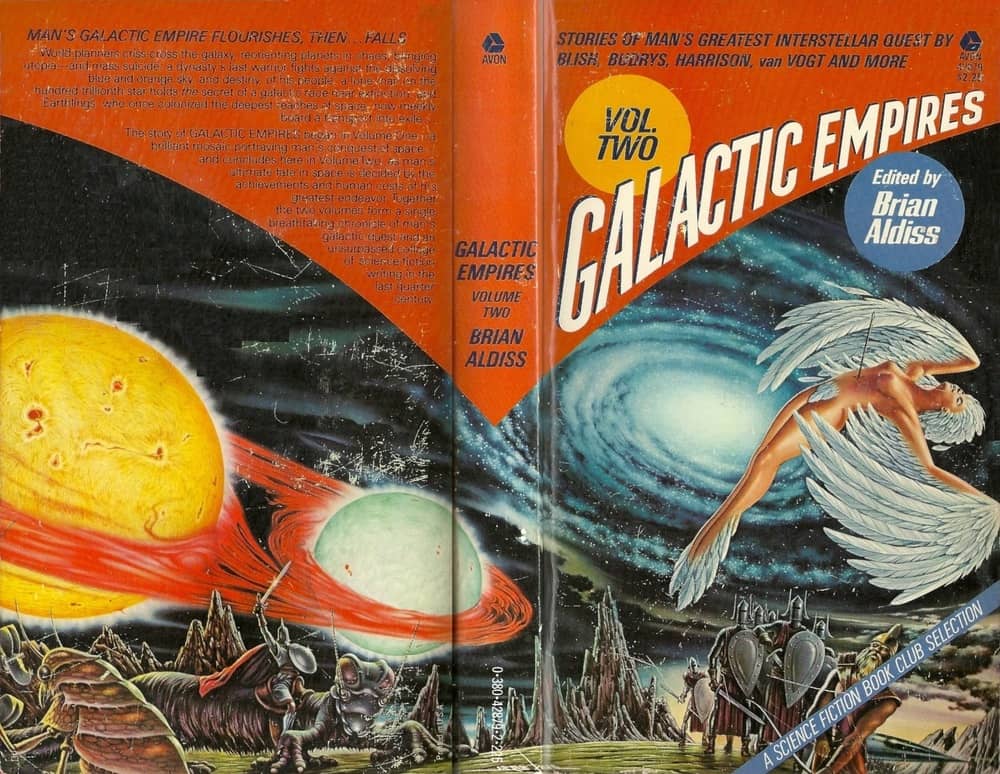 It’s the Christmas break, I finally have some serious reading time, and I know I should be trying some recent stuff. There are many promising new authors I’ve been looking forward to sampling, and I’m reasonably sure I even made a resolution or two in that direction a while back.

But here I am enjoying some old Brian Aldiss anthologies, and I don’t even have the decency to feel guilty. I’ve wanted to read these books for a while — somewhere around 40 years, give or take — and that’s a long time to be staring longingly at them on my bookshelf.

The titles in question are Galactic Empires, Volumes One and Two, both published in 1979, a fine curation of classic science fiction. They’re the second and third books in a very handsome four-book set of SF anthologies reprinted in paperback by Avon, with gorgeous wraparound covers by legendary artist Alex Ebel (best known for his classic Ursula K. Le Guin covers, including The Left Hand of Darkness and The Dispossessed). The other two anthologies include Evil Earths (1978) and Perilous Planets (1980).

Galactic Empires, Volumes One and Two is a feast of a set. It includes a veritable who’s who of 20th Century SF writers and their most popular series, including a Foundation story by Isaac Asimov, a Technic History novelette by Poul Anderson, an Instrumentality of Mankind tale by Cordwainer Smith, and a Sector General piece by James White.

Aldiss takes his weighty theme seriously, with a considered look at the concept of Galactic Empires. He includes a survey of stories from 1937 to 1975, with a lot of entertaining and informative commentary sandwiched in between. He breaks his selections up into insightful sub-themes, each of which is prefaced with a brief essay.

Aldiss looks at both the rise of Galactic Empires, and their inevitable decline.

Here’s the complete Table of Contents for Galactic Empires Volume One.

The books were originally published in hardcover in the UK by Weidenfeld & Nicolson in 1976, and reprinted the following year by St. Martin’s Press in the US. 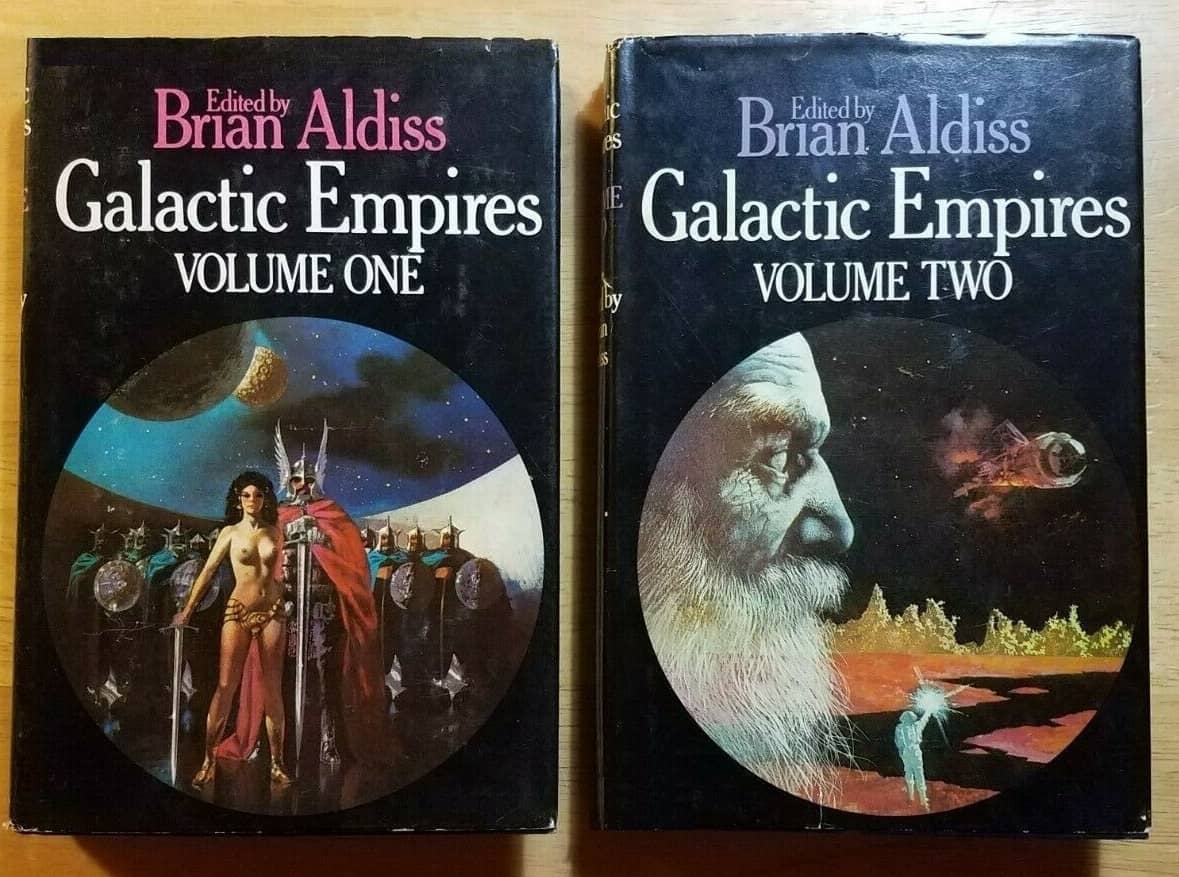 Here’s the TOC for Volume Two.

The books were reprinted in paperback in the UK by Orbit. 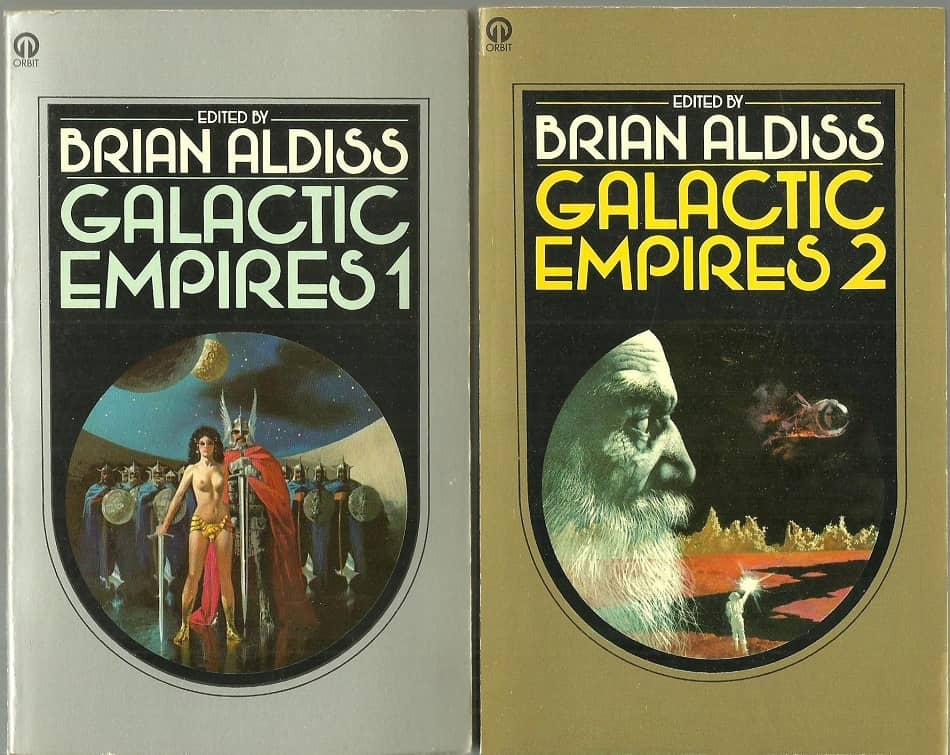 Here’s the complete pub details for the Avon paperback editions.

Both volumes were reprinted in an omnibus trade paperback by Legend in 1988. They have not been reprinted since, and these are no digital editions.

We previously covered one other book in the Avon series:

I have all of those Avon Aldiss anthologies. They’re just irresistible, with those gorgeous covers and all the treats inside. It’s almost more “good old stuff” than a body can stand.

Agreed! I wish they’d give Aldiss’ other anthologies from the same UK publisher, Space Opera (1974) and Space Odysseys (1975), the same treatment. Berkley eventually published them in the US, fortunately.

I have both of those too, and you’re right – the zing! factor drops without those great covers, worthy though the contents are.

I’ll happily (and possibly unjustly) take full credit for constantly banging on about those Aldiss Galactic Empires anthologies every chance I got. They (as well as Space Opera) were books I was repeatedly checking out from the library back in the day. I really need to go back and reread them (as well as read the other three, which I do now own).

Personal favorite stories include “Been a Long, Long Time” (which might be the only Lafferty I’ve ever read?) and “Rebels of Valkyr”.

Randomly, another anthology I loved back in the day was Clifton Fadiman’s Fantasia Mathematica. I think I still have our old copy somewhere, although at some point the glue holding the pages in seemed to have died the death.

And as always I’d _love_ to get digital editions of all of these, but I know that rights situations make that pretty much impossible.

Those covers are certainly beautiful. I would live to lay hands on them too. Joe H, I seem to recall comments recommending these before. I am very intrigued about the Horses in a Spaceship article.

These Aldiss anthologies have long been favorites of mine. With Joe, I’ll cite “The Rebel of Valkyr” as a particular favorite. It later became a the four book Rhada YA series, under the pseudonym Robert Cham Gilman.

[…] Empires (1979) collections off his shelf after they sat there for decades (you can read about it here). It struck me I’ve had Aldiss’s Galactic Empires on my shelves for nearly the same […]

Thanks for reminding me those GALACTIC EMPIRES volumes had been on my shelves for years, too! Your excellent review inspired me to finally read them. Here’s my take on those Aldiss anthologies: http://georgekelley.org/fridays-forgotten-books-672-galactic-empires-volume-1-volume-2-edited-by-brian-aldiss/

A fine review. Thanks for sharing, George. Have you read any of the others? (Evil Earths or Perilous Worlds)?