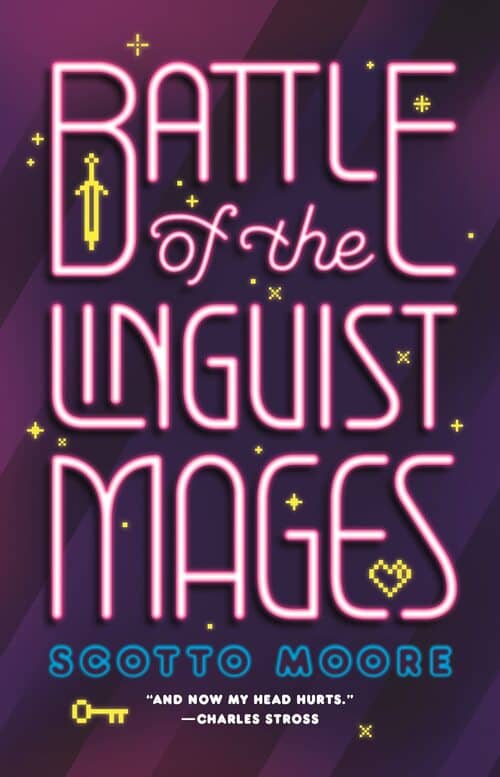 They’ve got a stellar line-up in place for next year as well, and we’re looking forward to sharing all the details. But the one I’ve got my eye on next month is Battle of the Linguist Mages by Scotto Moore, author of Your Favorite Band Cannot Save You (Tor.com, February 2019). Charles Stross says, “It reads like Snow Crash had a dance-off with Gideon the Ninth, in a world where language isn’t a virus from outer space, it’s a goddamn alien invasion,” and that sounds like something worth canceling a few meetings for.

Battle of the Linguist Mages is set in modern day Los Angeles, where a shadowy faction led by the Governor of California has developed the arcane art of combat linguistics, and planted the seeds of a future totalitarian empire. Here’s the publisher’s description.

Isobel is the Queen of the medieval rave-themed VR game Sparkle Dungeon. Her prowess in the game makes her an ideal candidate to learn the secrets of “power morphemes” — unnaturally dense units of meaning that warp perception when skilfully pronounced.

But Isobel’s reputation makes her the target of a strange resistance movement led by spellcasting anarchists, who may be the only thing stopping the cabal from toppling California over the edge of a terrible transformation, with forty million lives at stake.

Time is short for Isobel to level up and choose a side — because the cabal has attracted much bigger and weirder enemies than the anarchist resistance, emerging from dark and vicious dimensions of reality and heading straight for planet Earth!

See all our coverage of the best upcoming SF and fantasy releases here.