The great Jack Vance doesn’t get a lot of love from role players. Despite his huge influence on the field (Gygax based the fundamental cast-and-forget spellcasting system of Dungeons and Dragons on the Vancian magic system the author developed for his Dying Earth tales, just as an example), there aren’t a lot of ways to use dice to explore the wonderful worlds Vance created.

Twenty years ago Pelgrane Press released The Dying Earth Roleplaying Game by Robin D. Laws, which went a long to rectifying this artistic injustice. More recently Laws and Pelgrane Press took the versatile Gumshoe System, designed for running investigative games like Trail of Cthulhu and Ashen Stars, and used it as the basis for The Gaean Reach, a science fiction RPG set in the lusciously detailed setting for much of Vance’s best science fiction, including The Demon Princes novels, the Cadwal Chronicles, the Alastor Cluster trilogy, and the Ports of Call novels.

You don’t have to be a Jack Vance fan to appreciate the rich possibilities of the setting (though it definitely doesn’t hurt). Wikipedia describes the vast realm of explored space known as the Gaean Reach this way:

The Gaean Reach is a fictional region in space that is a setting for some science fiction by Jack Vance… The Gaean Reach includes all worlds colonized by humans, among which trade and travel flow freely for the most part… Some of these worlds are advanced and cosmopolitan, such as Alphanor; others, like Thamber, are inhabited by shipwrecked and forgotten people, who have reverted to feudalism. Some, like the world of Wyst in the Alastor Cluster, are undeniably strange in their culture and customs.

The period of the Gaean Reach spans several centuries, if not millennia, at an indeterminate but very distant time in the future… it is defined as follows: “the Gaean Reach encompasses a perceptible fraction of the galaxy. Trade routes thread space like capillaries in living tissue; thousands of worlds have been colonized, each different from every other, each working its specific change upon those men who live there. Never has the human race been less homogenous.”

Vance used his mighty imagination to spin many exciting tales across this vast canvas, including some sixteen novels (see the complete list at ISFDB).

For his game, author Robin Laws chose to give players much more focus, zeroing in on a dark tale of revenge. Here’s an excerpt from the introductory section:

In The Gaean Reach you play highly competent individuals of the distant future. Wronged in the past by a terrible foe named Quandos Vorn, you travel with a group of similarly vengeful companions, hunting him across the galaxy’s weird and various worlds. Dealing out dry witticisms and deadly laser fire in equal measure, you gradually gather evidence of his plans and whereabouts, all the while anticipating the coming day of your final confrontation.

The Gaean Reach is a compact and self-contained volume (108 pages), including a 17-page introductory adventure, The Cerulean Duke, in which the player characters foil the nefarious scheme of an ally of Quandos Vorn, the mysterious master criminal and anti-ecology activist known only as The Cerulean Duke, on the nature preserve planet of Chernil.

During the development of the game Robin Laws made a series of intriguing posts on the Pelgrane Press blog, including the one that first grabbed my attention:

I’m now in the early stages of The Gaean Reach, Pelgrane’s game of interstellar vengeance, based on the classic cycle of SF novels by Jack Vance… The game’s default campaign frame pits the characters against a nemesis, who they hunt by increments over the course of the series. Every group defines its own nemesis, usually called Quandos Vorn. During character creation, each player indicates what Quandos Vorn did to incur his or her PC’s wrath. This delineates both the nemesis and the player character.

In the in-house game, this is why the protagonists plot revenge against Quandos Vorn:

“After I critiqued his academic paper, he saw to it that I lost everything — my tenure, even my family.”

“I used to be a corrupt interstellar cop on his payroll, until he killed my partner and framed me for a series of crimes I didn’t commit.”

“When my casino would not accommodate his obscene requests, Quandos Vorn shut it down.”

“His ponzi scheme collapsed the star-spanning financial empire I was supposed to one day inherit.”

“To keep himself sharp, Quandos Vorn hunts, battles, and kills clones of himself. The only clone to ever survive one of these pursuits, I seek to avenge the humiliating defeat that left me hideously disfigured.”

From those five statements, we know much about Quandos Vorn’s behavior and capabilities — and even more about the people who seek him.

How does The Gaean Reach play if you’re unfamiliar with Vance? Paul Baldowski at GeekNative published a lively review from precisely that perspective.

The Gaean Reach reminded me a little of the science fiction of Buck Rogers and Flash Gordon, where most advancements in technology seem to be in hand weapons and floating cities. Rockets seem a dangerous form of transport at the best of times and humanity gets along with everyone else purely through force of arms and stern words. In space, no one can miss your terse and biting put down about your adversary’s suspect lineage.

The heart of The Gaean Reach lies in the Gumshoe system. Essentially, Gumshoe solves the age old problem of roleplaying sessions stopping dead because of poor dice rolls by ensuring the core clues – those that allow advance from A to E via B, C and D – never get missed. Characters can access other clues, that might prove useful, smooth the way, or reveal a sub-plot, through competence in one or more relevant Investigation abilities – like Bureaucracy, Flirting or Evidence Collection….

Strangely enough, one of the strongest reasons I can see for going out and buying The Gaean Reach right now is that it provides a great condensed version of the Gumshoe system. You get all essentials in a slim, attractive and easily portable volume, with some spiffy artwork…

If you enjoy your science-fiction investigation a little harder, then you should look to Ashen Stars. However, should you be good with piquant, pulpy and packed with erudite moments of vengeance and comeuppance-style of science fiction, then I suspect purchase of The Gaean Reach would be worthy of consideration.

There’s mischief going on; you must put an end to it! 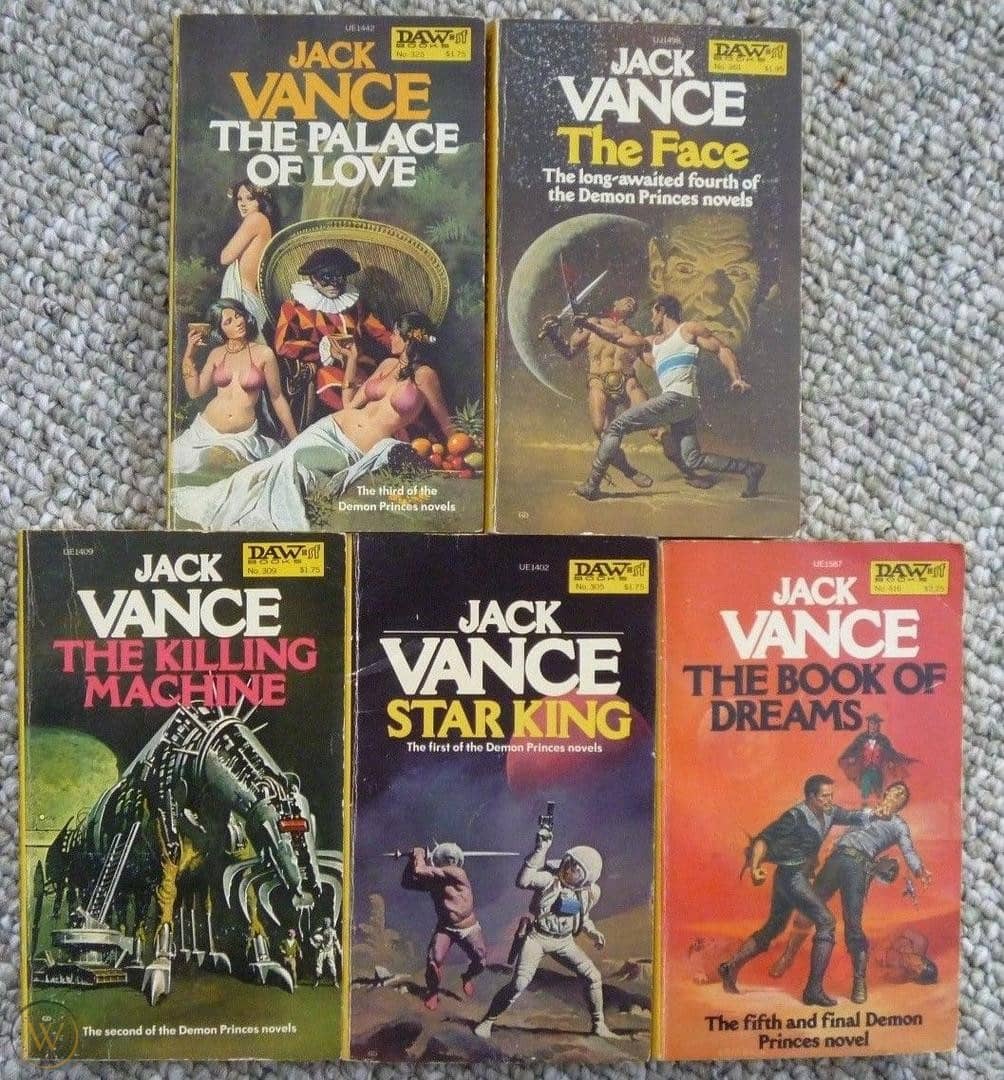 Pelgrane Press has released one supplement for the system: The Gaean Reach Gazetteer, written by Peter Freeman & Jim Webster, a 74-page encyclopedia of planets to visit. Here’s an excerpt from a detailed review at RPG.Net.

As the name says, it’s a compendium of locales in the Gaean Reach listed in alphabetical order, from Achernar to Zonk’s Star. Besides a short description of each, the entries include a reference to the novel and page in which the place first appears. Very useful if, as I said before, you don’t want to reread all of Vance’s pertinent works.

The bulk of the book (58 pages) is taken up by this gazetteer. The rest is filled with descriptions of currency, starships, technological items, computers, vehicles and weapons. The Gazetteer is written in character, as if it were a publication from the setting, authored by Jarim Oebs, Associate Interlocutor of Galaxeology [de-tenured], from Dagglesby University, in Cicely.

As such, it has no stats, only fluff, so to speak. Given how GUMSHOE works, this isn’t really a problem, but if you like mechanical details, you may get frustrated. This section does include a few acrid footnotes, though.

I was hoping for a bit more from the Gazetteer, which seems mostly like a rather dry reference work on the game setting. But it’s useful enough as a distillation of the information on the vast universe in Vance’s novels.

Both have covers and interior art by Chris Huth.

See more details, and order copies for yourself, at the Pelgrane Press website.

It’s no great task to come up with Conan-ish oaths and generic barbarian/fantasy blather when playing D&D or Pathfinder, but it would be a rare group that could produce the kind of ultra-baroque Vance-worthy talk that this would call for. It would be a blast if you had the right people, though!

Indeed! Much of the pleasure of Vance is in his dialog, and especially the way he crafted verbal sparring matches in far-future polite society. Robin Laws plays this up in the game (as I noted above, players are expected to deliver “dry witticisms and deadly laser fire in equal measure”), and it takes a special kind of player to rise to the challenge.

And yes — with the right players (and game master, or course), this would be a real pleasure to watch.

Both Dying Earth and The Gaean Reach rpgs use the “tagline” mechanic, which associates a Vancean proclamation with a character and rewards them for spouting it at appropriate (or hilariously inappropriate) times. Examples for “The Cerulean Duke” (as downloadable from the Pelgrane Press website) include:
“A true scientist would not hesitate to use his sense of taste!”;
“This would look lovely … from a distance.”;
“It’s not torture, it is Science!”;
“Your verbiage, here, I find to be absolute jargon.”

I dearly love RPGs that focus so much on (and rewards players for) storytelling.

Another one of my favorites is The Extraordinary Adventures of Baron Munchausen (1998), in which players sit around telling tall tales, and competing players can throw a wrench into the proceedings by adding an unexpected element to the story.

I very much like the way that The Gaean Reach sets up its Big Bad, Quandos Vorn, as the players not only lay out how he did them the dirty in the past to set up their vengeance quest, but also to give reasons why such highly competent individuals have failed in bringing Quandos to justice: “He controls the space navies of over 15 systems!”; “His super-science makes him impervious to normal weaponry”; “His ability to become non-corporeal has saved him countless times from my assassinations.” Any of which may be true or not as the referee wishes. What a gift to give the referee!

OK, on the off chance that you haven’t seen this, a live playthrough of Baron Munchausen with Mary Robinette Kowal, Hank Green, Pat Rothfuss and Divers Others from Nerdcon back several years ago. I was in the audience and it remains one of the funniest things I’ve ever seen.

Joe — I’d never seen this before, and it’s marvelous! Thanks for sharing. 🙂