John Joseph Adams was my editor on my first novel, The Robots of Gotham, so naturally I assume he is the leading editor in the field (you should too.) For the past seven years he has been editing The Best American Science Fiction and Fantasy with a strong line-up of annual co-editors, including Karen Joy Fowler, N.K. Jemisin, and Carmen Maria Machado. This year Veronica Roth joins him at the podium, the bestselling author of The Divergent series and Chosen Ones.

In “The Pill,” Meg Elison imagines that Big Pharma has developed a medication that can eliminate obesity and thoughtfully examines the dystopian effects of a society where choosing to remain overweight becomes a liability — and what happens to those whose lives aren’t really changed by the drug. Karin Lowachee’s “Survival Guide” explores what happens to students taught by an A.I. neural network that seems to improve comprehension but may be turning them into docile sheep in the process. And a devastating disease tests medical ethics in Karen Lord’s timely “The Plague Doctors.” The high point of the extraterrestrial entries, meanwhile, is Gene Doucette’s “Schrödinger’s Catastrophe,” in which a spaceship wanders into a section of the universe governed by different laws of physics. With these phenomenal selections, Roth nimbly demonstrates the genre’s continued potential for rich ideas.

For brevity though, you can’t beat Alan’s (mostly) one-sentence reviews of each tale at Goodreads. Here’s a few samples:

“Tiger’s Feast,” by KT Bryski — A surreal and terrifying escape from some heartbreakingly mundane schoolyard bullying.

“Crawfather,” by Mel Kassel — A great story about how family traditions can end up being toxic. Oh, and about a monster crayfish in a Minnie-soda lake.

“Our Language,” by Yohanca Delgado — The legend of the cigualpa, of women transformed, becoming smaller yet more powerful, invites comparison with James Tiptree, Jr..

“The Long Walk,” by Kate Elliott — Welcome to an exotic fantasy land (here there be dragons!) where women… still serve men, in all the usual ways. But not inevitably. A long story, as well as a long walk, but worth it in the end.

“One Time, a Reluctant Traveler,” by A. T. Greenblatt — A graceful and disturbing post-apocalyptic tale of a trek up a mountain to the impossible ocean at its summit.

“One Time, a Reluctant Traveler” by A. T. Greenblatt (Clarkesworld, July 2020)
“Skipping Stones in the Dark” by Amman Sabet (The Magazine of Fantasy & Science Fiction, November/December 2020)
“Brother Rifle” by Daryl Gregory (Made to Order, 2020)
“Schrodinger’s Catastrophe” by Gene Doucette (Lightspeed, November 2020)
“The Plague Doctors” by Karen Lord (Take Us to a Better Place: Stories, 2020)
“Survival Guide” by Karin Lowachee (Burn the Ashes, 2020)
“The Pill” by Meg Elison (Big Girl Plus, 2020) — Hugo and Nebula nominee, Locus Award winner
“The Beast Adjoins” by Ted Kosmatka (Asimov’s Science Fiction, July-August 2020)
“How to Pay Reparations: a Documentary” by Tochi Onyebuchi (Slate, August 29, 2020)
“Beyond the Dragon’s Gate” by Yoon Ha Lee (Tor.com, May 20, 2020) 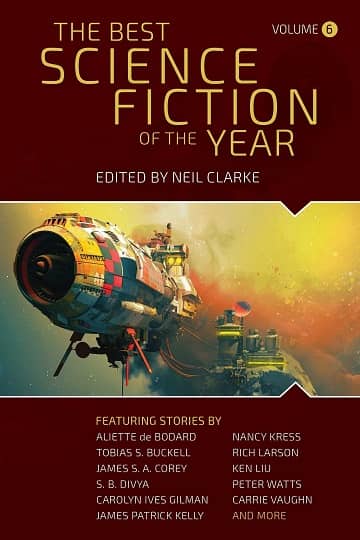 The Year’s Best volumes published this year include:

The pandemic era has played havoc with the usually-reliable release schedules for Year’s Best books. Rich Horton’s volume arrived in August — but it covers 2020, and his 2021 volume isn’t even scheduled yet. Neil Clarke’s book has been pushed out to January.

Worse is the rumors circulating that Strahan’s Saga book — and one of my favorites — has been canceled after just two volumes. If true, that’s terrible news. I hope the pandemic doesn’t claim any other publishing victims.

So, “American” would include Canadian? Or is it “American” meaning “US-Ian”?

and Mexico :p
this is a pet peev of mine when US says america and only means the states, weird one i know but…
now it makes me wonder if there are any mexican authors well known for SFF?

I think it’s American-meaning-published-in-the-US. So the authors can be from all over the world, but the editors only read American publications and anthologies.

It’s likely a way of keeping their reading load manageable, rather than any kind of genre statement. They probably include “American” in the title to signal that they make no claims to include fiction published in foreign sources.