I started buying science fiction magazines in 1977, after learning such things existed in the pages of paperback anthologies edited by my new favorite author, Isaac Asimov. I pedaled my bike off Rockcliffe air base in Ottawa in search of a corner store, and found one with a well stocked magazine rack. Hiding behind Better Homes and Gardens and the latest issue of Newsweek I found a row of compact marvels with colorful covers depicting spaceships and far planets. They included Analog, The Magazine of Fantasy and Science Fiction, Amazing, and the second issue of Asimov’s very own magazine, Isaac Asimov’s Science Fiction Magazine.

I still recall that bike ride home, clutching Asimov’s and Analog in one hand, and staying up late to read them. It was a good time to discover SF magazines. A lot of new writers were exploding on the scene. One of the biggest was Barry B. Longyear, who published his first story in Asimov’s in 1978, and in 1980 became the first person to win the Hugo, Nebula, and John W. Campbell Award for Best New Writer in the same year. 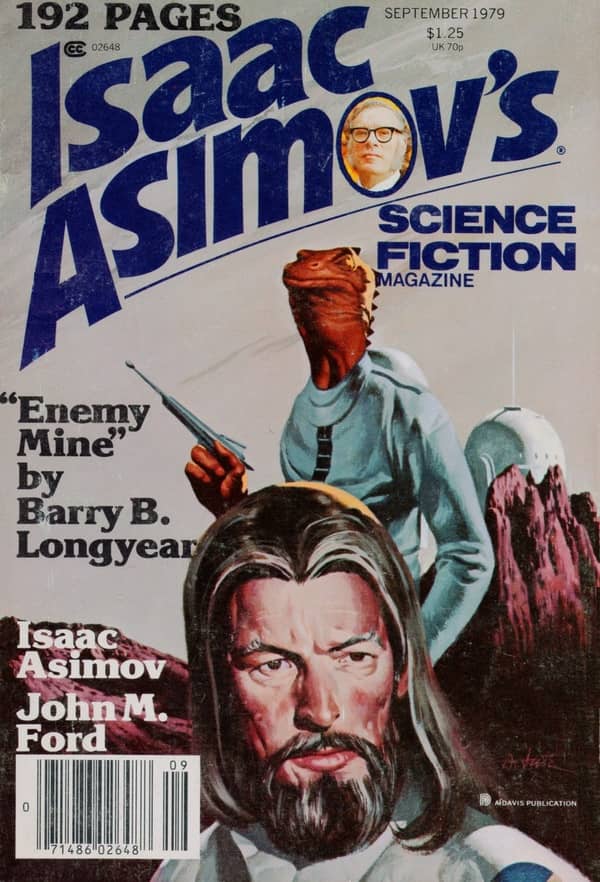 I followed Longyear’s career with great interest, and spent my teen years pecking out short stories on my dad’s typewriter and dreaming of having the same success. Long years later I published my own first novel, The Robots of Gotham in June 2018. It was auspicious timing — that year the science fiction community selected a June debut novelist to win the Hugo, Nebula, and John W. Campbell Award, matching Barry Longyear’s amazing achievement for the first time nearly four decades.

That person, sadly, was Rebecca Roanhorse. (Her book, Trail of Lightning, on sale one week after mine, is terrific, which was small consolation to my inner 14-year old.)

When I want to introduce modern readers to Longyear, I don’t usually suggest his popular Circus World series, about the civilization that arises from the survivors of a crashed spaceship carrying a circus, or his Infinity Hold trilogy, which relates the adventures of Bando Nicos, a murderer condemned to the prison planet Tartaros who becomes its first police officer. Instead I usually hand out copies of his 1980 collection Manifest Destiny, which contains his most famous work “Enemy Mine,” a novella that swept all the major awards in 1980, winning the Hugo, Nebula and Locus. 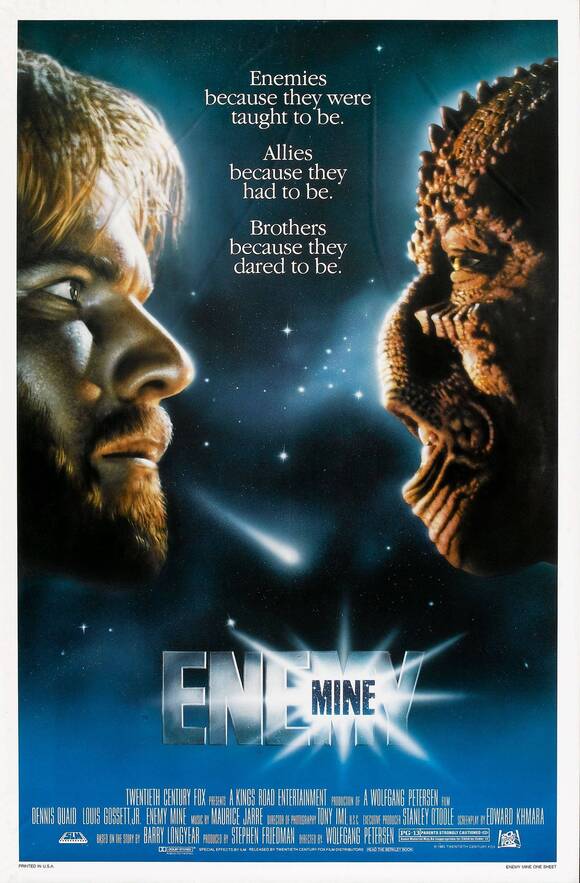 I’m a little embarrassed to admit that I first encountered “Enemy Mine” not in the pages of Asimov’s, but in the movie theater in 1985, watching the B-move adaptation starring Dennis Quaid as fighter pilot Willis Davidge, and Louis Gossett Jr. as the reptilian Drac he’s marooned with on a hostile alien planet. Sworn enemies who initially try to kill each other, they quickly learn that the only way to survive is to cooperate. It’s not a great movie, but I loved it in 1985 — especially the depiction of the mist-covered death world they’ve both crashed on — and I still find much to enjoy about it. I remain impressed with the ending, which is very nearly unique in the annals of adventure SF.

The film version of Enemy Mine was novelized by Longyear and David Gerrold in 1985. 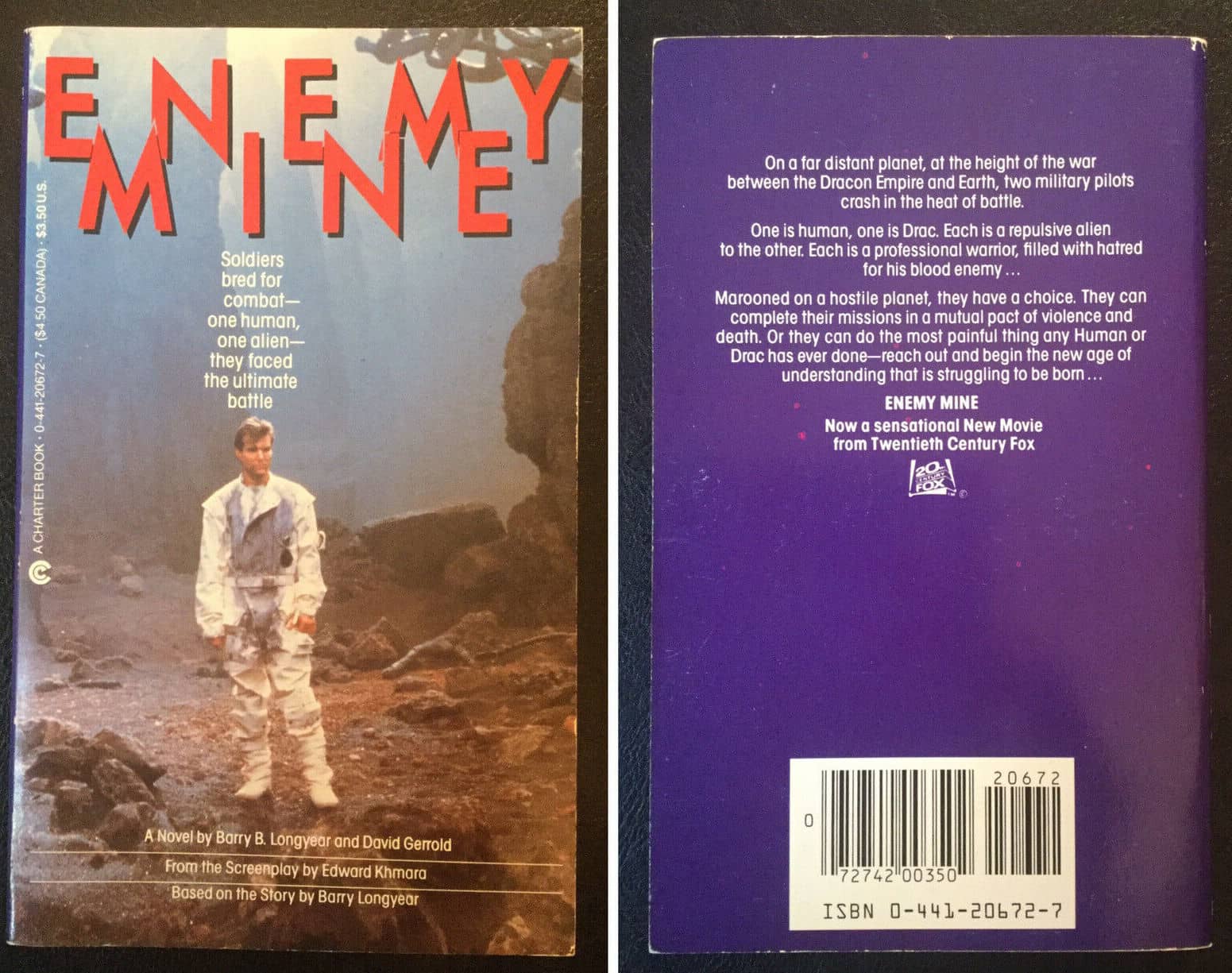 Enemy Mine novelization by Longyear and David Gerrold (Charter, 1985)

Longyear published the first sequel to “Enemy Mine” two years before the movie came out. The novel The Tomorrow Testament is set in the same war-torn universe where the United States of Earth and the Dracon Chamber are locked in a death struggle, and follows the adventures of Major Joanne Nicole, who begins the book as a prisoner of war and eventually becomes a trusted confidante of the Drac leader.

Fifteen years later, in 1998, the original novella and The Tomorrow Testament were gathered in the omnibus collection The Enemy Papers by White Wolf, along with an additional story, essays, and a brand new novel. 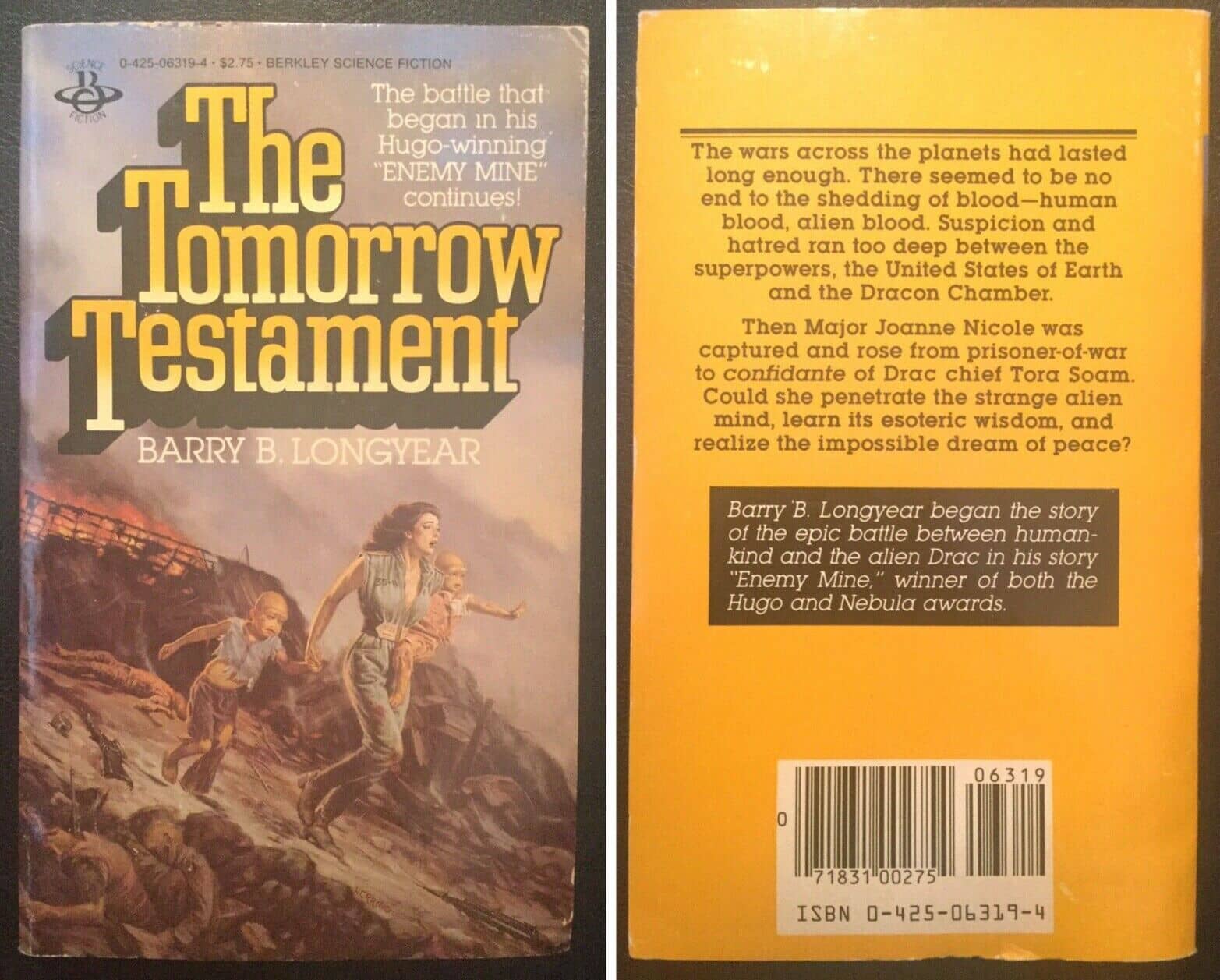 The version of “Enemy Mine” reprinted in Manifest Destiny is expanded from the magazine version.

For The Enemy Papers Longyear rewrote it again, producing a “Considerably expanded” version. It was bundled with a new short story “The Talman,” essentially excerpts from the Drac bible, a new novel The Last Enemy, and four essays by Longyear. The fiction contents are:

The Enemy Papers was originally published by White Wolf, and has been reprinted several times.

Circus World, “Enemy Mine,” and much of Longyear’s short fiction all set in the Quadrants Universe. The stories in Manifest Destiny share the same setting, including the novellas “The Jaren,” “USE Force,” and “Enemy Mine.” Only three stories were previously published; the rest are original to this volume

Manifest Destiny was reprinted in hardcover and paperback in the UK in 1982. Here’s the paperback edition.

Our previous coverage of Barry B. Longyear includes:

Manifest Destiny was a paperback original published by Berkley Books in May 1980. It is 245 pages, priced at $2.25; the cover is by John Rush. It has never been reprinted in the US, and there is no digital edition.

what a weird small world, i just watched a favorite youtube channel cover the movie Enemy Mine and then you talk about this author. I LOVED Enemy Mine as a kid, watched it a ton, had no clue it was a short story then turned book, so when they covered it i looked up the story and bought his novelization of it. then here you go talking about his other works. so odd…

i’ll probly expand my Longyear reading if not just to reward the author for giving me that movie in the first place. i also blame you as always,

I accept the blame, as usual. :). I was 21 when this movie came out, and I think I liked it almost as much as you did as a kid. It’s a kid’s film in many ways, with just enough scares to make it feel adult.

According to the Internet Speculative Fiction Database, Longyear stopped writing SF around 2011. Then in 2019 he popped up again, publishing the novel Turning the Grain, followed by the complete 7-novel series The War Whisperer in 2019-20. All eight books were published by Enchanteds Publishing, or self-published.

There’s no website for Enchanteds that I can find, but Amazon list the books as still in print. Anyone out there tried any of Longyear’s recent SF?

I loved “Enemy Mine” back in the day– in fact I re-watched it for one of my ‘Belated Movie Reviews’, but I think I didn’t finish it and it’s gathering dust on my hard drive.

Does that mean it didn’t stand up to a re-watch?

Oh, it stood up alright, but I was just lazy. Blissfully lazy. I might dig up the draft and see how close I ever got to finishing it.