“Reklaw” is a 12-minute short by Polaris Banks, starring Lance Henriksen playing somewhat against type as the pacifist ringleader of a group of talented vigilantes who drive around trying to keep people out of jail by destroying evidence before the police arrive. We learn this through watching one specific case where they attempt to save a woman from the law only for violence to rear its head. The film moves well, with an interesting structure and a few clever ideas, and there’s a good mix of men-at-work humour with serious commentary on society. But the backstory’s opaque, and probably could have used more room to breathe. There’s an interesting idea here, which could make a feature film or a TV show (and indeed Banks has said the short’s a proof of concept), but is probably not displayed at its best in a single 12-minute short.

Bundled with the short was Yakuza Princess. It’s a Brazilian film, from director Vicente Amorim, who co-wrote with Kimi Lee, Tubaldini Shelling, and Fernando Toste. They were working from a graphic novel called Samurai Shiro, by Danilo Bayreuth, which I have not read. It’s an action movie based in the Japanese community of Sao Paolo, Brazil.

20 years ago there was a massacre of a Yakuza clan in Japan. Today, Akemi (Masumi) is a young woman in Sao Paulo’s large Japanese community who has grown up studying swordplay but unaware of certain key truths about her family. Elsewhere in the city, a young man (Johnathan Rhys-Meyers) with amnesia, nasty battle-scars, and a katana wakes up in a hospital. The film proceeds to bring these things together, with a healthy dose of gunplay and swordfighting.

There’s nothing terribly surprising in how it plays out, and whether you’ll enjoy Yakuza Princess depends on how interested you are in a visually stylish action B-movie that’s otherwise standard. There’s nothing really subpar about the movie, but little that’s above average or particularly memorable. The story’s structured well, with spaces for good set-pieces that feel different from each other and do different things. But while it’s expansive, it’s also predictable. If you want a movie that does the typical things that other movies in its genre do, but in an unusual setting, Princess will serve.

Probably its biggest drawback is its lead actress. Masumi (who has only the one name that I could find) is a singer and this is her debut feature film. She handles the physicality of the role well, but doesn’t get across the emotions of her character. She’s also unable to communicate an arc for her character. Conceptually you can see how Akemi begins in one place and ends in the film in another, prepared to go on to have adventures that would have been unthinkable to her before this story began. Practically, though, there’s not much of a sense communicated of her growth. 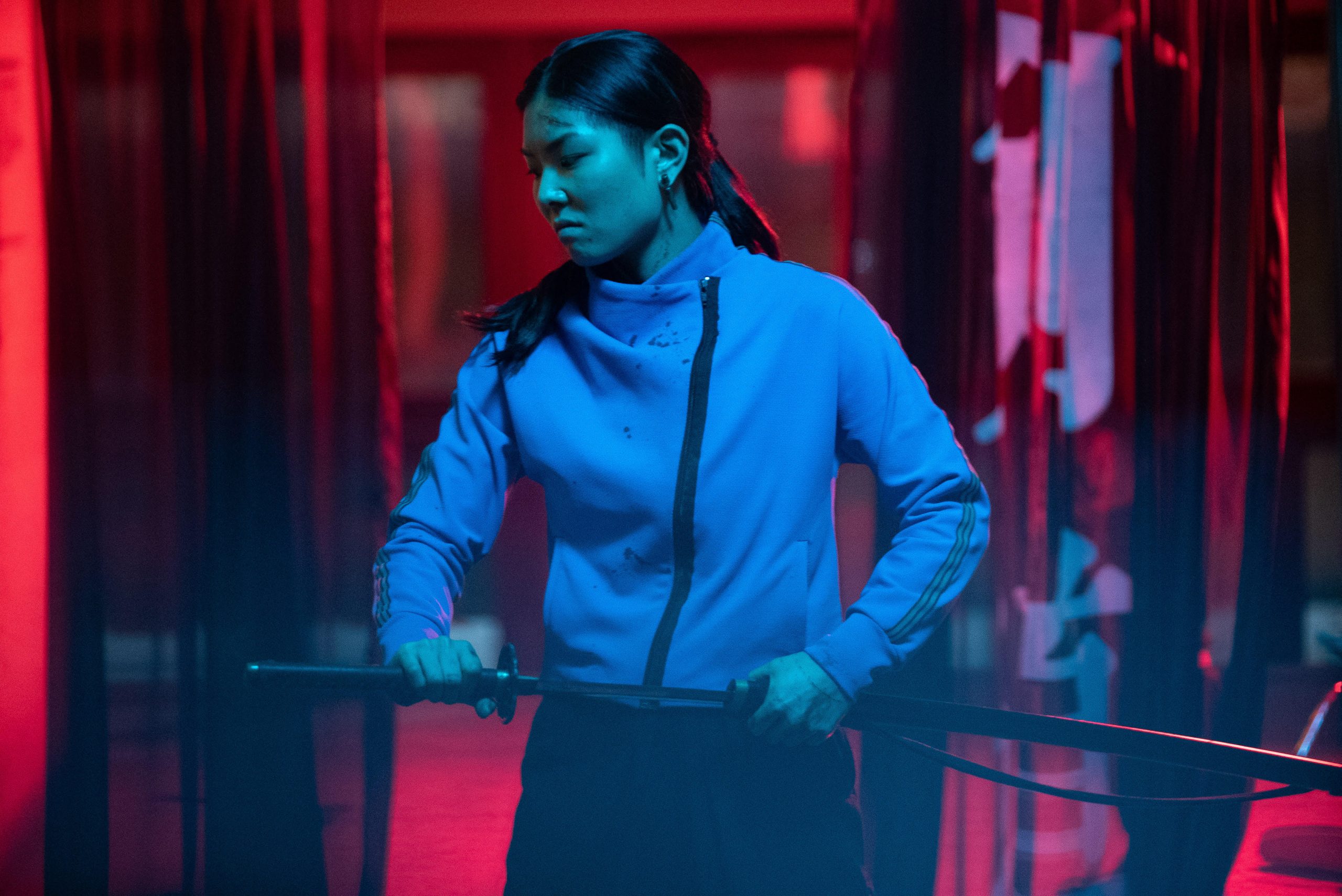 Beyond that, there’s a general reliance on action-movie clichés without a sense of gleeful abandon — cliché used as absence of thought, rather than cliché used out of a joy in hitting specific genre notes. So there’s an early scene with Akemi being trained by her wise old swordfighting teacher, and he gets lines like “You and your sword must become one,” and “have I taught you nothing all these years?” There’s a blandness, a sense of the writers not pushing themselves to create something distinctive.

Still, there is in other places a tightness to the dialogue. This helps the feel of the film, particularly early on when action-movie things are happening with no exposition or background. The fine cinematography and pacing draws us in, creating some evocative moments — a good chase scene, for example, after a good three-way fight. Because things aren’t explained, we’re in suspense as we watch events we don’t really understand. Which is the sort of thing that can be bad or good; here it’s good because it spurs the viewer’s imagination without alienating them or leaving them confused. 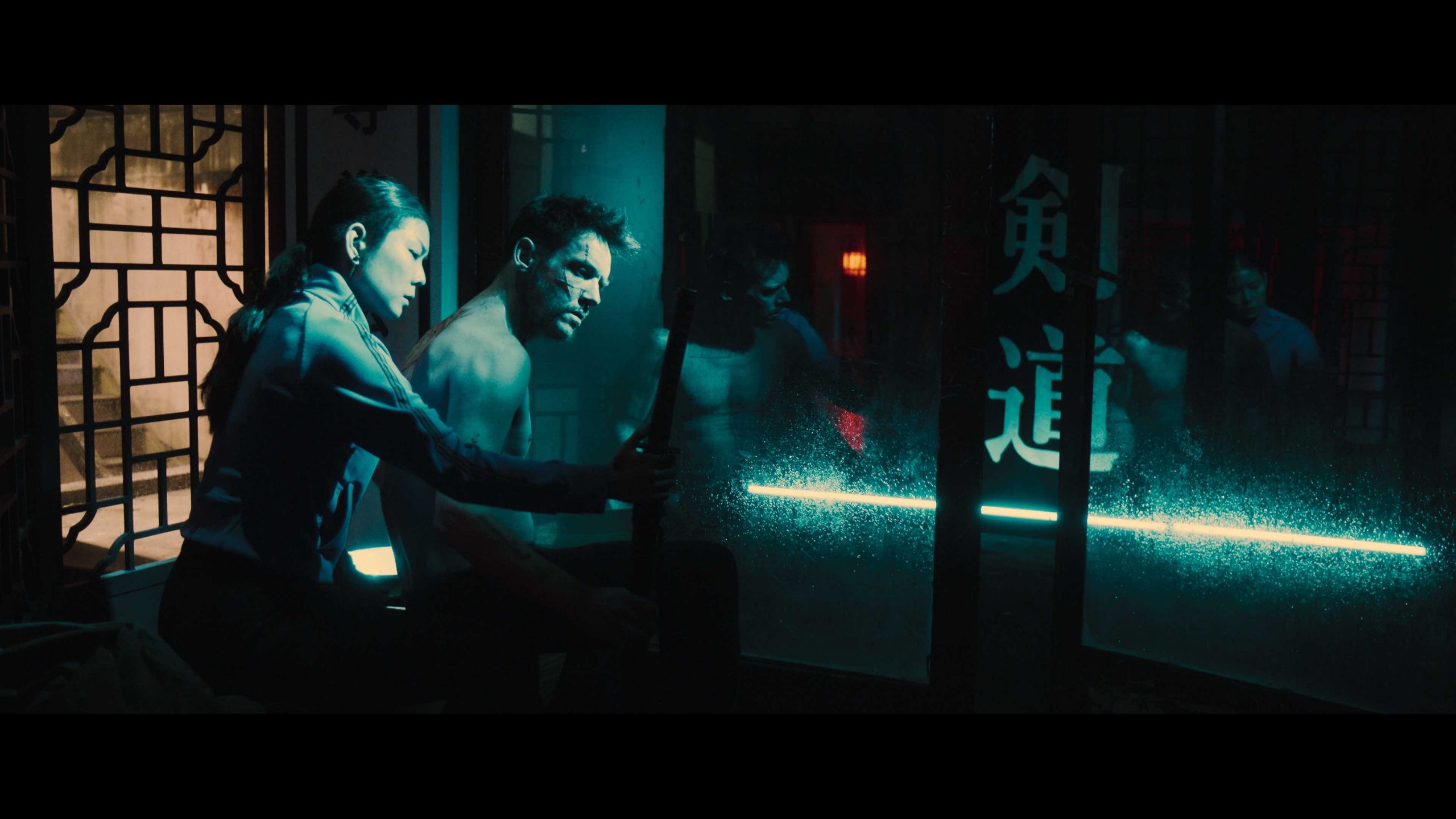 Of course, inevitably exposition comes in, and the movie slows down, and the action becomes more predictable. There’s a nice set-piece immediately following the exposition, involving a fight in a graveyard. And the final fight summons up a good intense feel. Generally the set-pieces are solid, with distinct visual styles and emotional tones. With the possible exception of the graveyard fight I didn’t find that there was the sort of extended scene that has its own detailed structure, nothing that lasts long enough to instill a real sense of action-movie euphoria. Which is a problem in a movie that’s principally about action.

Visually, as I’ve said, the movie’s striking, with lots of night-time scenes giving the sense of a world that lives after midnight. It’s a world of shadows and mist and rich colour, especially lively in the many scenes set in downtown Sao Paulo. The city’s shot with love, and makes for a neon-lit wonderland in which the characters to go about their business. It’s not necessarily the sort of thing that’s worth the price of admission in itself, but it is something that’s a strength of the movie, and gives a bit of grace to the straightforward action beats. 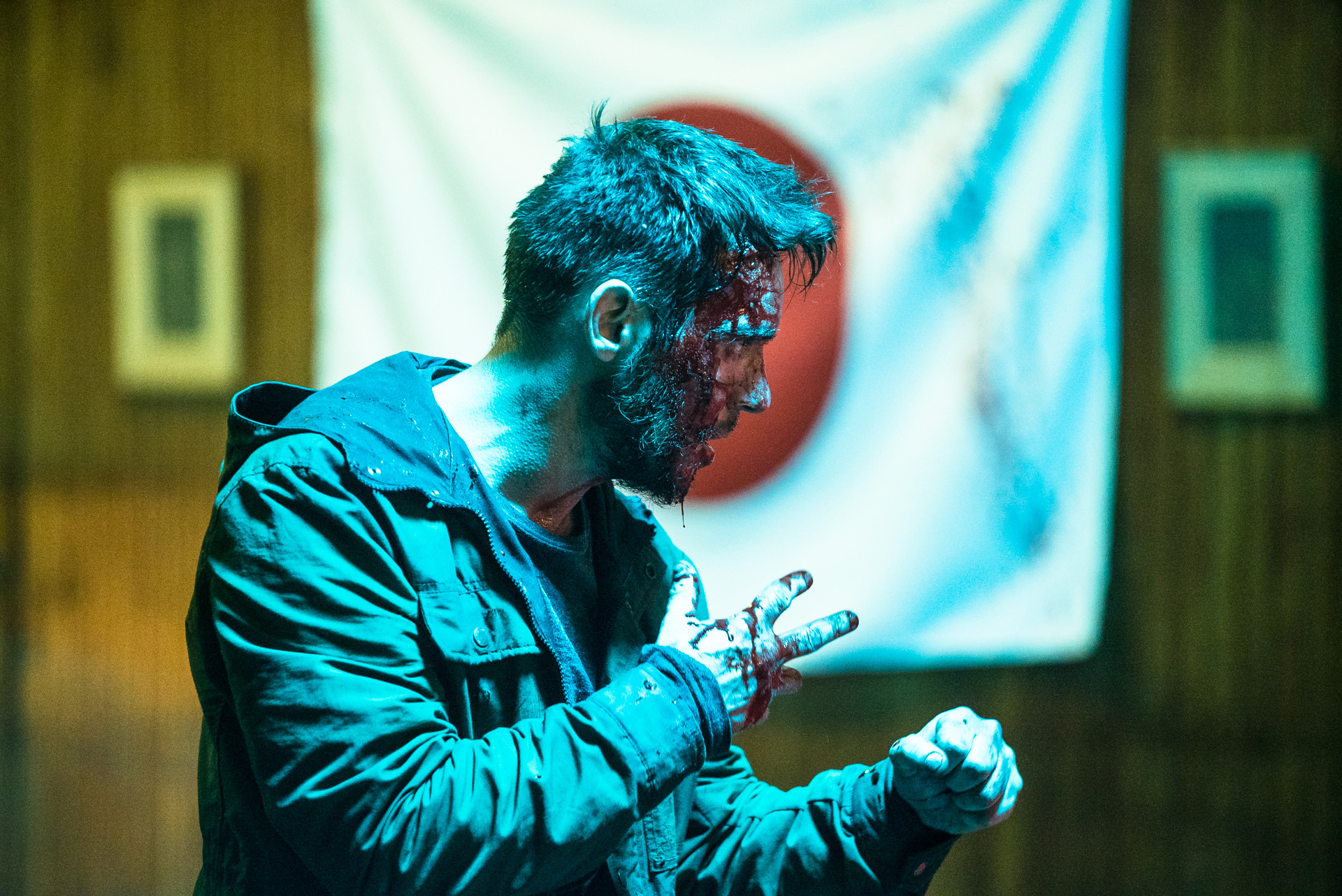 The mixture of Japanese culture and a Brazilian setting is interesting, especially handled with the straightforwardness we get here. Sao Paulo has one of the largest Japanese communities in the world outside of Japan, and we get brief glimpses of what that it’s like in that community, what kind of relationships people there have with Japan and with their city. These things tend to be asides, though, not worked into the fabric of the film so much as the sort of bits that get thrown into an action script to establish character. They’re effective as far as that goes.

Japanese culture more broadly is used with earnestness but with, if not exoticism, at least a heightened sense of distance from the West. The way a certain mystique around swordplay is used, the choice of what terms to translate and what to leave in Japanese, maybe even the depiction of the Yakuza, all feel a bit like the sort of thing one saw in Western media 30 or 40 years ago as creators tried to assimilate cultural concepts that were sometimes similar to what they knew and sometimes quite distinct. For me personally as I watched the movie I was particularly reminded of the Claremont-Miller Wolverine limited series, which married a sharp visual style to some simplistic depictions of Japanese culture. The visual style here isn’t as strong as that comic, but thankfully neither is the exoticism. (Oddly enough, I wasn’t reminded of The Wolverine, the movie very loosely based on the limited series.)

Whatever specific reference point you prefer, Yakuza Princess has a lack of originality at its core. It’s a genre story that hits its marks and doesn’t innovate much beyond certain elements of its setting and character backgrounds, which themselves aren’t allowed to affect its story structure. It’s adequate for purpose; go in expecting a straightforward action movie, and you won’t be disappointed.