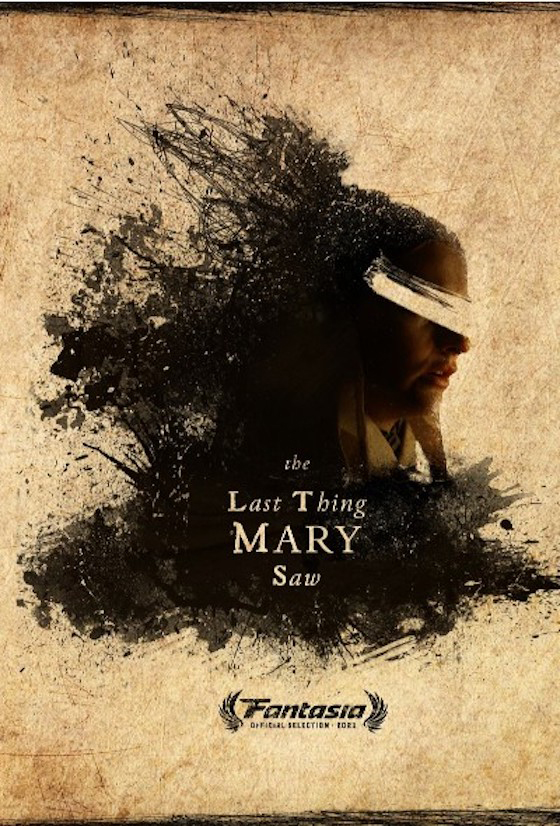 “Miss Mary Mack” is an 18-minute short horror film from American writer/director Tim True. Set in Seattle in May 2020, it follows sisters Sarah and Izzy (played by real-life sisters Sydney and Lexie Lovering), who are home alone as their father goes to visit their mother in hospital. Sarah, older and gothier, meddles with the occult and plays a joke on tween Izzy. But then Izzy starts to act a little odd, and it’s soon clear there was more going on than a simple joke. Unfortunately, after a slow build to get to this point, the film does little with its premise, ending when Sarah’s about to understand what’s happened. The acting here is good, but the visuals are drab; it’s one thing to try to tell a horror story without the traditional heavy atmosphere, it’s another to substitute nothing in its place. There are some interesting ideas here, and the use of the traditional clapping game that gives the film its title is strong, but ultimately nothing much comes of this story.

Bundled with the short at was The Last Thing Mary Saw, the feature film debut of writer-director Edoardo Vitaletti. It’s a period horror story set in rural New York state in 1843, among an isolated religious community in the town of Southold. It opens with a blinded young woman at a trial, then flashes back to give us the tale. The blinded woman is Mary (Stefanie Scott), the daughter of one of the leaders of the community; as her story starts she’s in love with the family’s maid, and forbidden romance has blossomed. And we see the forces of reaction squash it. Then Mary, with the help of a mysterious stranger (Rory Culkin), tries to find a way out for herself and her lover, and we see what consequences follow.

To start with what I felt was the best thing about the film: it looks spectacular. Camera angles are well-chosen, costumes and set design work wonderfully well, shadows give a nice texture to images. The movie was shot in an actual old mansion in New York, and the sense of place is strong. The atmosphere both of repression and of that repression creeping back as uncanny horror comes across tremendously well.

Unfortunately, I found the film itself narratively slack. It’s only 89 minutes, but feels long because the story never comes to life. The background of the community isn’t established in enough detail to make the characters coherent. I can see that there’s a temptation to go for atmosphere in a horror film, and that atmosphere can arise in the absence of explanations and details, but this film to me leaves too much about the place and the family at the centre of the place undefined. As a result the events of the movie seem to happen at a distance — you watch them while trying to puzzle out how they follow logically from the setting. 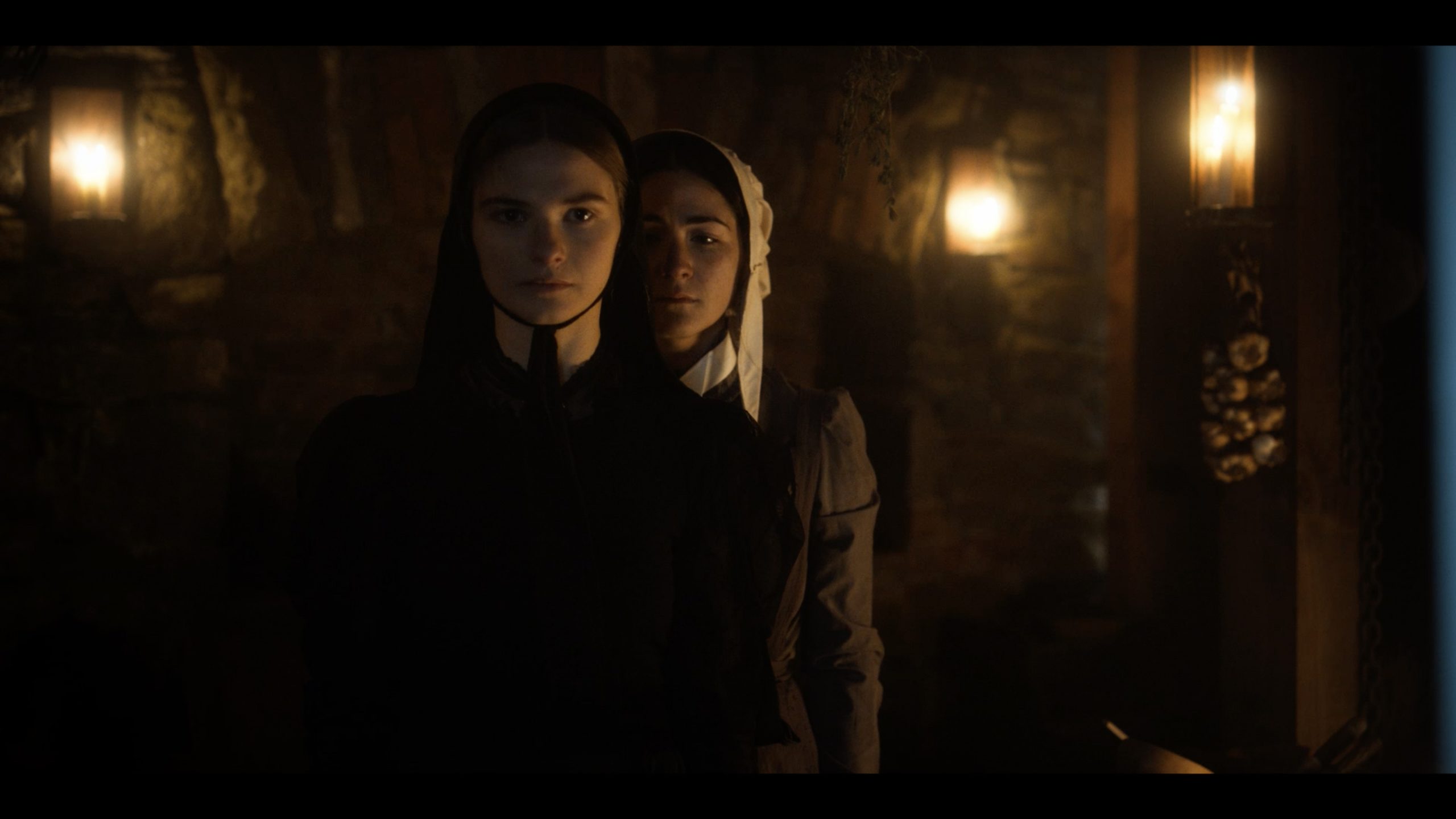 This grows worse as the movie goes along. Elements of the supernatural are introduced, but with no obvious connection to each other or to the central love affair. Magic is less sinister than baffling, as you wonder why certain things happen at certain times. And the climax has not one but three different moments that challenge one’s suspension of disbelief; a young woman is punished by being stripped to her underwear and bound and left to sit only a few feet from where a repressed religious family is having a family dinner; a man doesn’t react at all for a solid minute after his family drops dead around him; and another man holds two people at gunpoint while reloading the gun. Which is a period caplock gun that takes a good minute or two to load, during which the gunman’s not only unarmed but has his hands full, and his two would-be prisoners simply watch him as he works. You wonder why the script didn’t simply give him a second gun.

I’ll also say that I don’t see that the film gains anything from the flashback structure. There’s no sense of foreshadowing that builds up, no sense of any particular narrative or thematic reason for opening after the majority of the events of the film. In fact, I found myself wondering a few times how Mary could know about events in certain scenes she wasn’t around to see. 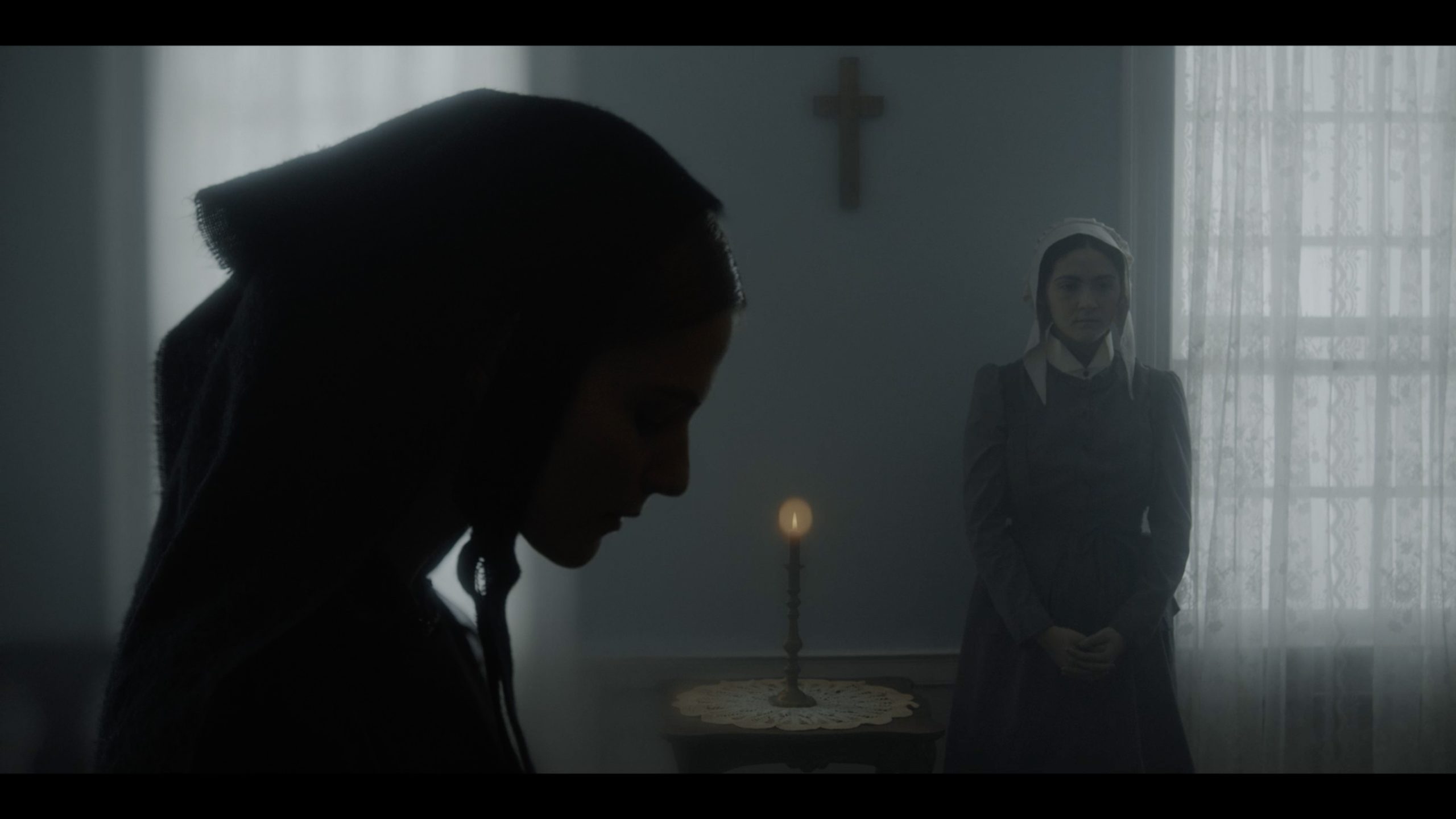 The trial aspect also raises questions about the nature of the community, and what their beliefs actually are. The film opens with a quote from Calvin, and the general feel of the household is certainly a kind of extreme Protestantism. Beyond that it’s difficult to say. While a detailed exposition of the theology of Mary’s family is unnecessary, there is a need for some kind of dramatic scene that would give them some definition and individuality. The general air of repression is clear, but there’s a lack of specificity that reduces the religious aspects of the story to stereotype.

This might also be why the occult elements feel underdeveloped. The magic doesn’t make for a useful contrast with religious orthodoxy because the orthodoxy’s so rudimentary. In general it’s clear that magic is a real thing in the story, but it’s not clear why; that is, the story doesn’t use the magic to advance theme or character or even really plot. It struck me that the figure who uses magic might have had a more interesting story to tell than the main characters — if we were given a chance to understand the contradictions of that character and their position, the movie might have had more interesting ground to explore. 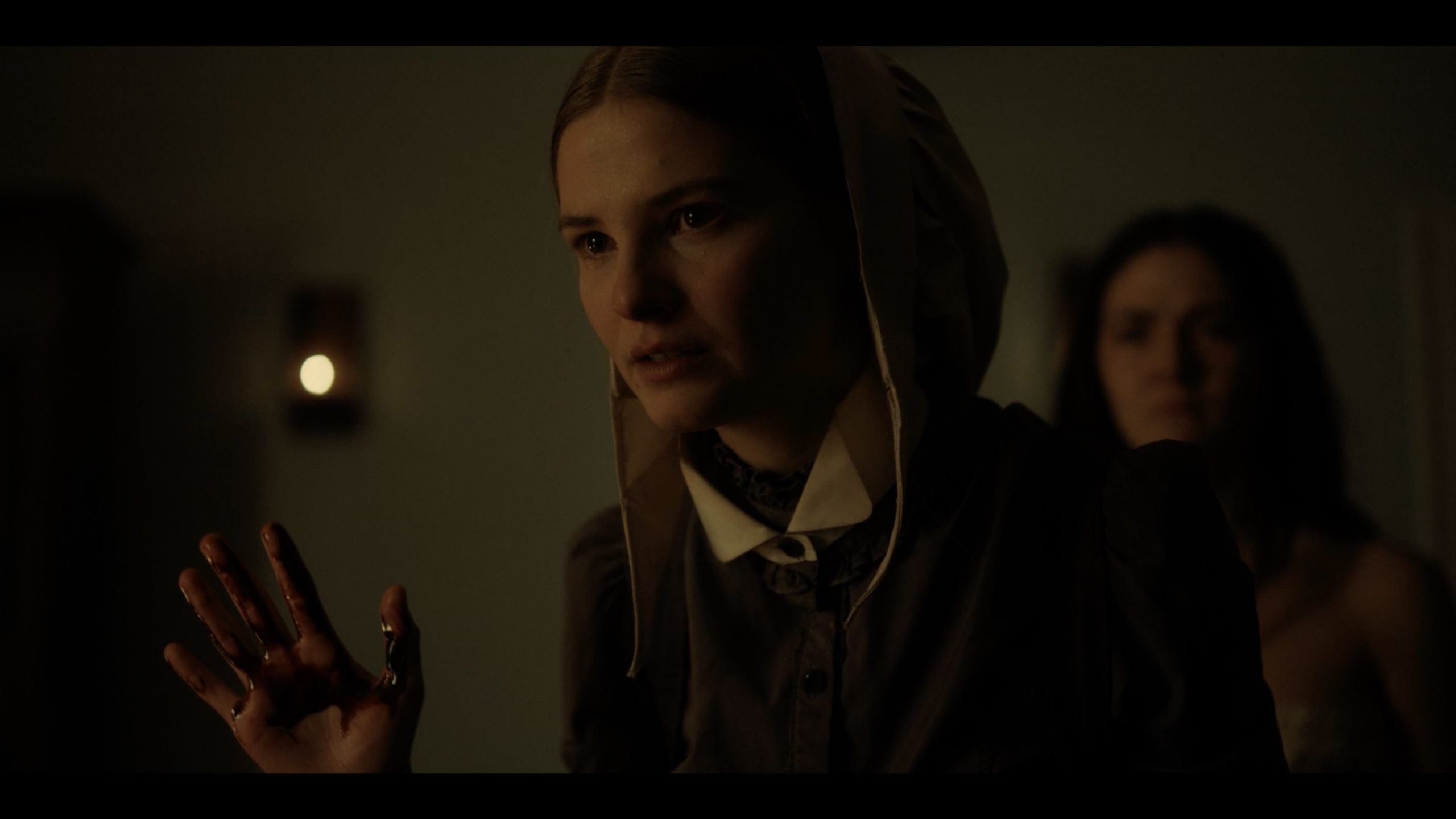 As it is, the lesbian love angle is at least handled in a non-exploitative way but also without any distinctiveness. Again, the relationship of the young women is underdeveloped. Their love never comes alive, not due to performances so much as script and structure; there aren’t any scenes that make the love real. And, again, neither characters have a grounding in a coherent background; you have to assume a lot.

This failure to bring the characters to life is the critical failure of the film, I think. Everything else that happens derives from the love affair, so with that not working, the rest of the story falls apart. Theoretically, the love the characters have could at least have stood as relief from the dark visual atmosphere; that never really happens, nor in general do the characters convey any sense of joy in their love. The relationship’s no relief from the movie’s downbeat feel, which is not helpful when passionate love drives the story and pushes the characters to seek escape. The absence of hope is too complete. 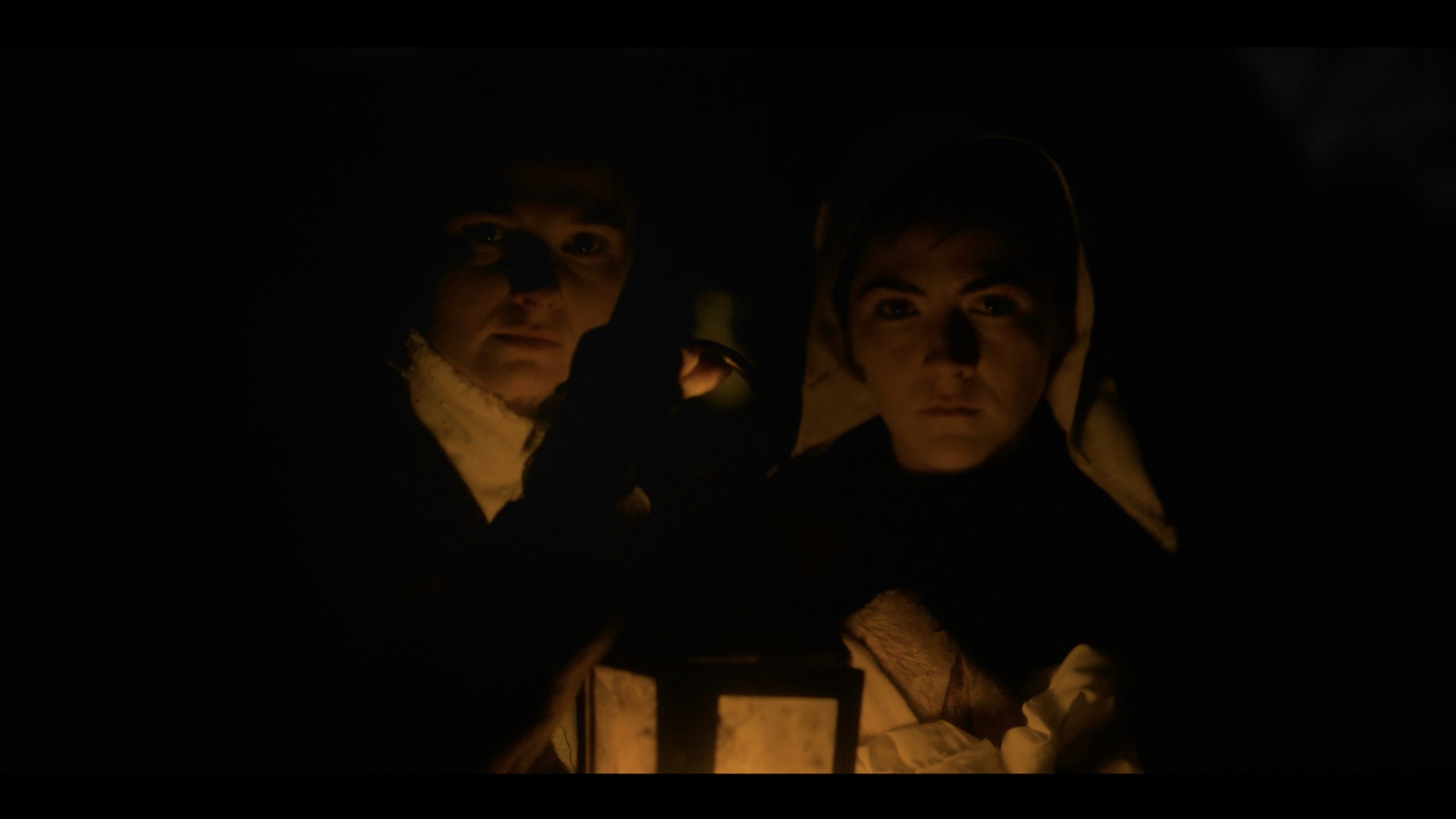 Overall, it’s difficult to avoid thinking that The Last Thing Mary Saw is an exercise in visual style. Some shots were less interested in advancing the narrative, I thought, than in building atmosphere. Which is fine to a point — atmosphere is a component of story — but in this case the story’s so lacking that the atmosphere soon becomes uninteresting. I like much of what this film is trying to do, but for me it ends up as style over substance without much distinction to the style.