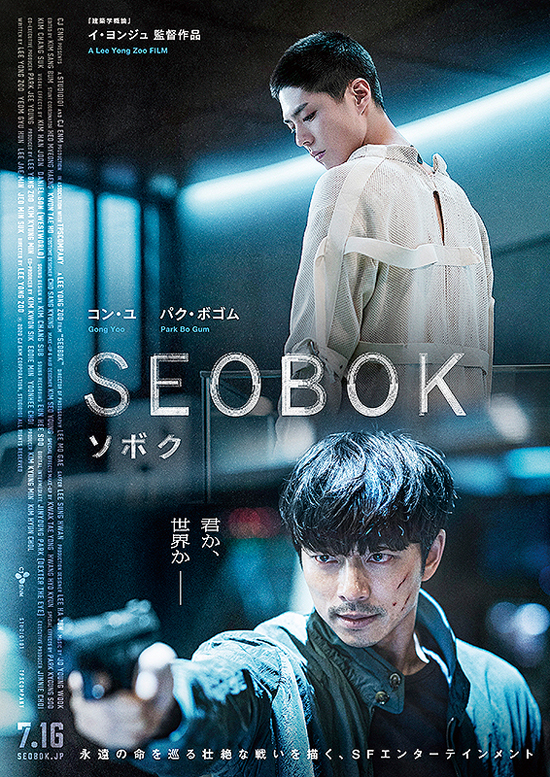 I closed out the fifth day of Fantasia 2021 with another short-and-feature bundle. “Vulnerability” (“Seijakusei”) is a 26-minute piece from Japan, written and directed by Eiji Tanigawa. It was made as an episode of an anthology TV show for FOD, the streaming arm of the Fuji Television Network; “Nogizaka Cinemas -STORY of 46-” is a show featuring idol group Nogizaka46, with each episode starring a different member. “Vulnerability” is a mixture of detective story and near-future science-fiction that plays out a little like Blade Runner if the replicants weren’t really that advanced.

In the year 2027, the Messiah lifestyle support androids (all played by Shiori Kubo) are perfect duplicates of human beings, with the rudimentary personality of a digital assistant. Something odd’s going on with their owners, though, who are displaying strange outbursts of violence. Two cops try to find what’s happening, but will they prove vulnerable to the weird effect? It’s a well-told story, with very strong visuals, an intriguing theme about living with digital perfection, and a good structure that ends in a surprising place. It won Fantasia’s International Short Film competition, and you can see it for yourself here.

The feature that accompanied the short was Seobok (서복), a science-fiction story from Korea with action and espionage elements. It follows Min Ki-hun (Gong Yoo, Train to Busan), a Korean secret service agent now retired and afflicted with a fatal brain tumour. His former superior, who he neither trusts nor likes, calls on him for one last mission — which might save his life.

It turns out that a private research company has created the first human clone — indeed, the first meta-human clone. Seobok (Park Bo-Gum) has an artificially-tweaked genetic structure. He’s psychic, immortal, and may be the key to eliminating disease and aging in others, perhaps including Min’s tumour. Only somebody’s attacking and killing people involved in the project that created him. Min agrees to protect Seobok, but after a dizzying series of betrayals the two end up on the run together. And there is a further problem: Seobok needs to have regular injections of inhibitor cells, or his own artificial biology will kill him.

At this point, roughly the end of the first act or first quarter of the movie, things start to slow down. Seobok‘s moved quickly so far, introducing characters and setting up double-crosses and staging a couple of excellent set-pieces. But much of the next hour follows Min and Seobok navigating the world, as Min tries to explain the nature of human life to an artificial man. 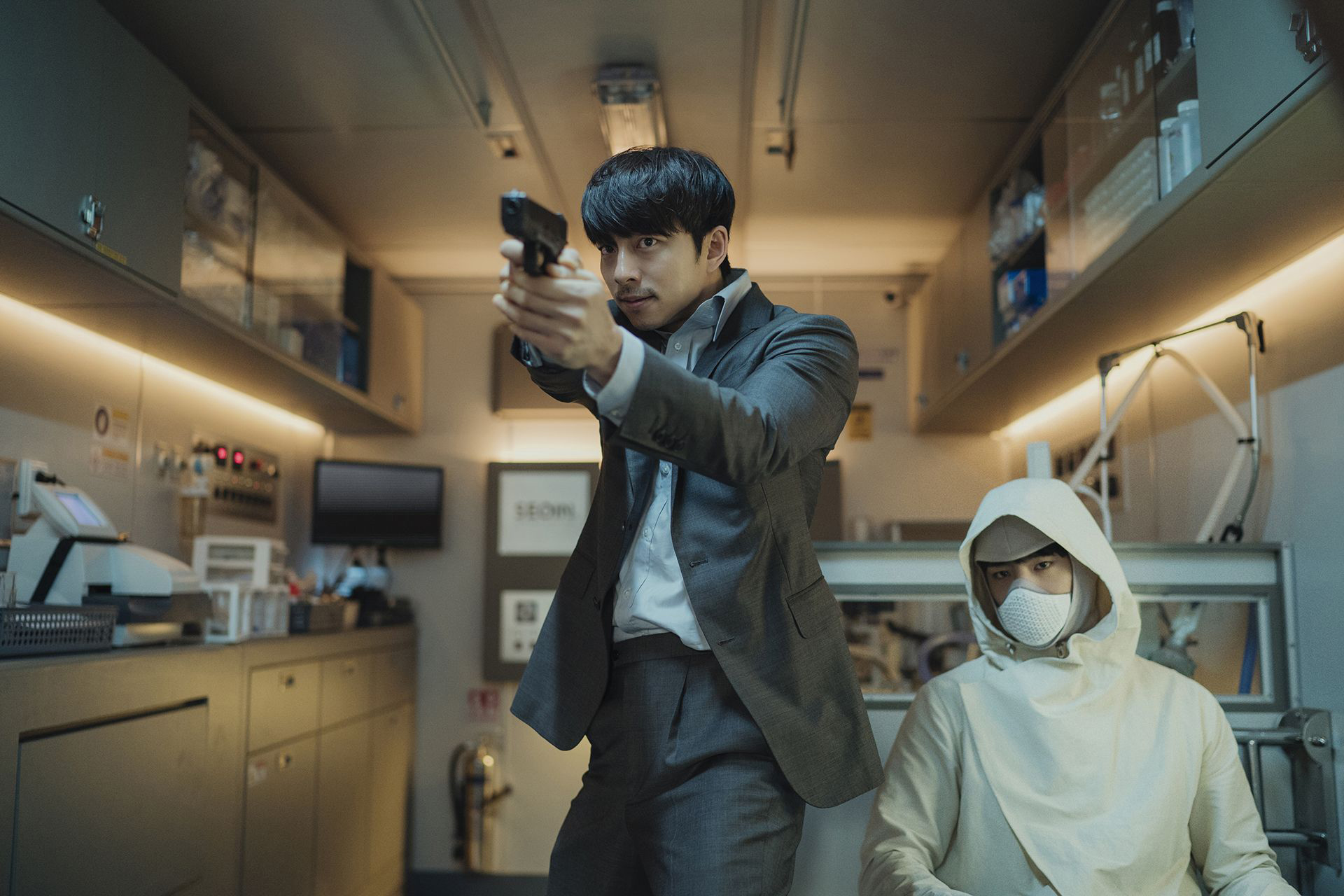 This is a familiar structure: the veteran and the rookie, the human and the alien innocent of Earth’s ways, the road movie, the buddy movie, all these things are in there. The problem is that there’s nothing particularly original in this aspect of Seobok. The mismatched odd-couple pairing is solid enough, and the acting’s certainly competent, but there’s a lack of anything truly exceptional. There are some philosophical musings, about the nature of life and where meaning is to be found and what our responsibilities are to each other, but nothing original or distinctive enough to give the road-trip aspect any particular interest.

The action-movie and spy-movie elements fare rather better. The action’s solid, to start with. And the plot maneuverings behind Seobok’s creation, and especially the struggle over who gets to control him, are intriguing in a way that Seobok’s wanderings with Min are not. The mysteries aren’t particularly complex, but they play out well. I don’t know that there would have been enough to this plot strand on its own to carry a movie, which may explain the road-movie strand of plot: the movie puts two difficult kinds of film together to broaden its story. 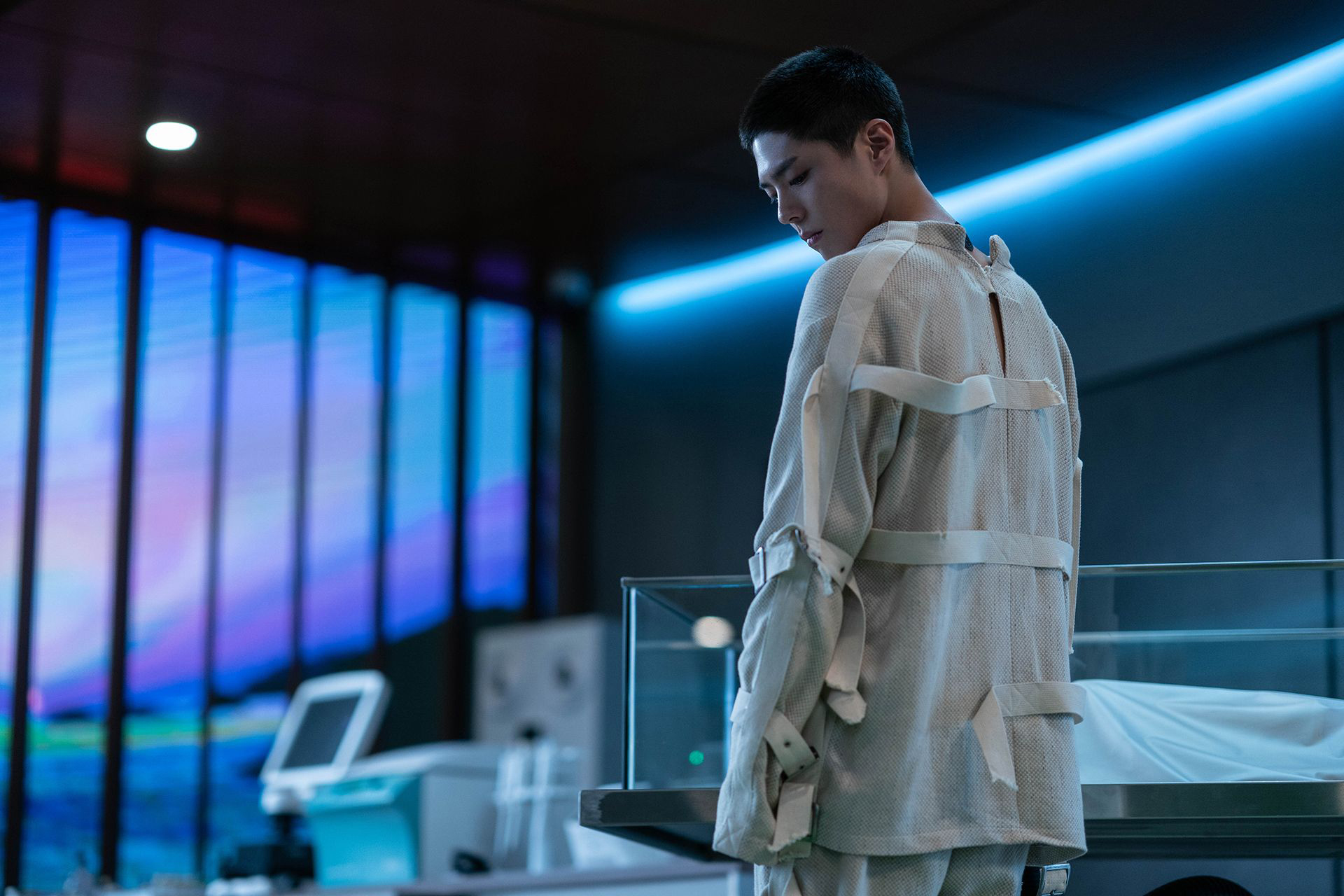 That’s an interesting idea, but I don’t think it pays off here. The character beats don’t quite work to hold the interest, meaning the Min-and-Seobok aspect drag. And their discussions of life feel like diversions from the real questions of power involved in the espionage-movie aspect. The themes of the film don’t emerge in the way they need to, or not all of them. Min and Seobok’s journey doesn’t dramatise the things the movie wants to say about life, and it feels hollow as a result.

(Here is as good a place as any to make a point I like to try to make every year in my Fantasia coverage: I’m an Anglo-Canadian looking at movies from cultural traditions quite distant from my own, and about which I have no particular knowledge. So there may well be elements I don’t catch. I think there’s still a benefit to my writing about them anyway — these are films that play in a North American festival, and are accessible to a North American audience, so a North American critic has as much business responding to them as anyone. But I may miss things, and I don’t always know what I don’t know. In this case, for example, the film makes a point of stating that the character of Seobok was named for a servant of China’s first Qin Emperor, a servant also known as Xu Fu, who was sent in search of immortality drugs and never returned from the quest. I would not have known that on my own and I don’t know how many other references I didn’t catch; or what kind of philosophical grounding the discussions about the meaning of life might have. As I say, I can only write about what I know, while nodding to my own fallibility and ignorance.) 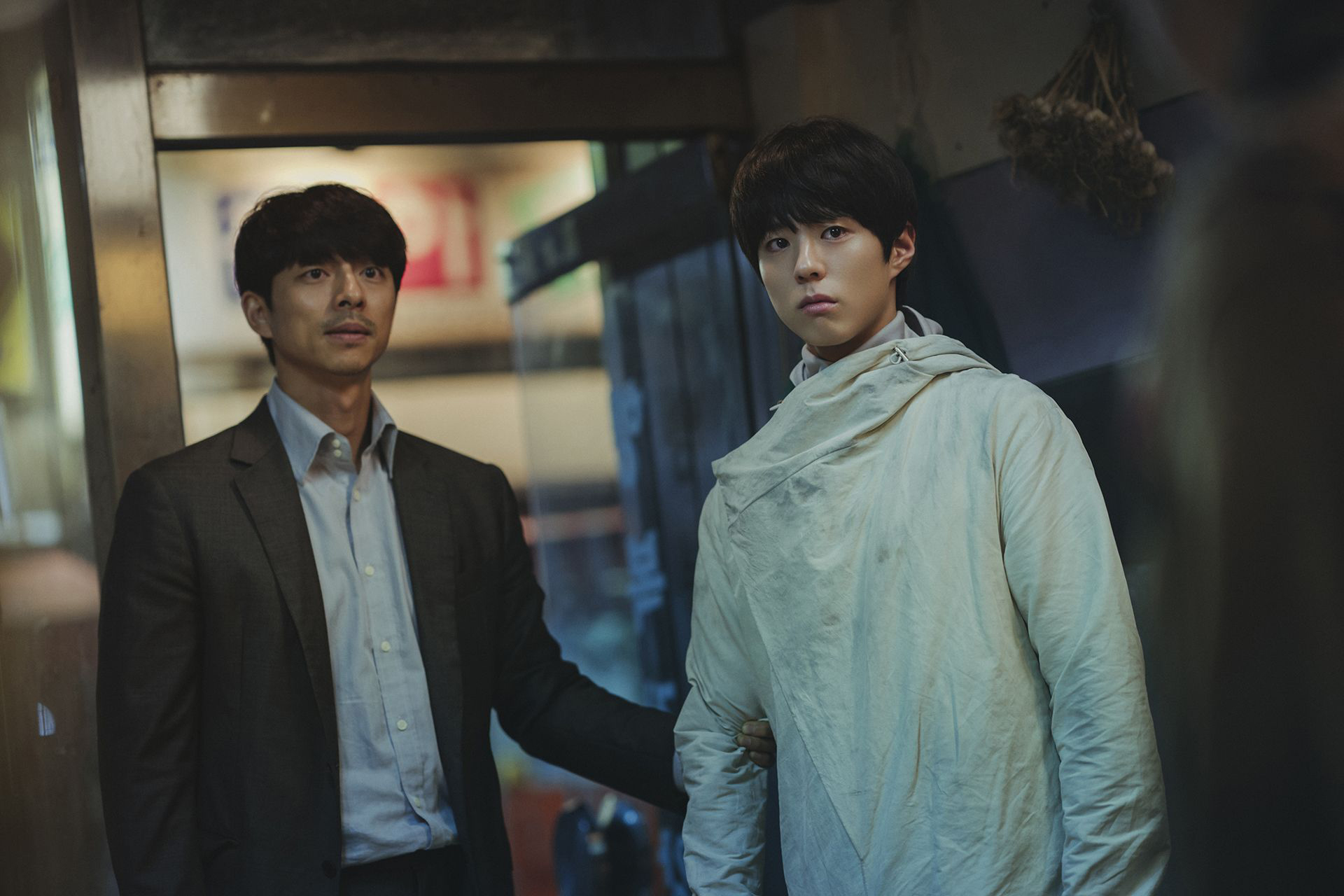 It may well be that the spy-thriller bits of Seobok come across the clearest because the movie’s better able to integrate its themes into the dramatic action. The betrayals and violence make a point about power; the maneuvering to control Seobok is explicitly positioned as an attempt to control medical care, to be in a position to dole out or withhold immortality. Had that been developed more, the film might have felt like more of a success.

As it is, you notice how familiar it seems, how much like other movies it is, ranging from, say, Starman to (perhaps especially) Akira. You notice how poorly defined Seobok’s abilities are, and wonder why he’s not taking a more active hand in events. And as the movie goes on explanations sometimes lead to more questions — Min recalls in flashback a betrayal that led to vicious actions on the part of his bosses, and you wonder why, since he knew these people, he didn’t anticipate their actions. And especially you wonder why he’s so trusting of his agency given this past. 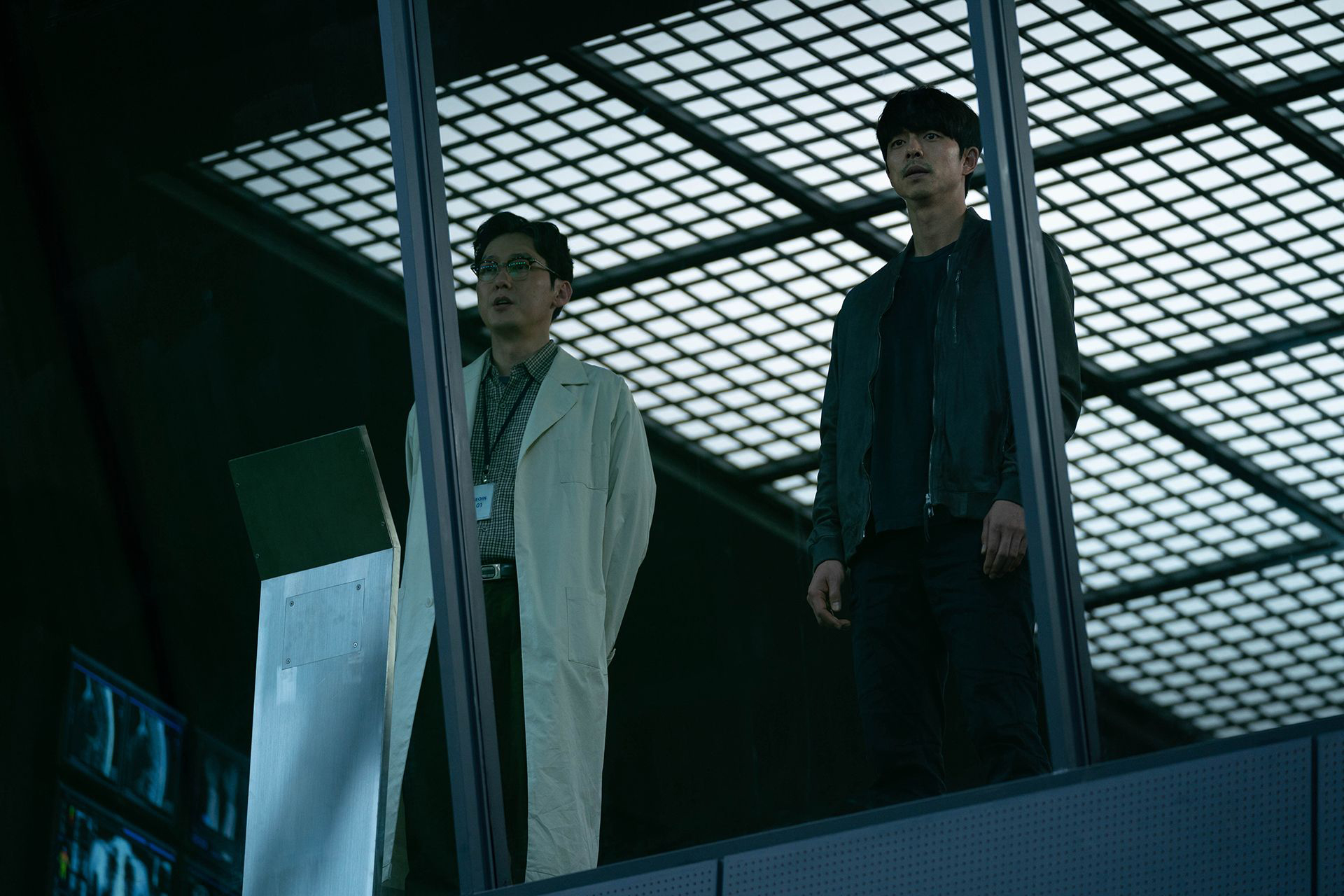 Maybe especially, you notice the lack of options for the characters. Seobok needs injections to live, and there’s one place he can get them, meaning the movie’s all about getting him there, and from fairly early on it’s pretty clear what kind of a reception he’s going to get when he arrives. You’re waiting for the characters to hurry up and get to the plot twist you know is coming.

There’s a good idea for a movie here. Seobok’s attempt to talk seriously about life extension is a good ambition. But the science-fiction element’s underplayed in favour of a very familiar story about a flawed man teaching someone not-quite-human what humanity means. That’s less original, and in this case less interesting. The action’s well-staged, and when Seobok does do something the effects are well-imagined. It might not have been possible to have more of those set-pieces on the budget the filmmakers had to work with. But they weren’t able to come up with an equally interesting equivalent. Seobok’s sporadically engaging, but simply never comes together.