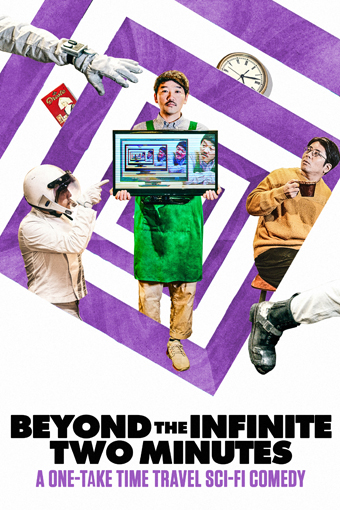 The 2021 Fantasia International Film Festival presented most of its hundred-plus feature films over the internet, some of them streaming at scheduled times, others available across the duration of the festival. (Which ended on the 25th; I ended up watching so many movies during the three weeks the festival ran I didn’t have time to write about them.) Looking at the schedule for August 5th, the first day, I didn’t see anything scheduled that I wanted to cover, and decided to watch some of the on-demand titles. Which raised the question of which film would be the best way to start my Fantasia 2021 experience. After some havering, I made my pick.

But before describing it, I’ll note that many of the features at Fantasia came bundled with a short film, and that was the case here. “Viewers:1” is a five-minute film written and directed by Daigo Hariya and Yosuke Kobayashi, starring Yuki Hashiguchi as the last man on Earth, desperately trying to present a smiling, optimistic take on the end of the world as he live-streams his wanderings. The world’s haunted by vast mechanical forms but deserted by humanity — and then comes a twist. It’s a well-made piece, carried by Hashiguchi’s ability to convey a sense of profound despair under a facade of crazed buoyancy. Strong special effects support the story and add to the menace.

Then the feature: Beyond the Infinite Two Minutes (ドロステのはてで僕ら, Droste no hate de bokura), a time-twisting one-take comedy from Japan. Kato (Kazunori Tosa) owns a café in Kyoto. He has an apartment above the café, and a crush on a young lady, Megumi (Aki Asakura), who works in the neighbouring barbershop. And one day after work he goes upstairs to find that there’s a delay between the computer monitor in his apartment and the screen it’s linked to downstairs — the café screen communicates to his monitor from two minutes in the future. The downbeat Kato is at first distinctly unimpressed, but his friends and his employee Aya (Riko Fujitani) are excited and start figuring out ways to take advantage of the two-minute glimpse of the future. Their future selves speak to them — but can they be trusted? And what happens if some actions have consequences that extend beyond two minutes? 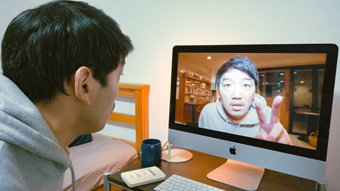 The seventy-minute film’s the product of a theatre troupe named Europe Kikaku. The troupe’s founder and director Makoto Ueda wrote the movie; Junta Yamaguchi, who has directed the troupe in various other projects, here helms his first feature film. Except for Asakura, the cast are all members of Europe Kikaku, and you can see how their familiarity with each other must have been a help in making this film. The whole thing takes place in a limited location, in one take (or several long takes stitched together into one take); the choreography’s complex, especially since the performances have to be timed to bits of video playing on one monitor or another. It all comes off, and it works because there’s no obvious sign of effort.

The acting is broad in a good way, with Kato’s world-weariness contrasting well with bubbly Aya and his awestruck overcaffeinated trio of friends. Character emerges over the course of the film, as problems mount up and twist follows twist. The story’s resolutely small-scale, which is good, and pleasurably convoluted use is made of the time-link idea. But in a deft final scene it all turns out to be in aid of character. 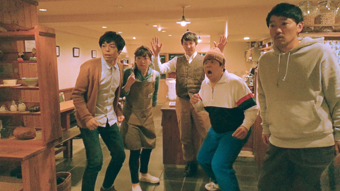 That said, if the character development gives the storyline purpose, and the storyline emerges from the twists that the time-link generates, those twists also have to work in and of themselves. And they do, starting slow and building in complexity as Two Minutes goes on. You never get bored, even as the movie is clearly ramping up — the two-minute delay lets all sorts of things be foreshadowed. And the film raises a question early on that becomes useful subtext: are our actions determined, or are we free to make the future as we want?

It’s a big question, but sits well with the joy of this film: the moment-to-moment exploration of the time-link, and the way events we see from one perspective naturally play out again from the other two minutes of screen time later. The one-take structure is useful here to emphasise the link of the two monitors; to demonstrate how past and present and future flow into each other. And also to get comic effect out of the switch in perspective.

Note that you never see the same character twice in the same place. The monitors show a character where they were or will be; so the character either has already played out that set of actions, or else will end up doing it in two minutes, depending on which screen they’re looking at. There’s no physical time travel, just a delay visible on screen — but it turns out you can play around with a screen in a lot of clever ways. 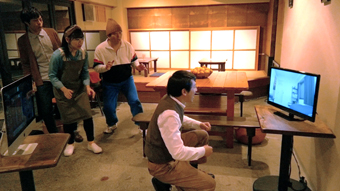 The comedy of the film is mostly gentle, and always a logical outgrowth of character and situation. If the characters are sometimes broad, they’re not cartoons. Secondary characters are well-judged to bring out elements of who Kato is by contrast, and then eventually when we see more of his crush Megumi we find she’s a rounded character as well. So there’s enough kinetic wackiness to keep things moving, but not enough to flatten the impact of the action.

Visually, the film’s effective beyond the single-take conceit. Different locations — the café, Kato’s apartment, a couple other places we see briefly — feel very different thanks to lighting and colour. The stairwell between café and apartment in particular becomes a weird shadow-zone, a nighttime exterior that feels like it hides mystery, a backdoor link of now and two minutes ago. 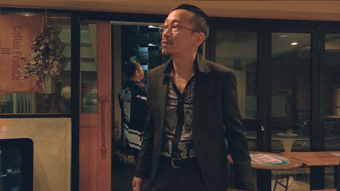 Certain developments toward the end of the film are an unexpected tonal change. Without wanting to give away too much, there’s an exploration of the premise which avoids flashy visuals in favour of stage-like drama. It’s coherent, but feels a little more forced than everything that’s come before. The modulation of tone here is a little surprising and I’m not sure it entirely works. In retrospect, it is set up by the quieter moments of the film as well as Kato’s overall attitude. But in the moment it was a distinct change in register that took me a moment to grasp.

It’s interesting to look at the movie and consider whether the story gains from being a film rather than a stage play. The one-take structure emphasises the stagelike continuity of action. So does the use of one location (albeit spread over several stories) and one group of characters. But the way place is used is cinematic, with the camera moving well and guiding our attention to what’s important. I suspect some of the character nuance would get lost on stage, where the broad comedy might overwhelm the character nuance and the themes that emerge by the end.

So in the end this is a very strong film, a comedy with intelligence and a deep sense of character. It’s structured well, though with a surprising complication toward the end. But it is funny and overall warm, a well-played and well-shot movie that deftly does what it wants to. It was a great way to start the festival.