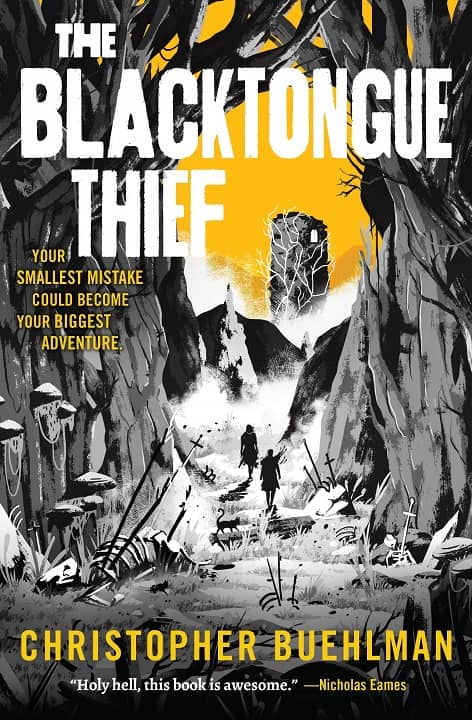 The Blacktongue Thief by Christopher Buehlman
(Tor Books, May 2021). Cover by Marie Bergeron

“Christophe the Insulter” was for years the single funniest performer at the Bristol Renaissance Faire in Wisconsin, with one of the best cons… er…. shows: Pay me to insult your friends in front of an audience. The more you pay, the more I roast them. It was dark, it was brutal, it was wickedly funny and everyone went away feeling good — even the victims.

Interestingly, that sums up the writing of Christophe’s real identity as horror (and now fantasy) writer Christopher Buehlman; a man whose growing canon of work is filled with some of the most disturbing and dark portrayals of classic horrors — vampires, werewolves, demons (and angels, who are pretty scary, too), and necromancers — but also moments of just brilliant, wicked humor and you always close the back cover deeply satisfied. Consequently, I was deeply excited to read his first foray into mainstream fantasy — The Blacktongue Thief.

I was a bit late to the party, the novel has already been garnering great reviews and lots of buzz; all of which is deeply deserved, all of which is a bit tricky to explain in a review that doesn’t give away too many spoilers. But in showing where it seems at once old-hat and then is not, I think I can show you what makes Buehlman so interesting a writer.

On the surface, the plot is pretty much straight out of 70s style sword & sorcery, overlaid on a more “high fantasy” world, that is decidedly a close parallel to our own medieval Europe. The fusion of sub-genres plays out in the character of Kinch Na Shannack, our thief and first person narrator. Kinch is a Galtian, which is a person from an occupies  former kingdom of a folk who claim to be descended from the long-lost (if they ever existed) elves: A people noted for their poetic gifts, tempestuous women, slightly pointed ears and blacktongues. (Yes, literally black, like human Newfoundland or Chow Chow dogs.) As a GenXer, the best and most endearing comparison I can make is that he is somewhere between Tasslehoff Burfoot and the Grey Mouser, in ability, motive and demeanor –with a dash of Zelazny-esque first person narration.

In the 80s, Kinch would have been a recurring character in the Thieves’ World anthologies, and if I give you a macro-summary of the tale, it reads like a TW tale writ large: a thief is assigned by his guild to accompany a female knight from the kingdom of Isperantia across continent to retrieve three magic items, but he soon realizes that the Takers’ Guild may not be entirely honest (go figure) about his real purpose, when he realizes the queen of distant realm is also the infanta of Isperantia, and a known enemy to the Guild.

As I said, the world itself is a thinly-painted “no guns, late medieval Europe”, just with the continent running in the opposite direction so that you have the Celtic lands (Galtia), England (Holt), and Spain (Isperanthia) in the east, Russia (Molrova) and the Balkans (Beltia) in the west.

The higher fantasy elements are present in the greater commonality of magic (there’s even a Magicer’s Guild) and the role non-human races. You seem the distant kingdom of Oustrim (think something like Viking Rus) has been overrun by giants — 12 to 15′ tall, bona fide giants. But more to the point, the world of men is in tatters after three bitter-fought wars against goblins, that ended in detente and a truce, but only after wiping out a generation of young men, nearly every horse in the lands of men, and leaving great instability politically and economically.

Now that you are looking at all the things that seem derivative, go back and read that last chapter, and you’ll find what makes Buehlman so great a storyteller, and where great world-building can take the familiar, add a tweak or two and lead you somewhere new.

First: This is a world without horses — but only freshly so — and thus when away from rivers or coastlines, trade and travel are agonizingly slow. Ships, caravans — they can command great prices and things from far away are now even more exotic and hard to come by. This plays perfectly into the Takers’ Guild, which Buehlman turns into a continent-spanning organization that is a crime empire of thieves, smugglers and assassins combined with an initiatic cult a bit reminiscent of Mithraism, complete with rank titles, secret-signs, vows, etc. This is the logical conclusion of every D&D Thieves’ Guild, and some of the humor — and horror — with which the author depicts the Guild (such as Kinch’s punishment tattoo, which I will not reveal the details of), feels like the machinations of a wicked DM’s home game.

Next, an entire generation of men has been drastically gutted by war.  There is a huge push for diversity in SFF, be that by ethnicity, gender or orientation, and in low-magic fantasy novels it often feels forced: It’s hard to believe in a bronze or iron age world wherein there is no separation of gender roles, nor is there any concern about one of the two driving focuses on pre-mechanical societies: found production and reproduction. Buehlman’s baked that solution into his world: Of course there are many, many female soldiers, sailors, etc., for the very simple reason that the majority of the male population between 22 and 50 are *dead.*

This being the case, of course there are openly queer relationships, especially between women — see above. The brilliance of this is that Buehlman now can work in these elements that modern readers want, and the contrast with what we know about how real iron age societies worked is part of the world building itself, and in direct service to the over-arching storyline.

All done without any long exposition or belabored discussion — you just learn the rules organically, and it all flows. The social contrasts with our own known medieval society are hard-built into a world dealing with a series of potentially apocalyptic wars with a foreign species that is truly not their own, and is so antithetical that the two race instinctually repulse each other.

And that brings me to the goblins.

When I had read the novel was set after the “Goblin Wars” I confess to feeling a sense of “really? *Goblins*? Gee, how original.” I was wrong.  These are no retread of Tolkien’s Orcs, but are creatures out of the depths of Germanic legend and nightmare: small, viscous, hive-dwellers, whose faces naturally seem to sneer or snarl, and who are so antithetical to the human way of life, they don’t even build using straight lines, as the order implicit in such disgusts them. (There is a scene called “the Pull,” which will stay with me as a vision from nightmares for a long while.)

Goblins and humans can’t be friends because nothing about the two species’ cultural values share a common ground; and *then* you add the inherit conflict over resources, sea lanes, etc, that nations of the same race might fight over and there’s just no road to true peace. Instead, there is détente — an uneasy truce because humans (“kynd”) and goblins are exhausted in resources and manpower. The humans live with the knowledge that the three previous wars have already cost them so much, and that goblins reproduce faster, it is unclear how they survive a fourth. And this is why the thought that an army of giants might now be pressing in from the northwest is so terrifying — it would be a potential war on too fronts and the kynd are far from ready or organized. 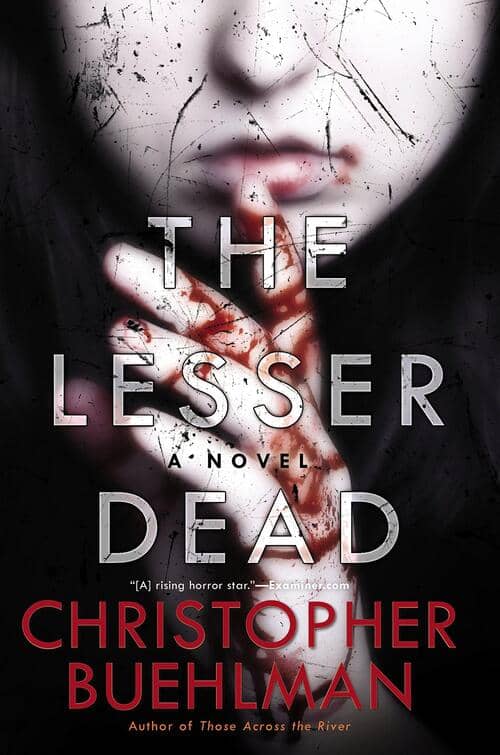 The magic of Buehlman’s world is also a fascinating fusion of D&D-style spellcraft, rather horrific magical flesh-crafting, tattoo magic and the strange, inexplicable magic of a Russian fairytale (I’d argue that Baba Yaga herself appears, spread across two… maybe three, depending on how one counts… characters), and it is interesting that without every belaboring how the different magic works the author provides just enough to see that there are many ways to work wonders in the world, and all have their costs. Some of the magic is funny, so of it is creepy, all of it is delightfully original.

Hopefully now I’ve shown you what makes this a delightful book, and is a trait, I think, of Christopher’s Buehlman’s work: He takes what is tired and makes you revisit it from a new perspective. I was struck by this when I read my first novel by him, The Lesser Dead, which took the first-person narrative style of Interview with the Vampire, even sets it in the same tired, and completely turns the Anne Rice style elegant, charming and beautiful immortal on its head, uniting her narrative style to the undead’s horrific, walking-corpse roots.

I’ve argued for awhile now that Dracula + Interview + Lesser Dead gives you the entire continuum of the vampire tale, especially through the lens of first person narration. While I don’t think The Blacktongue Thief pushes or reinvents the fantasy quest trope so thoroughly, it absolutely will delight, surprise and feel fresh. Although the tale is complete as is, it also leaves room to start off a series, and I am curious to see where the road leads next.

Gregory D. Mele has had a passion for sword & sorcery and historical fiction for most of his life. An early love of dinosaurs led him to dragons, and from dragons…well, the rest should be obvious. From Robin Hood to Conan, Elric to Aragorn, Captain Blood to King Arthur, if there were swords being swung, he was probably reading it.

Since the late 90s, his passion has been the reconstruction and preservation of armizare, a martial art developed over 600 years ago by the famed Italian master-at-arms Fiore dei Liberi, including the use of the two-handed sword, spear, dagger, wrestling, poleaxe and armored combat. In the ensuing twenty years, he has become an internationally known teacher, researcher, and author on the subject, via his work with the Chicago Swordplay Guild, which he founded in 1999.