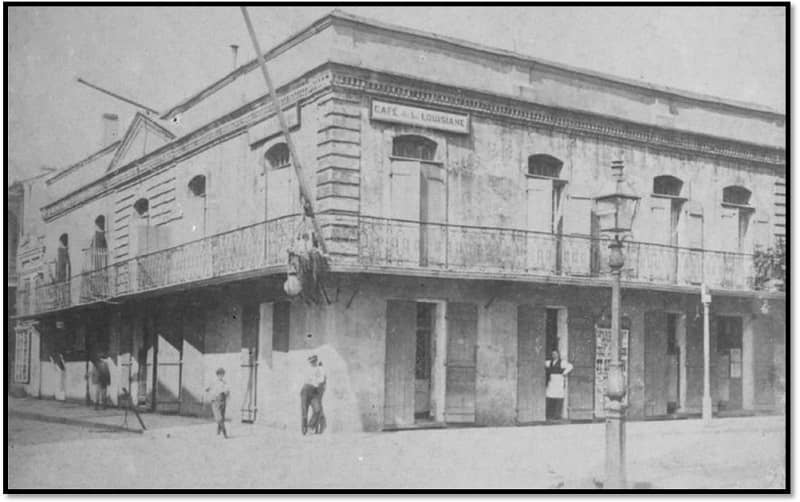 Building which now houses Le Petite, in the early 1900s

When someone finds out that writing for Black Gate is my side hustle, you can be sure that in 3 minutes or less I’ll get asked if I’ve ever seen a ghost. I can say with all conviction, that I have certainly tried harder than the average person. I have attended 38 “ghost hunts” in 11 countries, accompanying paranormal investigators with credentials of varying legitimacy. I have sat up all night, surrounded by EVP recorders, EMP detectors, spirit boxes, full spectrum POV cameras and EDI meters. I’ve done this in places like the catacombs under the streets of Edenborough, Scotland, in the burial chambers beneath St. Martin-in-the-Fields church in London, Waldfriedhof Cemetery in Munich, Germany and the battlefield of Gettysburg. I consider myself an open-minded skeptic who would love to believe that spirits walk among us, or at least that the shadowy imprints of past events are occasionally visible. However, the most consistent thing I captured on the numerous outings to these damp, chilly places, was a cold.

Needless to say, the people who ask about my ghost adventures are disappointed. “You’ve never seen anything?” they ask, “Like an-nee-thing?”

And the answer to that question is no.

Because there was one time that I literally saw something. And in the years since, I occasionally pondered that night trying again and again to come up with a logical explanation to it.

So, here’s what happened.

In 2008 I accepted an invitation to join the Southern branch of the Society of Paranormal Investigators on a trip to several sights in New Orleans. The Society is defunct now, but at the time they were one of a few legitimate paranormal groups made up mainly of college professors, theologians and engineers. I was introduced to them by Chicago’s very own high-profile ghost hunter, Richard Crowe, with whom I had traveled to Gettysburg a few years previous. The excursion to NOLA was a three-day affair, focusing on a different sight each night; Lafayette Cemetery number 2, a Creole building on Ursulines Ave which, at the time, was offices, and Le Petit Théâtre Du Vieux Carré. Le Petite was our first stop on Friday night. 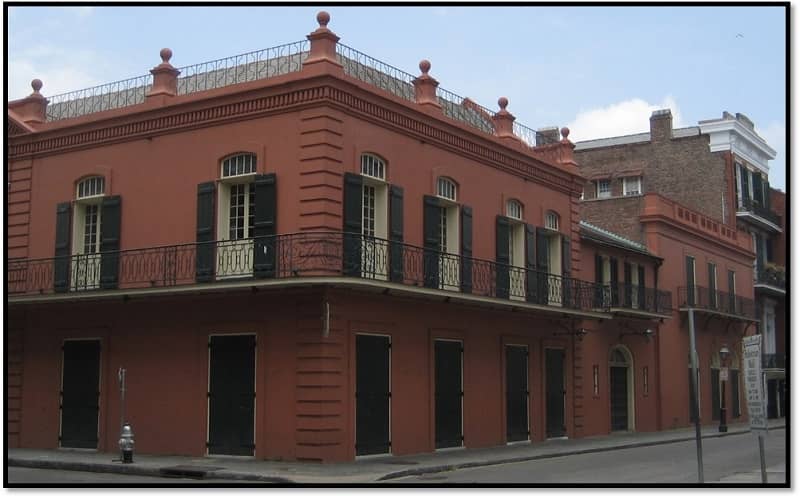 The building at 616 St Peter Street had been many things since it was built in 1797, until “The Drawing Room Players” moved in to make it a theater in 1922. Occupants included a restaurant/bar and offices for a local port company. During the Civil War, Union General, Benjamin Butler, used it as Army barracks. It is also considered one of the most haunted buildings in the French Quarter, in part due to the plague which raged through NOLA off and on until 1925. The city literally rose from a swamp and much of it sits below sea level. As an important port, travelers from around the world were always coming and going, and these conditions coupled with mosquitoes and the general lack of sanitation meant the plague was a frequent visitor to NOLA. At several times during this period, 616 St Peter was commandeered by the city to be a hospital for quarantining and treating children. Though the theater company who now occupies the space will tell you stories about an actress, a former theater manager and a nun among others, who often cause havoc in the theater, the ghosts of the children who died of plague in the building were apparently responsible for the most mischief.

The Society and I had plans to spend the night in the theater and attempt to capture these spirits on the plethora of electronics wheeled in on media carts. It was late May and the daytime temperature was blisteringly hot and humid. I had changed clothes twice while attempting to do a bit of sightseeing prior to meeting the eight members of the Society in the lobby of the theater at 10 pm. I arrived that evening wearing a long gauzy sun dress I had picked up at a local shop, which was lighter and more breathable than anything I had packed.

What I was wearing is important, you’ll see.

As we gathered at Le Petite, the 8 pm production was just wrapping up. The theater manager asked us to be very quiet and remain in the lobby until the show let out. The leader of the outing gathered us into a tight circle and asked each participant to introduce themselves and their specialty to me. In whispers, I learned we had two electrical engineers, four investigators, a professor of theology (the leader) and, of course, a psychic. In very low tones, the leader explained the strategy for the evening and where we would be setting up the equipment. We had previously been sent a file detailing the various ghosts which had been seen in the building, and where.

I was leaning in as close to the group as possible, so I could hear what was being whispered over the din of the industrial-sized air conditioner. I was also now freezing in my flimsy dress and sandals, and wishing I’d brought something to cover my shoulders, when the psychic interrupted the leader, reaching out to touch my arm. She whispered “Do you have children?” Being a parent has never been part of my idiom, and I told her “No.” 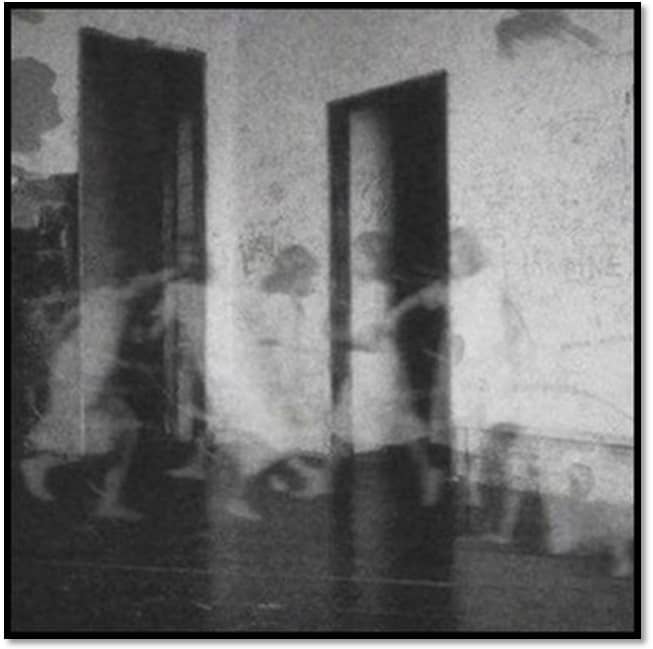 “Well, the children are gathering behind you. They seem drawn to you. Give me your hand.” Without waiting for a reply, the psychic took my hand and turned me to face outside the circle. She extended my hand to the empty space behind me. In spite of the fact I was already cold, my hand felt like it had been plunged into icy water and I snatched it back. All of our impressive ghost-detecting equipment was still packed in numerous cases, which I thought was convenient at the time. No way to confirm anything, even if you believed these gadgets detected spirits. Plus, that industrial air conditioner was pumping out cold air everywhere, so the fact that there was a cold spot? Meh. The skepticism clearly showed on my face which didn’t seem to bother anyone. That was my role in this venture after all – hopeful skeptic. I turned back to face the inside of our tight little circle while the discussion moved to placing equipment in the lobby, which we had not previously planned to do.

And then this happened.

The psychic was now standing on my right, and all of our faces were turned toward the floor as we strained to hear the leader. The psychic slowly leaned in and whispered, “Look at your skirt.” When I shifted my gaze further down, the hem of my gauzy skirt was rising up at a point, exactly as if the edge of the fabric was pinched between tiny fingers. It pulled out and up until the opposite hem pressed against my legs and the skirt now formed a perfect triangle, pulled away and suspended about two feet off the floor. And it hung there, unmoving. The psychic had a huge smile on her face, “They really like you. They’re just playing.” The rest of the group stared in open-mouthed shock. 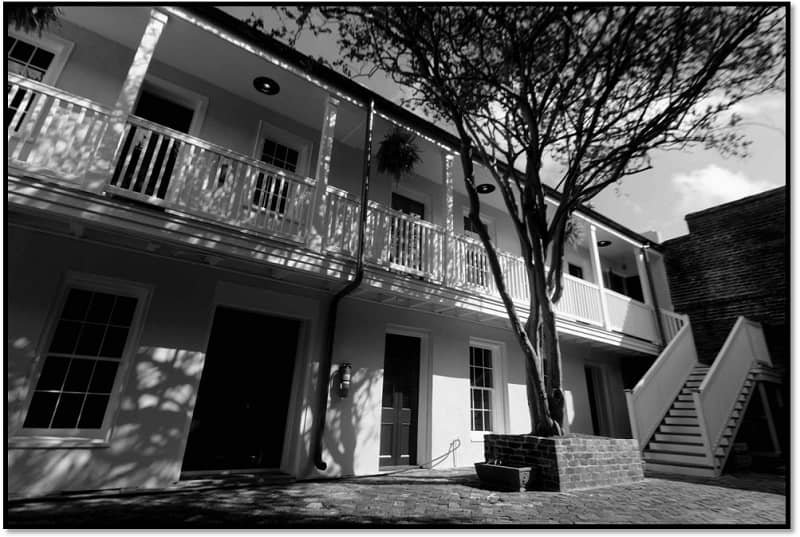 The office building which is now “The Haunted Hotel”

Very slowly I reached out and took the outstretched fabric in my fist and pulled. For a millisecond whatever had hold of hem, held it fast before letting it go. I stood there gripping my skirt in my fist for another few seconds before the stunned silence was broken by the theater doors opening, as that night’s crowd spilled into the lobby. My colleagues were excited by the event and immediately began setting up as soon as the last patron exited onto the street. I got out of the way by sitting in the gallery while my conflicted brain tried to make sense of what happened. Did a vent breeze blow my skirt up like that? Unlikely. I was wearing sandals and didn’t feel anything, plus the fabric was pulled straight out, now billowing in a breeze. Did one of my colleagues rig up this event? The lobby was dimly lit. Did someone use a wire to pull the fabric? Possibly, but why?

Did a group of mischievous ghost children pull my dress?

The rest of that night, as well as the subsequent two evening passed without incident. A couple of the pieces of equipment blipped in the theater, but the engineers noted that the age of the building coupled with the retro-fitting of electricity was likely the cause.

As for what I saw, I had no explanation then, and still don’t. I remain a (bit more) hopeful skeptic. 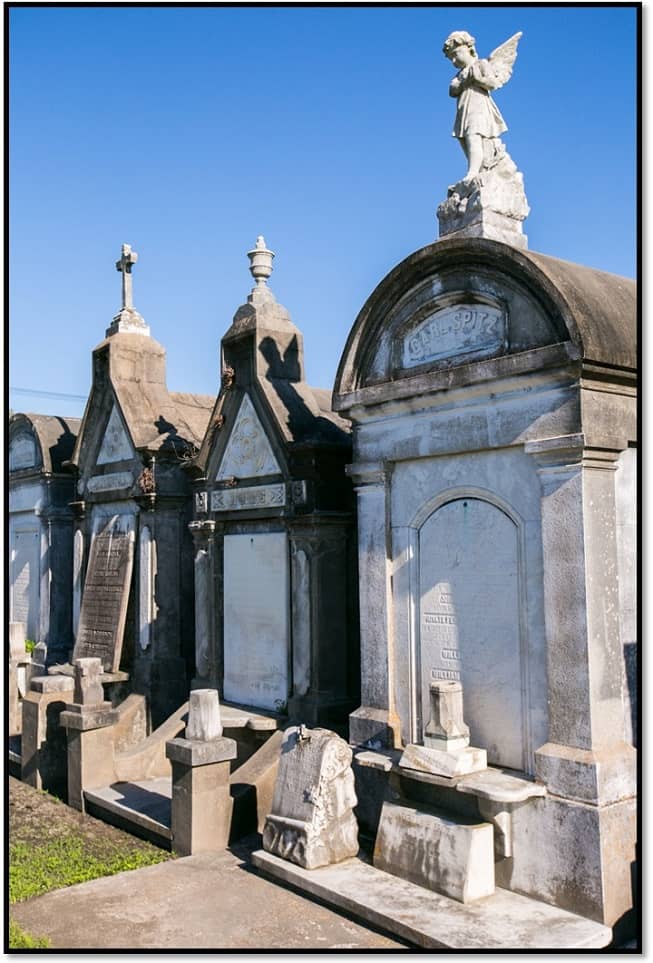 You can visit Le Petite in NOLA’s French Quarter, by seeing a show or just dropping in. The office building we visited at 623 Ursulines Avenue, is now called (literally) The Haunted Hotel, whose web site states, “Home of many murders dating back hundreds of years, few guests leave the Hotel without seeing a ghost. Many can’t stomach staying an entire night.” And of course, NOLA is famous for its cemeteries, many of which you can visit. Unfortunately, the stunning Lafayette Cemetery number 2 is no longer one of them, unless you have family interred there.

Delicious. One of my favorite threads in my writers group’s forum is only active for a week or two before Halloween. In it we share our personal “mostly” stories. This would have fit right in.

That sounds fabulous, feel free to cut and paste…

My ghost seeking experiences have been much the same, meaning next to nothing but with a few what-the-hell moments here and there. I’ve run across and seen a few things that could be explained away, but the logical explanations seemed farfetched. I, too, remain a hopeful skeptic.

May we both continue to enjoy the hunt…