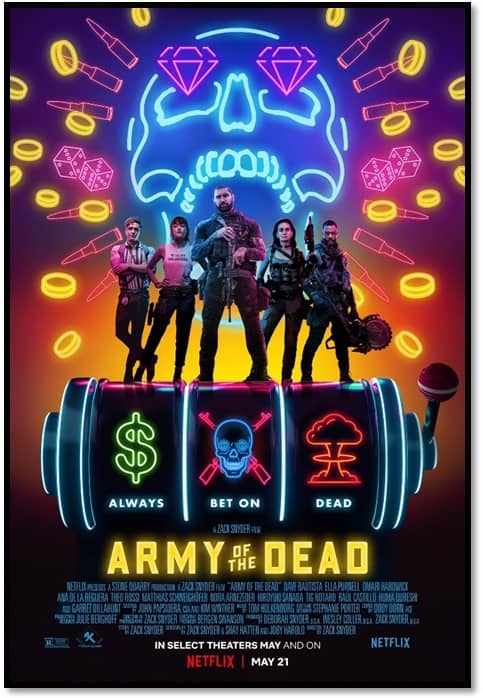 With regards to movies, my mantra has always been that if you tell me a good story, I’ll willingly suspend my disbelief. I’m not one to pick apart details or demand every plot hole be plugged if, overall, the story is entertaining. For example, I thoroughly enjoyed Wonder Woman 1984, even though critics were all over it for a number of plot-related reasons. However, even I have my limits, such as Godzilla vs. Kong. Since when is King Kong as big as the buildings he used to scale? That said, I was ready to go all in for Army of the Dead, especially as I really love a good zombie movie. I probably did have a bit of lingering doubt as I did not rush out to see this one during its theaters-only first week of release. Instead, I avoided all reviews and spoilers until I could watch it on Netflix where it debuted on May 14th.

The verdict? A firm split decision. 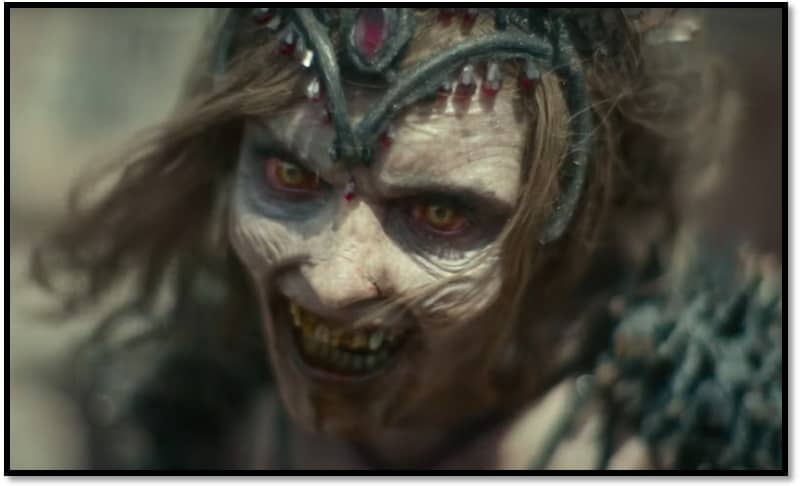 (This section is spoiler free)

On the one hand, the premise is pretty solid. The government is transporting zombies across the Nevada desert for some reason. That part didn’t bother me one bit, as I’ve always suspected the government has them anyway. Due to an accident, which happens right outside Las Vegas, the zombies get loose. And as they have some human left in their decaying brains, they head straight for the bright lights of the strip.

Fast forward some amount of time and Las Vegas has been walled off with stacks upon stacks of shipping containers (still plausible). Uninfected humans are camped around the outside and are being evacuated prior to the entire city being nuked. Vegas is now wall to wall zombies. But wait – what about all the oodles of cash in the casino vaults? Seems a shame to let all that money get incinerated along with the walking dead, right? 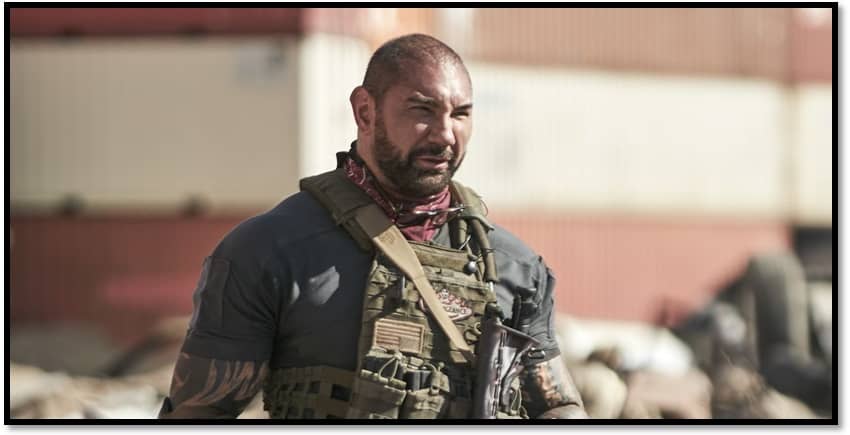 Enter military veteran Scott Ward in the form of Dave Bautista (Guardians of the Galaxy). A smarmy millionaire lures him from his job flipping burgers, to wade through the zombies and extract all the dough from the strip’s largest casino before it all goes up in a mushroom cloud. The smarmy guy tells Bautista he’ll get all the equipment he needs to do the job and a percentage of the take. All Bautista needs to do is pull a team together to safely get in and out again.

I mean come on. That sounds like fun doesn’t it? I mean, it’s a tad predictable but still fun.

And it is, mostly. 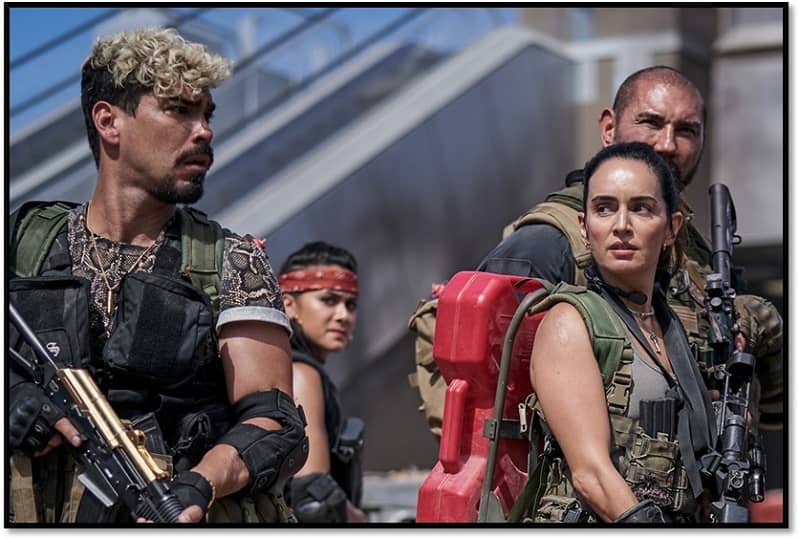 On the plus side, writer and director Zach Snyder (300, Watchman) does a good job with the zombies. Not only do they look good, but he’s got a unique take on them. The zombies in Army of the Dead are in two groups. The “shamblers” are your traditional, mindless brain eaters. But there is also an elite class of undead who apparently retain the most primal of brain function. They are organized alpha predators led by a male and female super-alpha, and these are the really dangerous zombies Bautista and his team need to navigate.

Snyder’s apocalyptic Vegas is well done, run through with moments of humor in the form of a zombie Elvis impersonator and a zombie white tiger. There is a lot of shooting and zombie heads exploding. If, like me, you’re a fan of the movie Aliens, you’ll see quite a lot of plot and character parallels but I honestly didn’t mind that either. Though the action comes to a screeching halt more times than I would prefer, there are kick-ass female characters, fun dialog and enough tension to keep me entertained for the run time of 2 hours, 28 minutes. 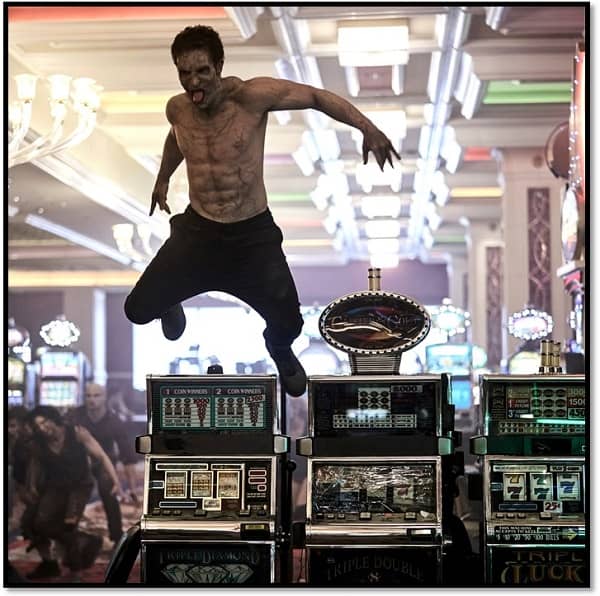 On the negative side, Army of the Dead too often felt like a longer movie that had been badly cut. A lot of things pop up along the way that feel like non sequiturs. For instance, why is Bautista’s character, a decorated military veteran, doomed to a life flipping burgers? As we’re clearly supposed to like him, why is he not only planning to stiff the guy funding the operation (smarmy though he may be) but also his team/friends? Listen carefully and you’ll hear him offer each team member a dwindling cut of the millions until the helicopter pilot accepts this potential suicide mission for something like two grand.

And speaking of the team, you can pretty much guess who lives and who dies the minute you meet them, as they are basically action movie tropes. There is also all the flat-out gratuitous stuff like topless zombie showgirls chowing down on gamblers, and for heaven-knows-what-reason, the idea of zombie sex that produces a zombie fetus which leads to a zombie C-section.

And speaking of gratuitous, don’t get me started about the last five minutes of the film. Snyder pretty much breaks all the zombie rules he just spent two hours setting up, in a segment that looks like it was bolted on at the last minute when Snyder got a whiff of interest in a sequel. Had Army of the Dead ended at what looked like the end, I would have liked it better. Instead, when the credits rolled, I was left with that “second ending” as my final impression, which wasn’t a great one.

So, if you already have Netflix and you like zombies, go ahead and watch Army of the Dead. It’s entertaining if you don’t look at it too closely. If you don’t, this isn’t the reason to subscribe.

I’ve sat down twice to watch Army of the Dead (confessing first of all that I deeply dislike previous Zack Snyder movies, Watchmen being the sole exception), and both times I’ve stopped at the end of the opening sequence. Once you have topless zombie showgirls devouring hapless Vegas high rollers, where is there to go? I’m sure I’m doomed to eventually watch the whole thing, but I know that by the time the final credits roll, I’ll feel Sucker Punched.