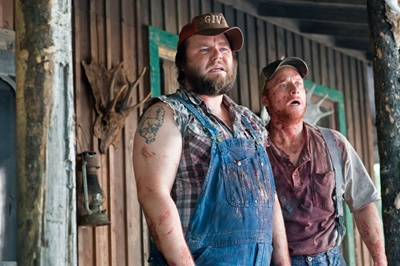 Today I’m trying to fit in with the cool kids. I usually have to sit by myself at the Mystery table. But this week, I pull my booster seat up to the Horror table. I love a good homage movie that is also funny. Something that’s more pastiche, than lowbrow parody. The best example I can think of is Galaxy Quest. It pokes fun at the science fiction mores and tropes, largely established by the original Star Trek television series. And it does it by delving deeply into the cult fandom which that show inspired. It has a tremendous cast and is lovingly hilarious. It’s clever funny; The British Office. Not dumb funny; Dumb and Dumber (which I find utterly stupid and unwatchable).

In the mystery field, it’s Without a Clue, which turns the Holmes story on its head. Ben Kingsley is the genius, crime-solving Doctor Watson, who hires the unemployed, drunkard actor, Reginald Kincaid, to play Holmes for public consumption. Watson feeds Holmes clues, solutions, lines, the works; and Michael Caine is utterly fantastic as the front man, the great Sherlock Holmes. It’s brilliant and hilarious. One of my five favorite Holmes movies.

Some would point to Army of Darkness as this type of movie in the horror field. It’s Bruce Campbell’s Evil Dead Light. I get it (and The Adventures of Brisco County Jr. is my all time second-favorite TV show). For me, Tucker and Dale vs. EVIL is right there with Galaxy Quest, and Without a Clue.

This movie has all the pieces; a road  encounter with hillbillies; college kids in the woods; chainsaws and wood chippers; skinny-dipping coeds; a massacre at the same place twenty years before; bodies piling up one at a time: it’s all there. But it’s all turned upside down!

SPOILER ALERT – This movie came out in 2010, and it’s free on Amazon Prime. You can go stream it and come back. Work with me here. END SPOILER ALERT.

Tucker is played by Alan Tudyk, who does voice-acting all over the place. Go look at his IMDB entry. Man! He was Steve the Pirate in Dodgeball, and had a tremendous one-episode guest appearance on Justified (my all-time favorite TV show). Tudyk is buddies with Nathan Fillion from their Firefly days, and they pop up together, such as the recent web series, Con Man (Tudyk’s character says his Justified gig was supposed to be five episodes, but they killed him in the first one. He moans that Hollywood loves killing him. It’s a fun series).

His buddy Dale is played by Tyler Labine, who is really the star of the movie. He’s a big guy, shy, with confidence issues. He and Tucker are off to their dream vacation house in the woods, which is exactly the creepy, abandoned cabin you would expect it to be. And they love it! I’ve not seen him in anything else, myself. He was in season two of the abysmal, festering pile of crap that was the recent Dirk Gently series (Superb book, total crap show. Max Landis should be banned from the industry).

The stunning Katrina Bowden (Cerie on 30 Rock) is Allie, who Dale immediately develops a crush on. He and Dale rescue her when she gets knocked out (skinny dipping, of course). The rest of the movie revolves around her friends thinking that the guys kidnapped her and their attempts to rescue her. 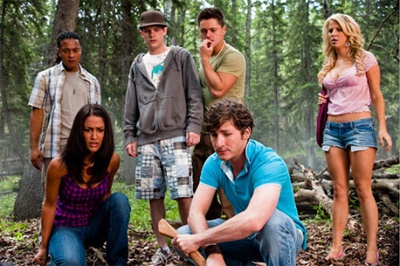 This was a Canadian production, with a lot of Canadian actors. Jesse Moss, leader of the college kids, is all over Hallmark movies. I recognize about a dozen of his Hallmark credits, and he’s a regular in Holly Robinson Peete’s Morning Show Mysteries. He isn’t quite so nice in this one.

Tucker and Dale are just out doing some night fishing – and drinking – when things get a bit haywire. They are flabbergasted at these crazy kids, who suffer one fatal mishap after another. Through no fault of their own, the boys find themselves in a constantly devolving, impossible situation:

Tucker: All right… I know what this is.

Tucker: This is a suicide pact.

Tucker: These kids are coming out here, and killing themselves all over the woods.

Dale: My God, that makes so much sense.

It just keeps getting more preposterous for them, all the way to the finish. I laughed out loud at some parts. This movie mixes traditional horror, and humor.

This is definitely worth watching. I’m not a horror fan – I’m not even crazy about Robert E. Howard’s horror stuff, and he’s my second-favorite author. But I’ve seen enough genre films to appreciate how Tucker and Dale takes them on. It’s an excellent film. It is a little gory here and there, so be warned. Tudyk and Labine said that  second script, from a different, unidentified screenwriter, was terrible. That seems to be as far as a sequel is likely to get.

Tucker and Dale vs. EVIL is worthy to join Galaxy Quest, and Without A Clue, in this category for me. Support Your Local Sheriff (which I love) might be one in the Western genre, but I’m not sure yet. Of course, there’s the amazing Blazing Saddles, but that’s so over the top, it’s in a league of its own.

Here’s the trailer (that pic is from the scene where it all goes haywire):

He organized Black Gate’s ‘Discovering Robert E. Howard’ and ‘Hither Came Conan’ series’. Both were nominated for awards from the Robert E. Foundation.

Horror comedy is a tricky genre. I never much liked An American Werewolf in London, which everyone else seems to love. My favorite is Polanski’s The Fearless Vampire Killers, but I try not to think about who directed it and who starred in it (Sharon Tate). No opinion on Shaun of the Dead? I like that better than Tucker and Dale (which I did enjoy) or Zombieland.

And you’re on the mark with Support your Local Sheriff. I can’t think of a better western comedy. McLintock, maybe?

I know who Simon Pegg is, but I haven’t watched any of his movies.

Shaun of the Dead is absolutely amazing – a good zombie movie and surprisingly sweet. I just rewatched Tucker and Dale and was very happy how well it held up

man i realaly love a good parody. i fell in love with Leslie Nielsen and all the parodies he has done. whn i was in my late teens to 20’s i hung out in a mom and pop movie rental place, and one week i was made to watch all the Western Trinity mocies, which were basically naked gun like westerns from around 1970 or so. i gotta say i do not like westerns in general but i did crack up at the Trinity movies, i dont remember how many there are, but i know one was called My Name is Still Trinity. have you seen those?

as far as Tucker and Dale, i enjoyed that, but i watched it as already a fan of Mr. Tudyk, i am not a huge horror fan either, though i feel like for some reason i have seen a ton of them. i dont think i ever seek them out though. things like What We Do In The Shadows still get me though. that one is funny and follows through to the TV show they made. hell Leslie Nielsen even made of few of those too.

silentdante – Haven’t seen those Trinity films. Somebody spoofing the Spaghetti Westerns is an awesome idea!

Have you watched Con Man? Tudyk really gets to have fun in that one.

con man was good, little on the nose, but it was a fun watch.

i am REALLY liking him in Resident Alien though, great role.

I enjoyed TDvE, but I thought it fell a little short of its trailer.

Worked for me. But I don’t watch even one horror movie a year. So, it hit a spot I rarely visit. If it wasn’t for Robert R. McCammon, I don’t think I could say I was a horror fan at all (though F. Paul Wilson’s Repairman Jack has elements of it).

This has been on my radar for a while because it’s such a great concept. I didn’t want to comment before watching it first, in the hopes that it might be on Amazon Prime over here in Ireland. Sadly, it’s not. Still on my list, though!

Textbook example of why communication is key.