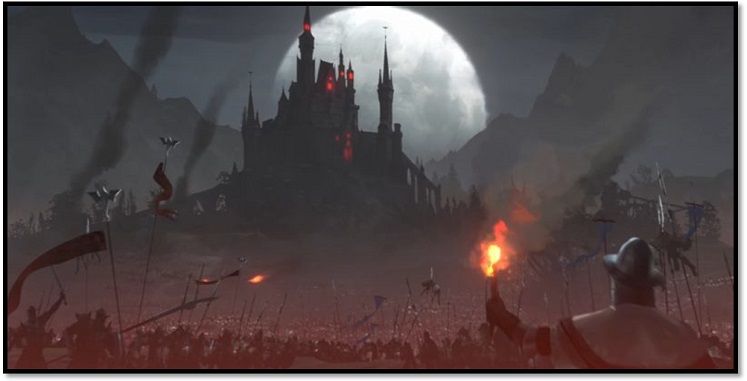 As you know, I’ve been beyond irritated at the trend of changing vampires from life-sucking creatures of the night, into angsty, emotionally tortured emo kids. It started with the Twilight book series of course, which then became excruciating films. But it didn’t stop there. Instead, we were treated to Twilight spawn such as The Vampire Diaries, The Vampire Academy and Fallen, to name but a very few. Vampires lost interest in Victorian costuming, or even leather-clad rock star chic, and instead started looking like L.L Bean models. They agonized over their attachments to their food source rather than eating with erotic abandon like the blood-thirsty creatures of the night that they were.

They went to high school.

So, this week’s news could not have come at a better time.

Thanks to Stunlock Studios, we can all finally put this right by becoming the undead bad-asses they were meant to be. The talent behind Battlerite have just announced a new role-playing game entitled V Rising, which allows players to be vampires out to build an empire.

Johan Ilves from Stunlock explains the inspiration for V Rising came from “everything from classic gothic horror literature to Netflix’s Castlevania. We want to give players the full vampire experience of avoiding the burning sunlight, hunting for blood and building their castle. All this while competing against other players and being tracked by vampire hunters.”

Gameplay will start you out as your average, run-of-the-mill vampire, hunting for blood to gain strength. From there, you’ll be able to build and customize your castle (as opposed to a house in a Seattle suburb), invite friends to join your clan, and convert humans to vampires to grow your empire (yes, humans will be food instead of dating opportunities). You’ll also be engaging in real-time combat and compete for world domination with player-vs-player and player-vs-everyone challenges.

I love it when games have teaser trailers. Check it.

We expect a beta version of V Rising to materialize later this year and you can sign up for notifications here, as well as wish-listing it on Steam.

I’ve got my puffy shirt and fake teeth all ready…

I remember reading les Daniels – No Blood Spilled was my favourite.

Mr. Byrne, as expected, you have excellent taste in vampires.

Thank you for the notice of this game. Like you, I was bothered by the attempt to “humanize” vampires, for lack of a better term. Undead creatures are unpleasant and dark, and it’s good to know that this game’s developers get that.

Dan, where have you been all this time? You are VERY welcome here.

The Vampire Diaries books came out in the early 1990s, more than 10 years before the first Twilight book. Only the TV show can be called a “spawn” of Twilight — because the TV series probably wouldn’t have been made without the popularity of Twilight.

It’s also become fashionable to hate emo young adult vampires. But I’d love to see what a wider range of authors could do with that same concept. Why can’t an emo teen-aged vampire be as scary as Christopher Lee with red contacts? But I vote for emo teen-aged vampires dressed in Victorian garb.

I like seeing a wide variety of vampire portrayals, from Barnabas Collins (sometimes sympathetic, sometimes a predator) to Prince Mamuwalde (sympathetic but with a very high body count) to more predatory vampires.

Yes – Vampires the way they were meant to be: Bloodthirsty predators feeding on human cattle!