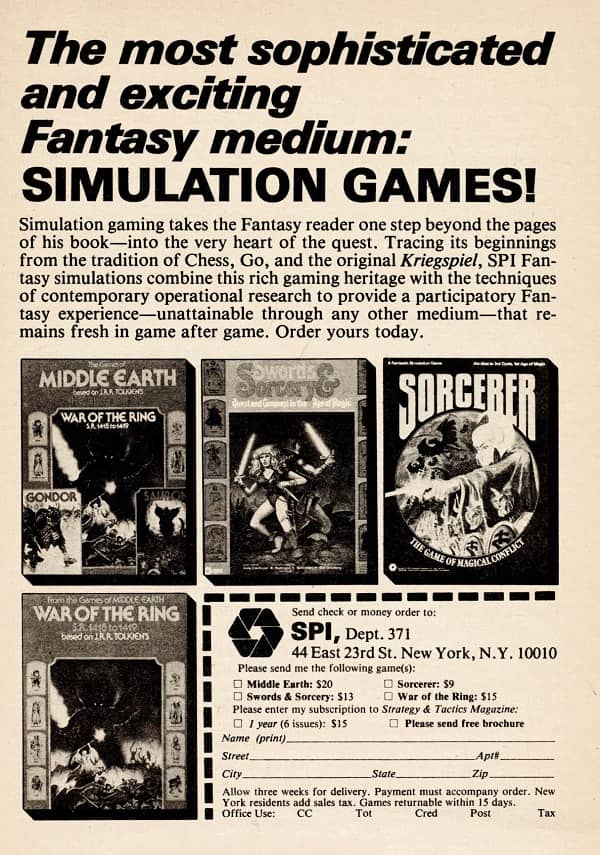 SPI ad in The Magazine of Fantasy & Science Fiction, November 1978

I’ve been spending some time over the past few months getting my SF digests back in order. While those on the shelves were in order, I had bunches in boxes that needed to be incorporated, so it’s been a bit of work. But it’s been fun to look at them as I’m organizing them (which of course just slows that process down!)

I’d remembered that the first SF digest I subscribed to was The Magazine of Fantasy and Science Fiction, but had forgotten that the first issue of my subscription was December 1976. My copy still has that helpful mailing labeled plastered over it. But on that copy at least, from the perspective of 45 years later, I don’t mind it being on there at all.

I’ve had great fun looking again at the various SF and fantasy gaming ads that were running in digests during that period. I think that the first game I ever ordered was TSR’s Lankhmar in early 1977 (being a Fafhrd and the Gray Mouser fan, I couldn’t resist!), while I was in eighth grade, followed later that summer by SPI’s Sorcerer and Metagaming’s Ogre. Once I’d ordered a few things, my name found its way on to many mailing lists, so I wasn’t limited anymore to what I saw advertised in the digests. 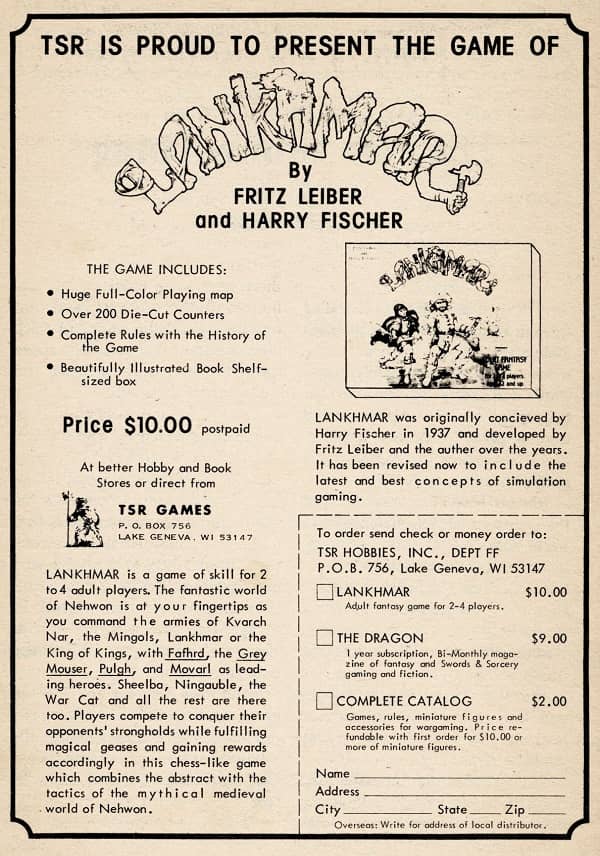 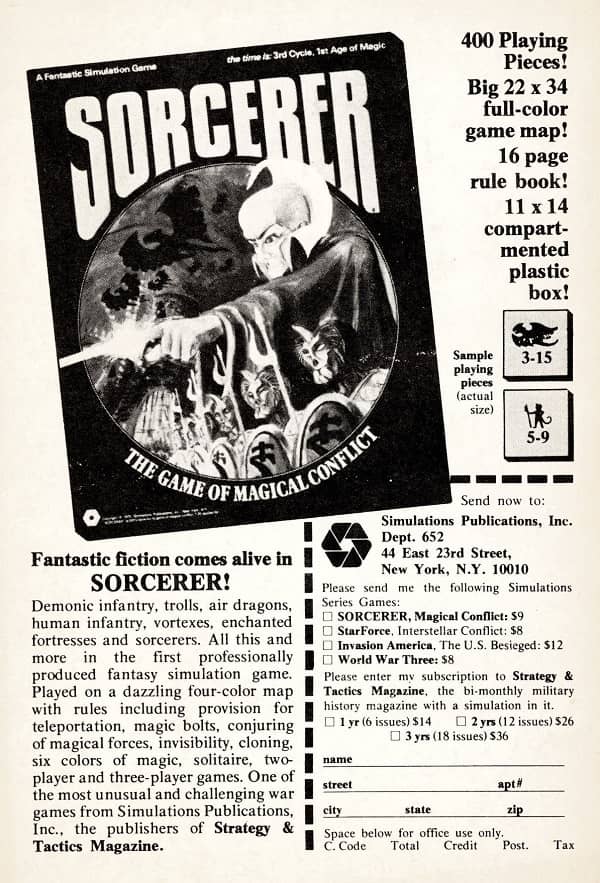 Once ninth grade hit, my friends and I played Steve Jackson’s Melee every chance we could get, as well as Wizard once it came out. Metagaming’s The Space Gamer was the first gaming magazine I subscribed to, but it certainly wasn’t the last! 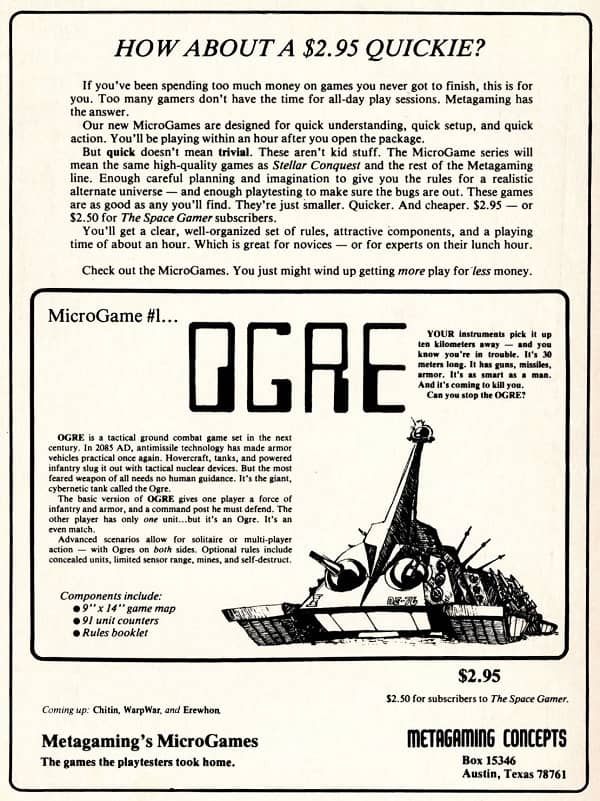 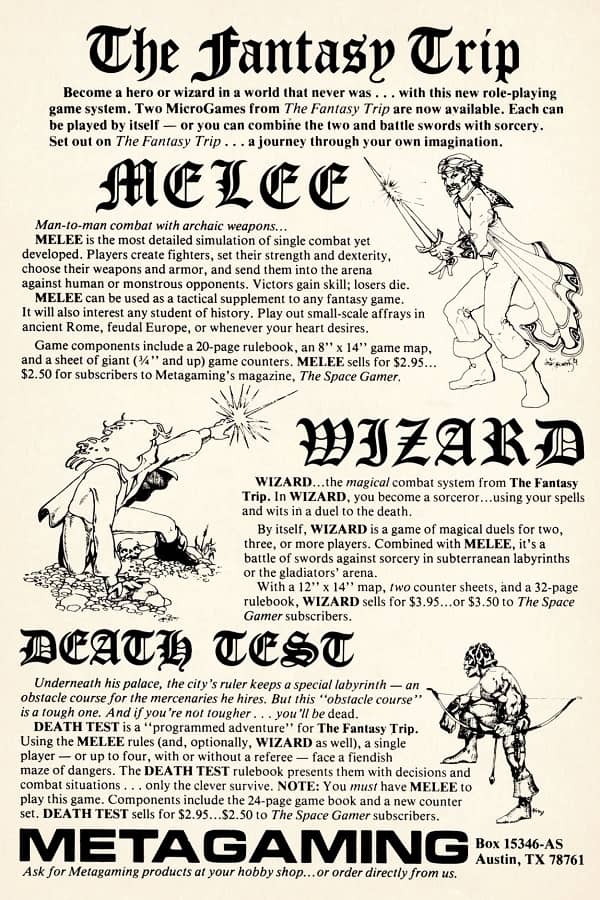 Shortly after we started playing Melee, the Dungeons & Dragons Basic Set came out. My cousins, Scott and Jeff, and I had pooled our resources earlier to pick up Dungeons & Dragons, but we hadn’t done much with it. The Basic Set really launched our D&D playing, before we moved on to Advanced D&D as it was being released. 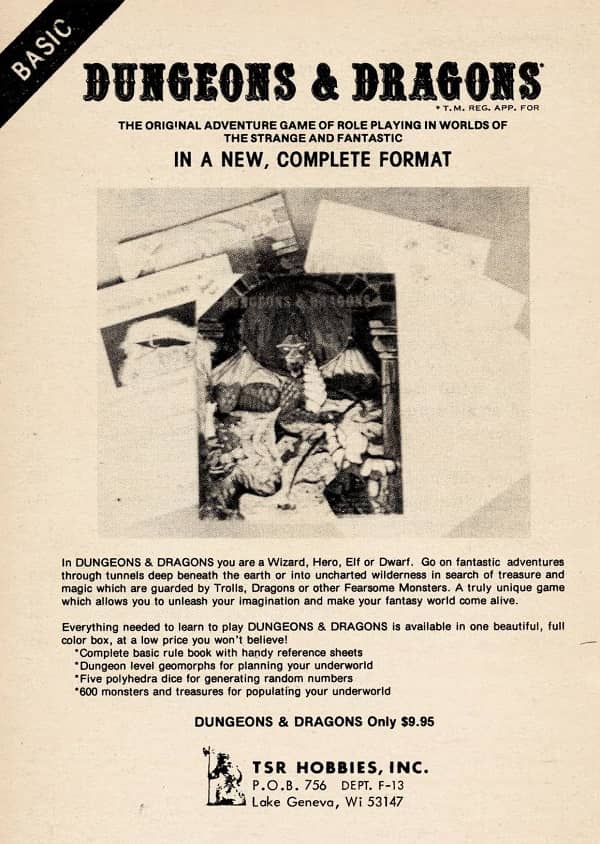 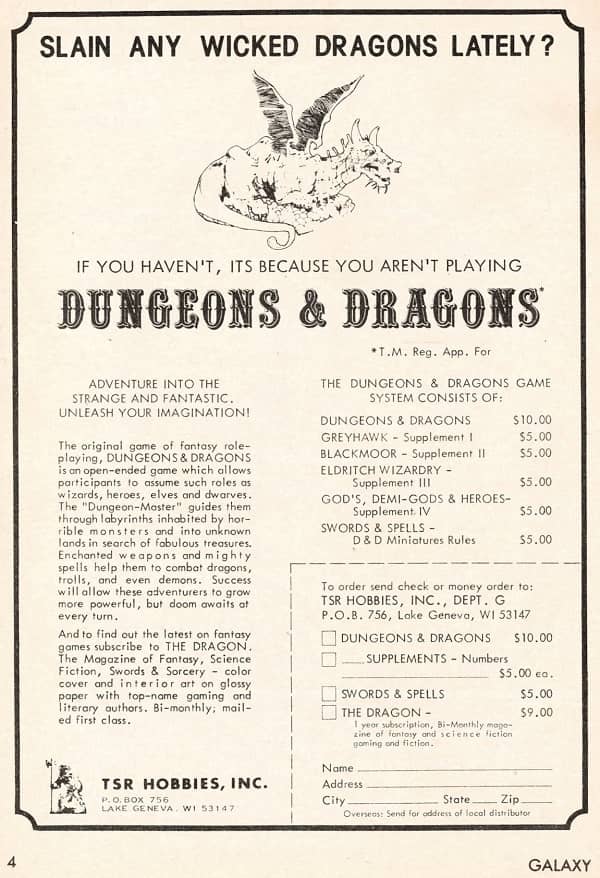 From that point on, through high school and college, most weekend nights were spent with our gaming group. AD&D was our usual game of choice, but we did mix it up quite a bit with other RPGs, such as RuneQuest, Call of Cthulhu, Justice, Inc. and James Bond 007, as well as a mixture of board games. I also ran a pulp-based RPG set in the 1930’s for a while which I titled “Beyond the Law,” which grabbed rules from various systems as well as my own. 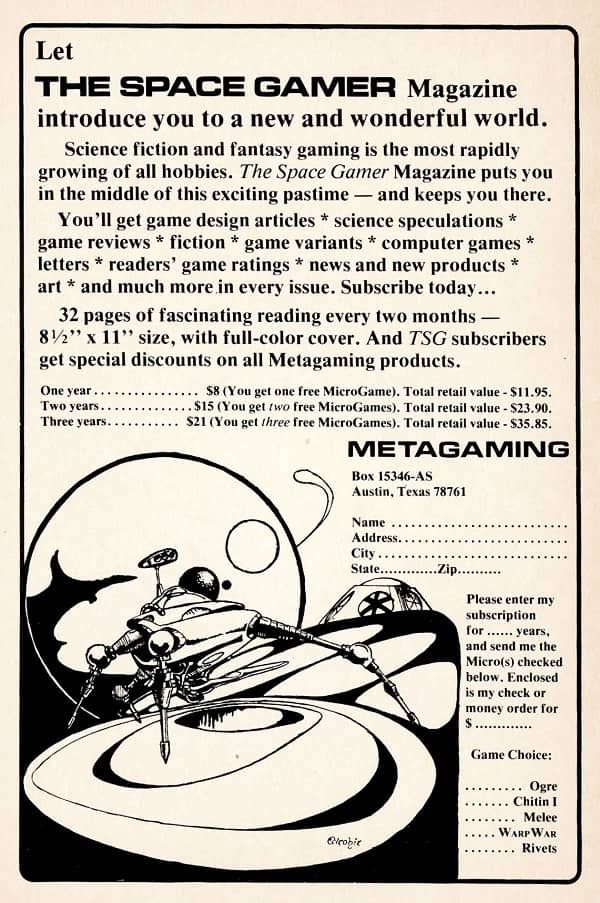 All my game purchases in those early days were via mail, as at the time Buffalo didn’t have a wargame shop. I think the first one I ever went to was in December 1979, when we went on vacation to Orlando with my cousins’ family. My cousins and I had learned that there was a wargame store in Orlando, and we talked my dad into driving us there. 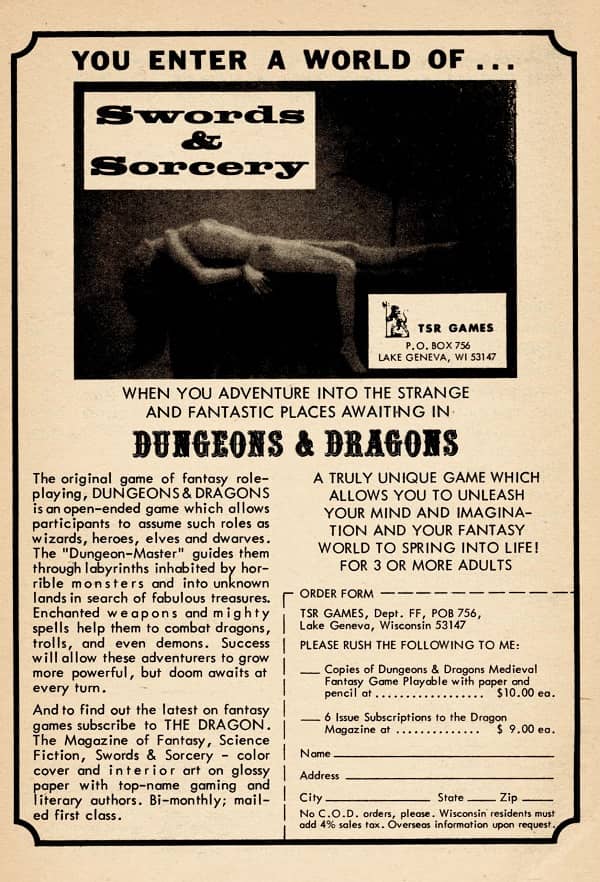 It was better than Disney! I remember picking up several issues of the gaming APA, Alarums and Excursions, as well as David Hargrave’s Arduin volumes there. By the time I was a junior in high school, a game store did open in Buffalo, and we used to drive to that frequently.

These days my gaming is limited to playing The Lord of the Rings online, but perhaps someday I’ll find the time to return to old school gaming!

Doug’s last article for Black Gate was The Art of Things to Come, Part 3

Doug — oh man, this brings back some memories!

I started reading SF digests just a few months after you, in June 1977. And those tantalizing gaming ads were too much to resist!

The first game I ordered was OGRE and then WIZARD, and then MELEE. I played all three of them to death. Two years later I found a local gaming store in Ottawa, FANDOM II, and bought my first copy of DUNGEONS & DRAGONS. And the rest of course is history.

But those SPI ads!! They were glorious and mysterious and much too expensive for me, of course. It was such a thrill when Metagaming started publishing games in my price range ($2.95!).

And you’re right about THE SPACE GAMER. It rocked.

Our paths were parallel!

Wow – I remember those. I had Ogre, Sorcerer and a subscription to Space Gamer. Still have a copy of Ogre on my PC that I play periodically.

I should look into loading that on my PC. I have a copy of the PC game too.

The ads! The games! I remember so many of them, in particular SPI’s Swords & Sorcery, which featured armored (“killer”) penguins and the O.R.C. (Orkish Revolutionary Council, the bolshevik goblins).

My favorite ad of all was the one that TSR used to run in the “slicks” like OMNI magazine, the one featuring a man in a business suit, fur-lined cape, Crusader helmet, and longsword, seated atop a motorcycle, with the legend: “The Dungeons & Dragons player … always ahead of the game!”

Yeah, they did run a few interesting ads in the slicks!

Eugene — I can’t recall ever seeing that ad in Omni (though I bought the magazine religiously), but I was able to find it with a quick Google search…. 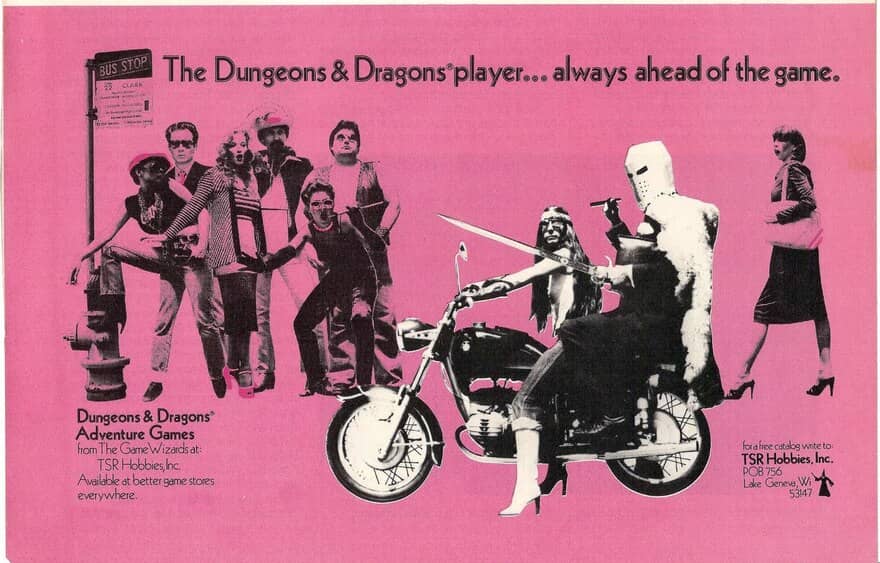 It may be my favorite, gonzo advertisement of all gaming ads. And I confess to remembering it from OMNI due to a, uh, cut-and-paste procedure that I performed on said copy of OMNI to retrieve this ad.

Oh, those ads, they’re full of memories. But makes me feel old. 🙂

Still, I feel young whenever I see “SPI.”