Aliya Whiteley is the author of The Beauty (which I described as “dystopian horror filled with cosmic weirdness, strange fungi, and terrifying tales told around post-apocalyptic campfires” three years ago), The Arrival of Missives, and Skein Island. If you’ve been paying attention, you’ve probably noticed that Whiteley is accumulating a rep for SF on the weird side.

Her newest certainly fits that mold. SFX calls Skyward Inn “A melancholy and compellingly weird tale of identity in crisis,” and Publisher’s Weekly says it’s a “deeply weird story of missed chances, invasion, and assimilation.” I don’t know about you, but those sound like compelling endorsements to me. Here’s the publisher’s description.

Drink down the brew and dream of a better Earth.

Skyward Inn, within the high walls of the Western Protectorate, is a place of safety, where people come together to tell stories of the time before the war with Qita.

But safety from what? Qita surrendered without complaint when Earth invaded; Innkeepers Jem and Isley, veterans from either side, have regrets but few scars.

Their peace is disturbed when a visitor known to Isley comes to the Inn asking for help, bringing reminders of an unnerving past and triggering an uncertain future.

Did humanity really win the war?

I really enjoyed the Beauty. In 2018, the year before funneling my interviews on “Beauty in Weird Fiction” through Black Gate, I cornered her. I had to know if she actually enjoys mushrooms.

If you are interested in her creative muses, please check it out:
http://www.selindberg.com/2018/08/aliya-whiteley-weird-beauty-interview.html

Skyward Inn promises to be as compelling.

The Beauty was really good, the only one I’ve read so far. Was tantalized by the sound of Greensmith (apparently a space opera?) only came out months ago. She’s been busy.

> In 2018, the year before funneling my interviews on “Beauty in Weird Fiction”
> through Black Gate, I cornered her. I had to know if she actually enjoys mushrooms.

What a great interview! The whole thing is entertaining, but I loved this paragraph:

The Beauty is set in the Valley of the Rocks, which is a real place close to Ilfracombe with an almost volcanic landscape; it’s a few miles from where I grew up, and I remember visiting it and feeling that its bare, rocky ground was more suited to a horror story than any romantic tale (the most famous novel set in that area is RD Blackmore’s Lorna Doone: A Romance of Exmoor, first published in 1869). Spooky things always seemed to happen in Devon – but perhaps that’s down to my teenage imagination, which liked to find monsters and darkness in every situation.

Thanks for sharing it!

> Was tantalized by the sound of Greensmith (apparently a space opera?) only came out months ago. She’s been busy.

Never heard of it, and you sent me scrambling to find it! You are entirely correct, it sounds different and very intriguing. 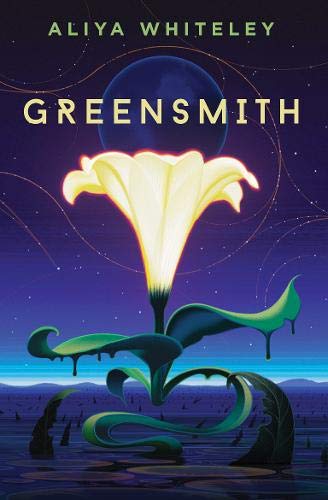 Amazon doesn’t have a lot of details, but apparently it’s published by a UK press caled Unsung Stories: