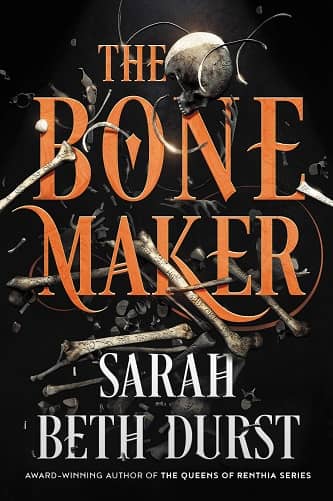 Sarah Beth Durst has been nominated three times for the Mythopoeic Fantasy Award and the Andre Norton Award. Her most recent work for adults is the 4-volume Queens of Renthia series, which opened with The Queen of Blood (2016).

Her latest, arriving from Harper Voyager next week, is a standalone epic fantasy in which a band of aging warriors have a second chance to defeat dark magic and avenge a haunting loss. This is one of my most highly-anticipated March releases, and I’m looking forward to finally having a copy in my hands.

Twenty-five years ago, five heroes risked their lives to defeat the bone maker Eklor — a corrupt magician who created an inhuman army using animal bones. But victory came at a tragic price. Only four of the heroes survived.

Since then, Kreya, the group’s leader, has exiled herself to a remote tower and devoted herself to one purpose: resurrecting her dead husband. But such a task requires both a cache of human bones and a sacrifice — for each day he lives, she will live one less.

She’d rather live one year with her husband than a hundred without him, but using human bones for magic is illegal in Vos. The dead are burned — as are any bone workers who violate the law. Yet Kreya knows where she can find the bones she needs: the battlefield where her husband and countless others lost their lives.

But defying the laws of the land exposes a terrible possibility. Maybe the dead don’t rest in peace after all.

Five warriors — one broken, one gone soft, one pursuing a simple life, one stuck in the past, and one who should dead. Their story should have been finished. But evil doesn’t stop just because someone once said, “the end.”

Bill — if you get your hands on it, check back here to let us know what you think!