When I started Black Gate magazine, I drew inspiration from small press magazines of the 70s, 80s and 90s that I deeply admired. It was a a fairly short list, but it included W. Paul Ganley’s Weirdbook, the Terminus Weird Tales edited by George H. Scithers, John Gregory Betancourt and Darrell Schweitzer, and Stuart David Schiff’s Whispers.

One of the many inspirational things about Whispers — apart from its phenomenal success — was that it was virtually a one-man operation. Stuart Schiff grew his tiny magazine from humble beginnings as essentially a slender black-and-white fanzine in 1973 into one of the most influential horror mags of the century, with a spinoff line of paperback anthologies, limited edition hardcovers, magazines supplements, and of course a Best of collection. 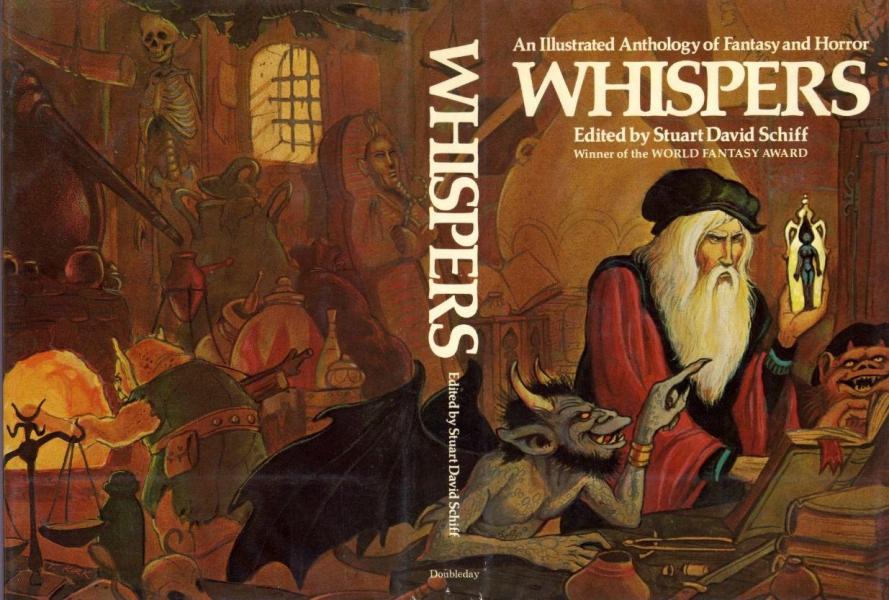 Wikipedia has a fine summary of the magazine’s history.

Named after a fictitious magazine referenced in the H. P. Lovecraft story “The Unnamable,” Whispers began as an attempt by editor and publisher Stuart David Schiff to produce a modest semi-professional little magazine that hoped to revive the legendary Weird Tales in a small way… It went on to become a more elaborate showcase for dark fantasy fiction and artwork of the 1970s… The magazine won the first “Howard” or World Fantasy Award for non-professional publishing in 1975, though it was clearly on a professional level in editorial content and production….

Beginning in 1978, an anthology series, drawing on work published in the magazine and mixing some new material, was published in hardcover by Doubleday and then in paperback by Playboy Press, soon after absorbed by Berkley/Putnam, which began a trend of parallel publication of increasingly infrequent issues of the magazine and a string of anthologies with an ever-larger proportion of original fiction. A total of six anthologies were published through 1987, and later a Best of volume was published in 1994.

Not too surprisingly, I first discovered Whispers through the paperback anthologies. 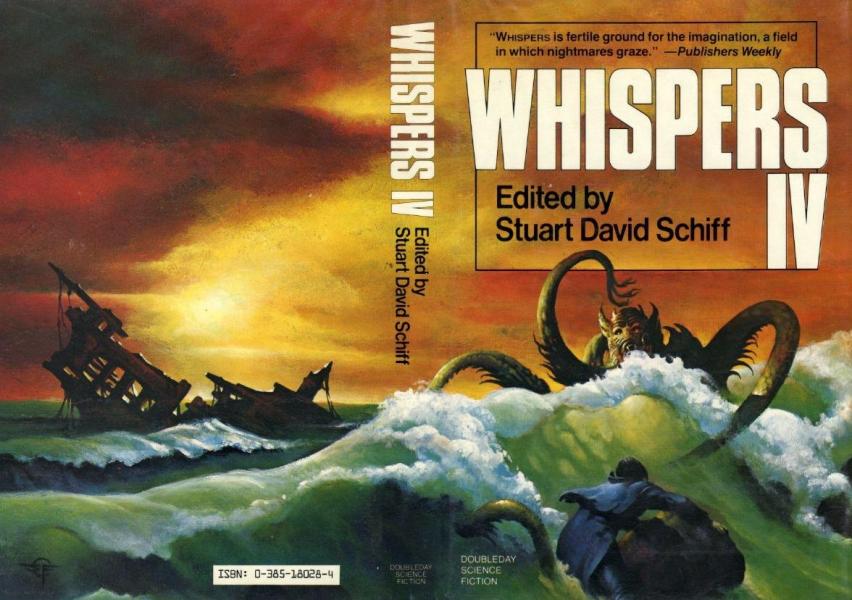 It was a success, and was reprinted in paperback by Jove / HBJ two years later, with a brand new cover by Rowena Morrill. Here’s a look.

The first anthology, a fat 320-page treasure that stood out on store shelves in 1979 and offered an incredible line-up of authors, was the book that introduced me to Whispers. Here’s the complete table of contents.

Introduction by Stuart David Schiff
“Sticks” by Karl Edward Wagner
“The Barrow Troll” by David Drake
“The Glove” by Fritz Leiber
“The Closer of the Way” by Robert Bloch
“Dark Winner” by William F. Nolan
“Ladies in Waiting” by Hugh B. Cave
“White Moon Rising” by Dennis Etchison
“Graduation” by Richard Christian Matheson
“Mirror, Mirror” by Ray Russell
“The House of Cthulhu” by Brian Lumley
“Antiquities” by John Crowley
“A Weather Report from the Top of the Stairs” by David Lunde and James Sallis
“The Scallion Stone” by Basil A. Smith
“The Inglorious Rise of the Catsmeat Man” by Robin Smyth
“The Pawnshop” by Charles E. Fritch
“Le Miroir” by Robert Aickman
“The Willow Platform” by Joseph Payne Brennan
“The Dakwa” by Manly Wade Wellman
“Goat” by David Campton
“The Chimney” by Ramsey Campbell
Afterword by Stuart David Schiff

Starting in 1987, Jove began reprinting the entire series as a handsome line of paperbacks with covers by Marshall Arisman. It’s a challenge to track them all down today. I don’t have any of them (yet).

I’m grateful to Stuart Schiff for showing just what was possible to accomplish with a small press magazine. It inspired me — in many ways — to dream big and take big risks with my own magazine, most of which paid off handsomely. 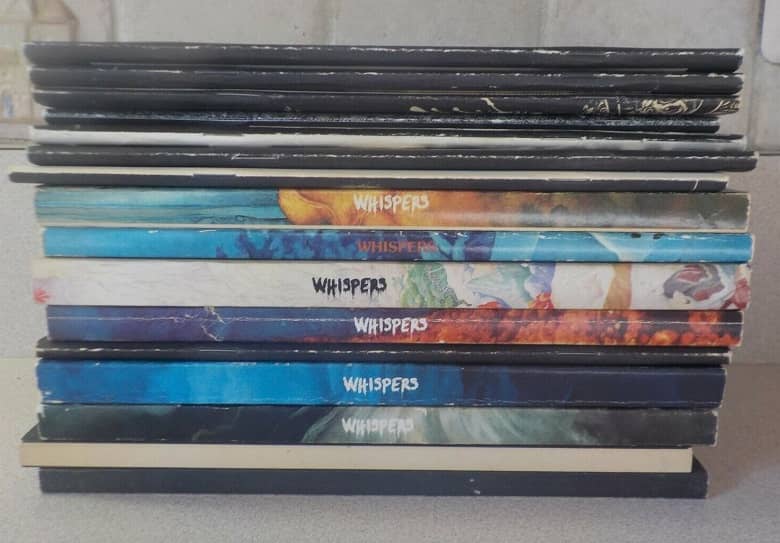 A complete run of Whispers

If you’re a magazine collector, it’s definitely an aspirational challenge to compile a compete run of Whispers. The later issues had decent print runs and distribution, and are still available inexpensively. Not so for the early fanzine issues, most of which I’ve never seen.

Every once in a while a complete run will come up on eBay (like this one, priced at $270 for the entire set, about $17/issue, which seems like a good price), but that sort of takes the fun out of the hunt. Though maybe that’s just me.

If you’re interested in vintage horror anthologies like Whispers, Night Visions, and Borderlands,  Will Errickson has a fine retrospective up at Too Much Horror Fiction.

I never had any of the magazines, but I got all of the paperbacks as they came out. (were there only six?) Great, disturbing stuff between those covers!

I wish I’d snapped up all the paperbacks as they were released! I don’t have any of the Jove editions with the Arisman covers.

Same here. I never got the magazines but i bought the six paperback anthologies ( that I still have). Wonderful times…Whispers, Charles Grant’s “ Shadows” and in the UK the Fontana Boos of Horror and of Great Ghost Stories. I’m feeling very nostalgic…

That first Doubleday hardcover appeared in my local public library, back in the day, with that mysterious cover, lacking in blurbs or come-ons. And inside, some stories. “Sticks”, with the Lee Brown Coye illustrations that inspired the story. David Drake with a dark bit of sword & sorcery (sword & noir?), “The Barrow Troll”. Two stories in, and I am hooked.

I have not found the original ‘zines, only the books, and not even all of the lovely Jove editions. Oh well, more hunting to do!

I’ve only got one issue of the original run (13-14) but I’ve got volumes I, III, IV, and V of the Arisman editions, plus the hardcover and several of the original paperback with the Rowena cover.

My goal is to track down a complete run.

> Wonderful times…Whispers, Charles Grant’s “ Shadows” and in the UK the Fontana
> Boos of Horror and of Great Ghost Stories. I’m feeling very nostalgic…

I know SHADOWS, but the Fontana ones must be British series I’m unfamiliar with.

Seven years ago I wrote up a marvelous pair of Fontana horror anthologies. I thought at the time I’d explore more Fontana books, but I never did. Are they worth tracking down?

> “Sticks”, with the Lee Brown Coye illustrations that inspired the story. David Drake with
> a dark bit of sword & sorcery (sword & noir?), “The Barrow Troll”. Two stories in, and I am hooked.

“Sticks” is considered a modern horror classic. According the ISFDB it’s been reprinted over 40 times!

I haven’t read “The Barrow Troll” but I’m intrigued by your description. 🙂

> My goal is to track down a complete run.

Ambitious! I snapped up the magazines when I used to find them in the Dealer’s Room at the World Fantasy Convention (and other place) and it wasn’t too hard to find issues in the double digits. Those earlier ones though…

Good luck with your search!

I would rank “Sticks” as one of the ten most frightening stories I’ve ever read. It still makes me uneasy when I think about it.

I first became aware of WHISPERS because of the section devoted to it FIRST WORLD FANTASY AWARDS edited by Gahan Wilson; Schiff and Fritz Leiber co-edited the second and last WFA anthology I’m aware of, which seems like reasonably enough commercial property to be scooped back into production, and Gerald Page’s volumes of THE YEAR’S BEST HORROR STORIES, which I caught up with Series V when it was new. Started buying the magazine new, sporadically, with the Leiber double issue, and have gote back and bought about half the run so far, as well as having either hardcover or pb copies or both of every volume of the book series.

John, I’l take issue with how you group the writers…Leiber and Bloch were pulpsters as well as writers for other markets to a Much greater extent than Brennan was, and King isn’t too much more “modern” (given when they both first published) than, certainly, Zelazny.

Also, a complete run of the magazine needs the split last issue of WHISPERS and WEIRDBOOK (earlier series!)….