DAW Books is one of the most prestigious and successful science fiction imprints in the industry, regularly publishing top-selling authors and titles. Fifty years ago…. well, it wasn’t any of those things. Donald A. Wollheim built his scrappy publishing powerhouse the old fashioned way: by buying the best books he could find on a shoestring budget, slapping whatever cover art he could find on the cover, and moving on rapidly to the next book.

Wollheim gave a lot of brand new authors (and forgotten authors, and washed up authors) a chance — and in many cases, multiple chances. Many, like C.J, Cherryh, John Brunner, Tanith Lee, Mercedes Lackey, and Melanie Rawn, grew with the imprint and gradually became big names. And a great many…. didn’t.

Stuart Gordon is in the latter category. He published a trilogy of science fiction paperbacks in the early 70s, then promptly abandoned SF, moving on to biker books like The Bike from Hell and The Devil’s Rider (both written as Alex R. Stuart). But I used to see One Eye, Two Eyes, and Three Eyes on the shelves when I was a wee lad exploring the science fiction racks for the first time, and they always fascinated me.

Part of it was the subject matter: a strangely powerful mutant roaming a blasted post-apocalyptic landscape and…. I dunno? Carrying unconscious women around? I was never clear on the concept, actually. But hey, mutants and blasted mountain peaks! That’s all it took to fascinate me in those days. My needs were simple. 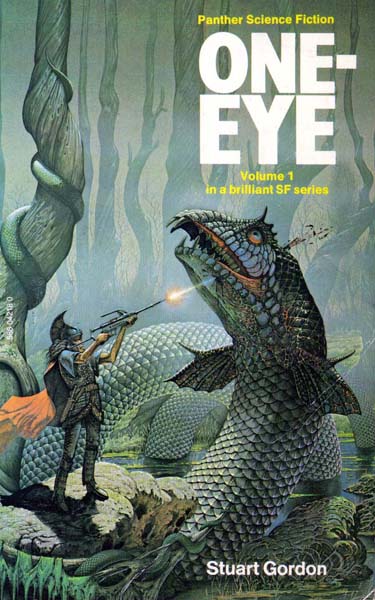 To a modern eye, there probably isn’t much that’s fascinating about these books. They look very much like what they were: midlist titles from a lower–tier publisher. The covers are uninspired — at least the ones not painted by Michael Whelan or Patrick Woodroofe, anyway — and 45 years after I first set eyes on them, the text on the covers still stubbornly refuses to stick in my memory. Whoever slapped the cover blurbs on these books utterly failed them. (A mutant godling who fights…. or flights? Never mind, I’m gonna put this book down and pick up that one by Poul Anderson with a spaceship on the cover.)

Still, I can’t look at these covers without being reminded of hunting through used bookstores in Ottawa in the mid-70s. I think you had to grow up in an era when science fiction was much less ubiquitous to find something to cherish in these books. Perhaps it’s because they have remained an enigma to me, despite being familiar with them for four decades, that curiosity endures.

More likely it’s just nostalgia for a time when every new SF paperback was an event — and when they were widely available for months, and seemed less ephemeral as a result. Sure, there were fewer titles to choose from, but that meant reading was a little more communal. It wasn’t hard to find someone who’d read and enjoyed the same books as you, and was willing to share your strange and quirky joy in a dopey paperback trilogy.

So is the Eyes trilogy a forgotten classic? Eh. Not likely. Unlike a lot of his contemporaries, Gordon’s first SF novel One Eye was thrust out into the marketplace without a lot of laudatory blurbs on the cover. Or any, for that matter. Same with the second book. And the third.

Do these back covers look naked to you? One Eye, Two Eyes,
and Three Eyes, all with a distinct lack of blurbs.

Well, critical acclaim isn’t everything. You can find a few intriguing mentions if you dig around — like John Clute’s concise summary of the trilogy at The Encyclopedia of Science Fiction.

In his Eyes books… the Mutant One-Eye triggers the forces of chaos in an apocalyptic Ruined Earth venue a thousand years after a nuclear Holocaust, where humanity fights a losing battle against genetic decay; in increasingly elaborated prose (Gordon’s main fault as a writer was an inadequate control over imagery) the trilogy proceeds to a complex self-confrontation of mankind.

“Stuart Gordon” was a pseudonym for Scottish author Richard Gordon, author of dozens of books in many genres. He died in 2009.

The Eyes trilogy has been out of print since the late 70s, and there are no digital editions. The series is not particularly collectible, and copies are available starting at around $1 on eBay and Abe Books. I bought the unread set above on eBay in November for $5 plus shipping.

Interested in other early DAW titles? LibraryThing has an up-to-date list (in chronological order) of all 1,853 DAW books published so far right here.

See all our coverage of the best SF and fantasy series here.

The Irish angle is interesting (leaving aside the names of the heroes in the first two books, ‘Phadraig’ is just the Irish for Patrick) but what really caught my eye was the Woodroffe cover for the first book in the series, as I had a poster of that exact cover on my bedroom wall as a teenager. It was replaced (if memory serves me correctly) with Roger Dean’s ‘Bedside Manners Are Extra’. Both good choices, I think.

Aonghus ‘Phadraig’ is Gaelic for Patrick, not Irish. Gaelic is not necessarily Irish as there is Scottish Gaelic also (and Manx Gaelic).

Patrick Woodroffe and Roger Dean…. you clearly had access to much superior posters than I did as a kid! I had a poster of a Lamborghini on my wall, and a 2010 movie poster.

Still available if you’re interested! (albeit a bit pricier than I remember)

Nope, not deleted. Just held for moderation by an admin if it’s been the first time you’ve commented since our site move and WordPress update. I approved your comments this morning.

You sure, Jocko? I’m Irish myself – and my middle name is Padraig. There are a lot of similarities between Scots Gaelic and Irish. In Ireland, there are two variations of the name, that I know of, as gaeilge. ‘Padraic’ and ‘Padraig’.

That said, I was incorrect in saying it’s an exact translation. ‘H’ is often introduced into a word to indicate the possessive – e.g. ’Scoil Phadraig’ (Patrick’s School).

Or if you prefer (in my truly terrible Irish) –

(with thanks to Google for clarifying ‘a few’ spelling errors)

Sorry, Cosluchtai (in fairness, that was a typo). Plus ‘is’Padraig mo dara ainm. Oh well….

(Silently scraping all plans to write my next review in Irish…)

If back in the day when I was in art college and the teacher asked me to talk about these images, I would probably have said that they’re well done but, they don’t say anything to me.

Talk about future shock! When I first read Mr. O’Neill’s comment, my brain wondered when the heck he was in high school to have a movie poster from 2010 on his wall. Then a fragment of memory of Helen Mirren in a spacesuit bubbled up and … oh, now it makes sense.

And holy cats! I totally forgot Helen Mirren was in this movie! 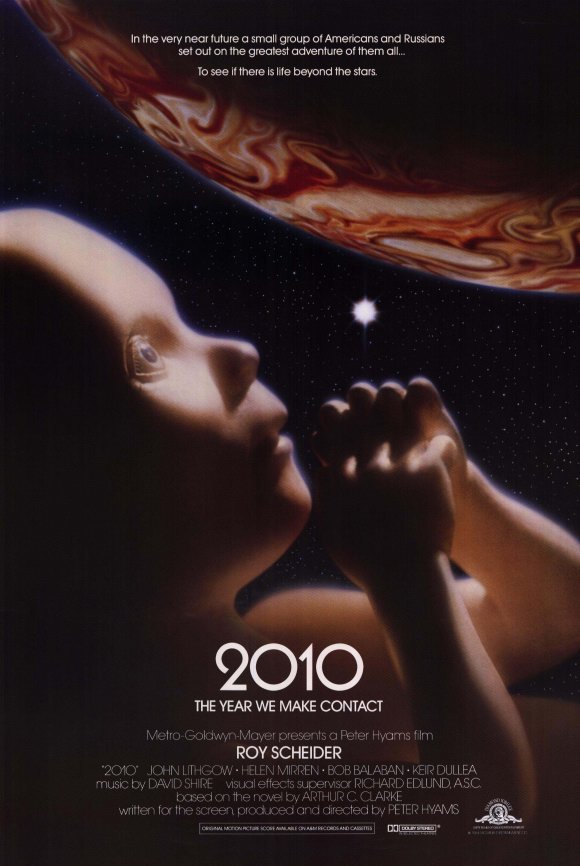