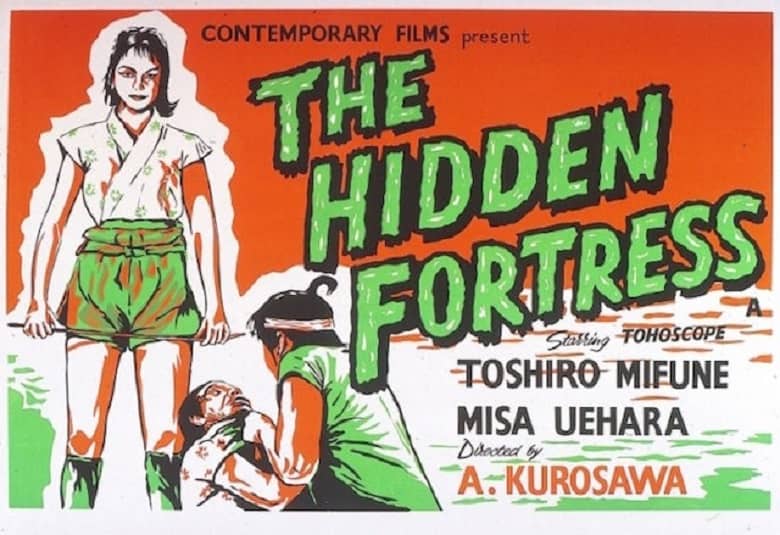 Akira Kurosawa’s Seven Samurai had done well for Toho Pictures so Kurosawa was encouraged to produce other samurai-era films, and during the late Fifties and early Sixties he alternated making historicals with crime films. Kurosawa was at the height of his creative powers, with a brilliant production team that was devoted to him, and a reliable revolving cast topped by his go-to lead, the versatile and charismatic Toshiro Mifune. These movies had a huge influence on American and European films of the Sixties and Seventies, an influence that persists today several creative generations later. These are deep films, richly nuanced and technically impressive — but best of all, they’re so much fun to watch.

The sound bite on The Hidden Fortress is that it’s the Kurosawa film that inspired Star Wars, but if you go into it expecting to see some kind of samurai cognate to the Skywalker saga, you’re going to be disappointed, and worse, you may overlook the very real pleasures this film has to offer. Yes, Hidden Fortress did inspire some aspects of George Lucas’s approach to Star Wars, but just put that aside and let this movie win you over on its own terms.

This is the director working firmly within the tropes of the chambara, or historical swordplay film, but he can’t resist subverting those tropes even as he displays his mastery of them. Kurosawa does this from the very beginning: a bombastic march plays over the opening credits, dissolving onto a shot of a country road — but instead of a masterless samurai striding into a new adventure, down the road come staggering a couple of losers, two failed would-be warriors fleeing the aftermath of a battle. These clownish peasants, Matashichi (Kamatari Fujiwara) and Tahei (Minoru Chiaki), are greedy and feckless cowards who bicker constantly. But this pair of clowns will provide the picture’s point of view, and we’ll view the actions of the ruling samurai-class characters, heroic and not-so-heroic, through the eyes of these ordinary folk.

The two losers, lamenting their fate, are on the run after the Akizuki clan was defeated and nearly destroyed by the Yamana. Though they’d intended to fight for the Yamana, the pair are soon swept up with the fugitive Akizuki and pressed into forced-labor gangs digging through the ruins of the Akizuki clan’s castle, seeking its hoard of gold. The Yamana samurai treat the captive workers like animals, and they rise up (with no help from Matashichi and Tahei) in a brilliantly depicted night revolt in the ruins. (This is Kurosawa’s first widescreen film, and he uses the format’s scope and depth-of-field to great effect.) The clowns take the opportunity to escape and soon revert to the status of fugitives starving in the countryside. They try to return to their home province of Hayakawa, but the Yamana guard the border and they’re foiled. Desperate, they make their way into the mountains, where they build a campfire to cook some stolen rice. But inside the firewood, hidden in a thick branch, they unexpectedly discover a slim gold bar stamped with the Akizuki crest. Have they discovered a clue to the lost Akizuki hoard?

Indeed they have, and more than that, they discover the hoard’s guardian, the Akizuki general Rokurota Makabe (Toshiro Mifune), and the clan’s sole surviving leader, Princess Yuki (Misa Uehara), who’ve taken refuge in a mountaintop “hidden fortress.” Rokurota presses the clowns into service by exploiting their greed for the gold, but the searching Yamana are closing in, so the four, with the two samurai disguised as commoners, set out to try to get across the border to Hayakawa.

Now we are firmly in chambara adventure territory, and Kurosawa alternates scenes of exciting samurai action with poignant interludes among the peasantry, where the disguised princess, who’s been raised in a castle, learns what life is like outside the samurai’s rigid and duty-bound society. These scenes are wonderful, moving and sharply drawn, but the pace doesn’t flag, and in between them we’re treated to the greatest samurai spear fight ever filmed, as Rokurota duels and defeats Hyoe Tadakoro (Susumu Fujita), a Yamana champion. Tension grows as the Yamana close in on the fugitives, and the movie rushes toward its climax, which I won’t reveal, but it’s both exciting and satisfying. The film ends as it started, with the two rueful peasants walking away from the deadly honor-driven milieu of Japan’s warrior class, headed home to their village at last. 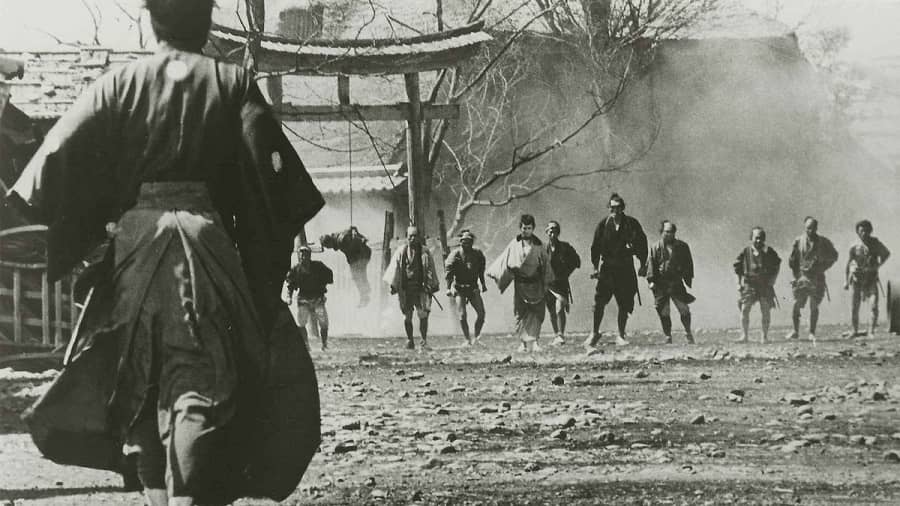 Do you like badassery? Because Yojimbo is where the goody-two-shoes Fifties end and the bad-ass Sixties begin.

Director Akira Kurosawa co-wrote his story inspired by American Westerns and the hard-boiled crime novels of Dashiell Hammett — and boy, is it hard-boiled. A nameless, shabby ronin, or masterless samurai (Toshiro Mifune), wanders into a nameless, shabby town where the first creature he meets on the street is a dog running past with a human hand in its mouth. Clearly, this is a town with possibilities for a warrior-for-hire! The ronin soon learns that the town is consumed by a gang war, one gang run by Seibei (Seizaburo Kawazu), its long-time crime boss, and the other by Ushitora (Kyu Sazanka), Seibei’s former right-hand man. The two sides have been hiring thugs and bandits in expectation of a showdown, but they’re in a stalemate until the arrival of the ronin, who smells a profit and proceeds to upset the balance.

The ronin, who when asked his name picks “Sanjuro” out of the air, is so good with his sword that he could easily end the conflict by leading one side to victory, but it soon becomes clear that he has a greater challenge in mind: ridding the town of corruption entirely by exterminating both factions. He’s dogged in pursuit of this goal, switching sides several times, waiting it out when a magistrate shows up in town, which enforces a truce for a few days, and then stirring up trouble between the factions when they contemplate a genuine truce.

The balance of power changes again when Ushitora’s younger brother Unosuke (Tatsuya Nakadai) returns to town armed with a six-gun. He’s not only better armed, he’s also smarter than the other goons; he figures out what Sanjuro is up to, and soon the ronin is captured and in a world of hurt. Desperate measures are called for.

This film is almost a stage play, set entirely on the town’s main street, with a gang lair at either end and Sanjuro’s headquarters in the middle, a rundown tavern run by the sourest old man on the planet. Despite this setup the film never gets stagey, thanks to Kurosawa’s innovative compositions and fluid camerawork. It’s also darkly funny, which keeps it from becoming unrelentingly grim. The film takes its time a bit in the middle, getting everything set up for the final confrontation, but wow, what an ending!

Hugely influential, Yojimbo was remade by Sergio Leone with Clint Eastwood as A Fistful of Dollars, the first big success of the so-called Spaghetti Westerns. From Yojimbo you can draw a straight line through The Good, the Bad and the Ugly to The Wild Bunch, Escape from New York, and Conan the Barbarian. If you like any of those, Yojimbo is for you, even if you think you don’t want to watch a black-and-white movie with subtitles. Look, if you need a final nudge, there’s this: one of the criminal thugs is a seven-foot giant with an enormous wooden mallet. How cool is that?

There’s a grunt from the next room, and a scruffy warrior emerges from the darkness where he’d overheard their conversation. It’s Sanjuro (Toshiro Mifune), the wandering ronin, or masterless samurai, from director Kurosawa’s previous film, Yojimbo. Humorously gruff, he tells the youngsters that they’re fools, it sounds to him like the chamberlain is a great man, and under no condition should they trust the superintendent. “But we’re meeting him here tonight!” says the nephew.

The ronin’s demeanor instantly changes. Suddenly alert, he peers out the barn windows and informs the youngsters that the barn is surrounded by the superintendent’s men. The young samurai draw their swords, ready to fight and die — but the ronin has a better idea.

The grim and gritty Yojimbo had been a big hit for Kurosawa, but though Sanjuro has the same protagonist played by the same star, facing off against the same actor (Tatsuya Nakadai) who’d played the lead villain in Yojimbo, the sequel has a very different tone from its predecessor. This is largely because it didn’t start out as a sequel at all, but as a standalone story, a humorous historical crime tale about a clever hero with more brains than brawn. But Yojimbo was such a success that Kurosawa’s studio, Toho, encouraged him to make his next film a follow-up, and they didn’t have to twist his arm very hard to get him to do it. The film’s detective hero morphed into Sanjuro, the story was reconfigured to play to the scruffy ronin’s strengths, and action scenes were added that made it less of a humorous jidaigeki (historical drama) and more of a chambara (story of swordplay). But it retained a lot of its original ironic tone, and may be Kurosawa’s funniest film.

The heads of the nine young samurai are filled with the honor code of bushido and romantic notions of heroism, and Sanjuro is repeatedly forced to intervene in their plans to keep them from getting killed, in scenes that are both thrilling and hilarious. Sanjuro reluctantly assumes leadership of the effort to save the chamberlain, whom the youngsters have compromised, and take down the superintendent. But the superintendent commands scores of armed warriors, the most dangerous of whom is Muroto (Nakadai), a veteran rogue almost as experienced as Sanjuro. Nonetheless, after many twists and turns, the ronin, relying more on misdirection than on martial prowess, manages to turn the situation in favor of the youngsters. But there will be a final, and shocking, confrontation with Muroto that you’ll never forget. Don’t miss this one.

Kurosawa is one of the greats. It goes without saying that his masterpiece is the Seven Samurai, but all of these movies are great.

Another fine post.
There’s many reasons to celebrate these films but I’m always blown away by their cinematography.
My Dad, who was an art teacher, used to watch Kurosawa’s stuff on videotape and consistently pause the film to admire how each scene was framed “like a painting”.

Hey, tell me true. Did you every watch the duel at the end of Sanjuro in slow motion?

A friend, while in college, went to a showing of Yojimbo. When Sanjuro, walking into town, announces, “I want 3 coffins”, my friend immediately realized he was watching the Japanese version of A Fistful of Dollars.

Time for another look at Ellsworth’s Cinema of Swords!
These are three great films, each with different feel but all of them are worth watching and rewatching. They leave a mark.

Mr. Hocking: Did I watch that final duel in Sanjuro in slow motion? Of COURSE I did!