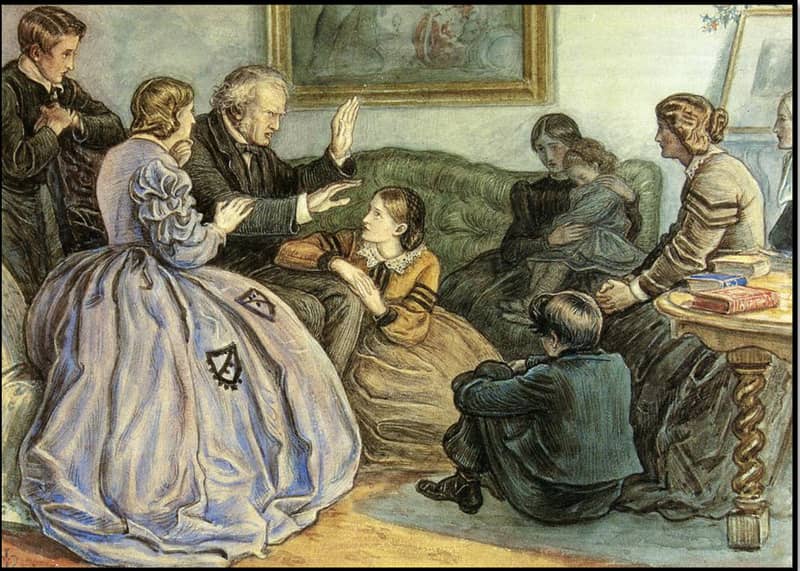 As I enter the last leg of my doctoral studies, I couldn’t help taking advantage of my university’s very impressive library to take a bit of an intellectual detour. I did a search on the origins of modern-day Christmas traditions. Not unsurprisingly our current celebrations owe most to pagan winter festivals, and the rest to mid-19th century England; either way, very little has changed.

And because you’re here at Goth Chick News, you’ve got to know that I zeroed in on the association between Christmas and ghost stories. That particular practice, as it appears in American celebrations, is actually a Victorian tradition which was as much a part of Christmas to them, as Santa Claus is to us.

“Whenever five or six English-speaking people meet round a fire on Christmas Eve, they start telling each other ghost stories,” wrote British humorist Jerome K. Jerome as part of his introduction to an anthology of Christmas ghost stories titled Told After Supper in 1891. “Nothing satisfies us on Christmas Eve but to hear each other tell authentic anecdotes about specters.”

The most obvious example of a Victorian holiday ghost story is Charles Dickens’ A Christmas Carol, which has become such a ubiquitous part of the season that most people don’t even wonder why Dickens chose ghosts to bring about Ebenezer Scrooge’s transformation. So, what is it about Christmas and ghosts that go so well together?

Late December was an important time of year to the pagans, who celebrated festivals like Yule and Sol Invictus (the birthday of the Unconquered Sun) in conjunctions with the winter solstice, or the longest night of the year. Both festivals celebrate rebirth so it’s not surprising that early Christians adopted a time on the calendar that was already celebrated by the pagan Romans and Northern Europeans, when moving them toward monotheism.

The winter solstice was also considered the one night of the year when the veil between the worlds of the living and the dead was thought to be at it thinnest. Eventually these tales evolved to the belief that on Christmas Eve, ghosts could come back to earth to complete unfinished business; and here we are back to A Christmas Carol and Marley’s ghost. Or my favorite, more contemporary example by Ray Bradbury, The Wish.

Ironically, the Victorian tradition involved blood-curdling stories that would ruin the sleep of grown adults, forget the kids around whom Christmas revolves today.

But once the lights go down on Christmas Eve, and you find yourself with some adult time at the point of the year when the veil is the thinnest, be sure to have a copy of The Valancourt Book of Victorian Christmas Ghost Stories and a nice glass of Merlot close at hand. Volume 4 came out December 1 this year, but Valancourt has published three others, each coming out in December every year since 2016. The stories in each volume are from 19th century periodicals published in the UK and the US. I’m particularly excited about Volume 4 which includes “The Green Huntsman,” a traditional Christmas ghost story from Old New Orleans which first appeared in print in 1841.

Here’s hoping your holiday spirits appear over ice only.

The Christmas Eve ghost story is a tradition my family has observed for the last twenty years, though we may have to Zoom it here in 2020. I couldn’t let it slip if I wanted to – the kids would tar and feather me.