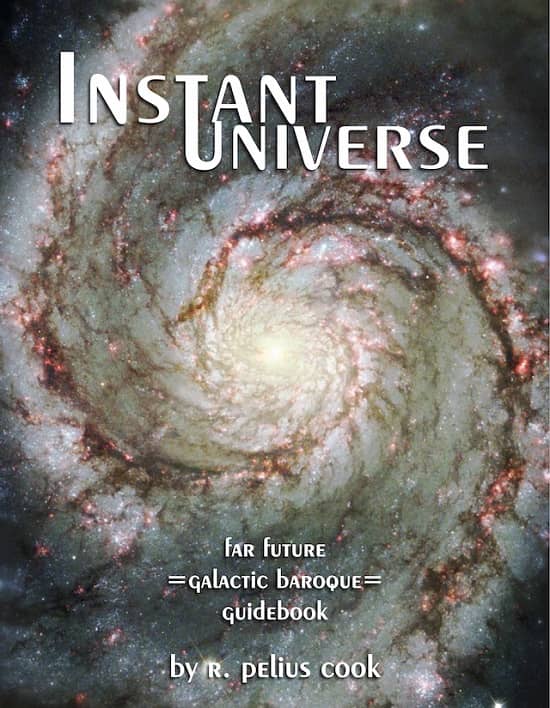 I’ll confess. I love random planet and system generator tools in roleplaying games. There I was as a young boy with the now classic science fiction RPG called Traveller, and I was able to roll up via a set of tables a planet. Size. Population. Technology level. Type of government. It provided a logical way to help game masters (GM) both create interesting worlds on the fly and help avoid our own creative traps of repeating the same planets with different scenery.

Additionally, I think it fired as much creativity as not, something that the creator of Traveller, Marc Miller, has noted. How does that small population world on a planet with a tainted atmosphere, high security level but rather liberal government function and look. The dice could result in interesting combinations the encouraged creative thinking.

Of course, the GM could ignore whatever results she wanted and choose at whim — something I, too, certainly engaged in. Nonetheless, I had a certain thrill every time I rolled up a planet and awaited its outcome.

Every edition of Traveller has had some planetary generator. A number options have shifted over time to reflect new understandings and science, but the core remains the same: grab some six-sided dice and generate the famous Traveller hexadecimal code for the description of a planetary system. 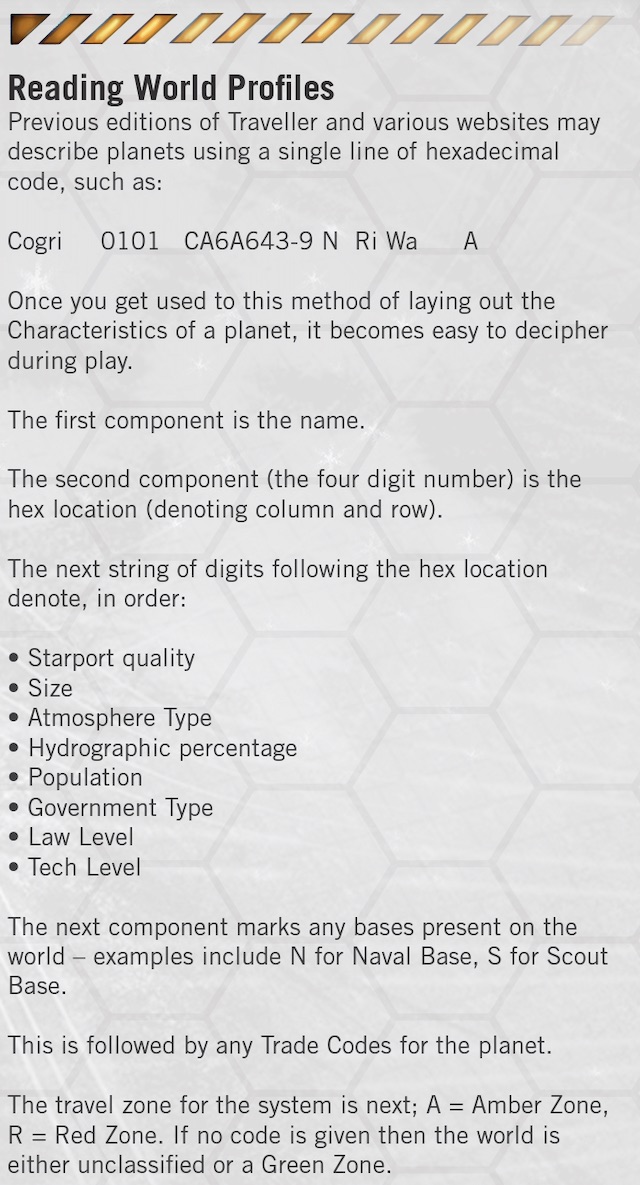 Traveller 5 is the most robust, but Mongoose Publishing’s second edition of Traveller is an excellent effort in this aspect of the game, one which they have expanded in The Great Rift box set and in the revised Journal of the Traveller’s Aid Society (JTAS). The expansions include broader system details like make up of the system’s star, binary systems, moons, other planets, and so on.

Speaking of JTAS, the journal continued on with the GURPS version of Traveller and contained many excellent articles under the editorial direction of Loren Wiseman, one of the legendary contributors and creators to Traveller from its inception to the early 2000s. One series of articles by Matt Stevens covered the governmental types and how those might appear in a game, breaking them down. What is a “charismatic government,” for example? 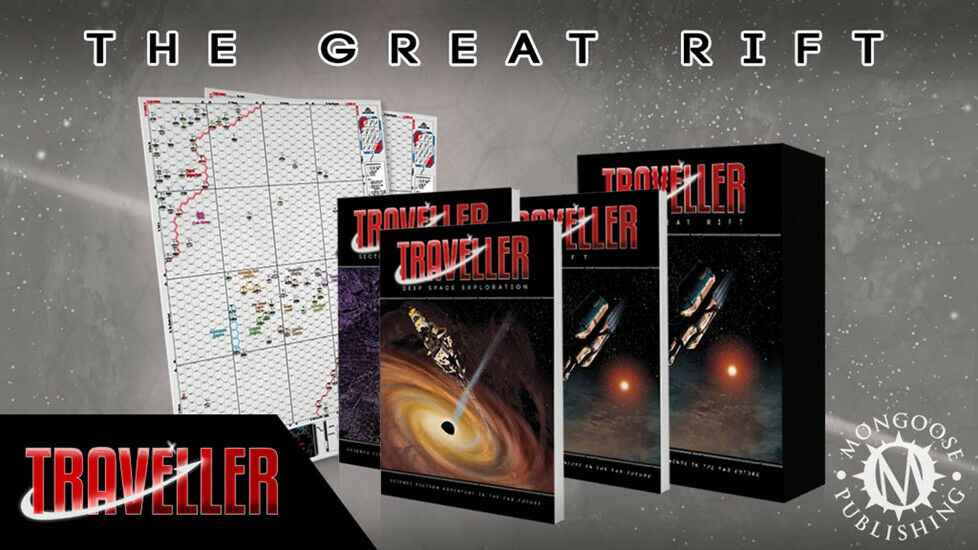 The notion of planetary creation and using dice rolls to do the task is such an embedded part of Traveller that over the decades, pages upon pages of planetary write ups using these methods have appeared in journals — fan or official. Last year, SAFCocast (a Traveller podcast) ran a “planet generation smackdown” — folks used a version of Traveller to generate a system and submit it (yes, you can hear about my submission in Episode 15).

Other science fiction RPGs make use of this, particularly games that have a focus on exploration and adventure. Stars Without Number and Coriolis (via the Atlas Compendium) are but two that incorporate the same basic concept, though with their own particular flavor. Interestingly, Star Trek Adventures does not, though a chapter does exist in the core rulebook for the basic principles of inhabitable (or not) worlds. 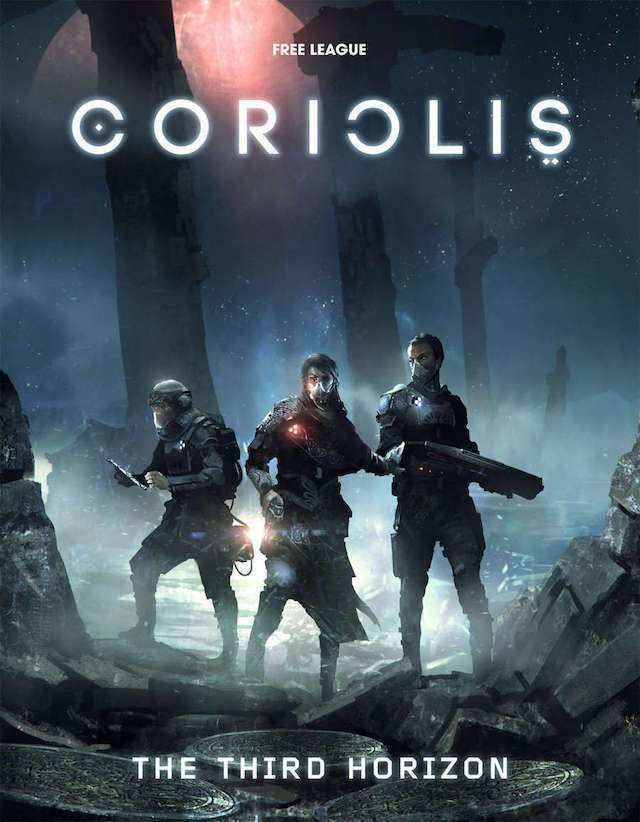 Instant Universe is a book dedicated solely to creating systems agnostic to the specific game (or even to RPGs). Author R. Pelius Cook aims to provide a way to create systems that

will vastly expand your horizons. Not merely a rulebook for random solar system creation, this guide generates exotic locales at any point from the Big Bang to the end of the Stelliferous Era that better reflect where super- and ultra-advanced technology will take us.

Where systems like Traveller focus on the planetary system without much thinking (though not zero thought) in regards to the distribution of star clusters, star types, and whatnot, Instant Universe incorporates more current scientific understanding of star formation, planetary development, and so on to create a more “realistic” system.

This isn’t to disparage Traveller’s system by any means, and we’ll see how Instant Universe only takes us so far. Rather, Instant Universe attempts to ground the creation in up-to-date science along with providing system results that are just as intriguing and useful in game settings for encounters. For example, stellar density and composition have an affect on the type of star in a system, which has an effect on potential development of life, and so on. In some ways, Instant Universe is an excellent layer on top of a Traveller-based planetary system creator to add more flavor and adventure to RPG games.

Instant Universe uses a set of polyhedral dice — in gaming parlance, d4, d6, d8, d10, d12, d20, and d100 – to generate the results. You can roll them all together, compare against the various tables, and then see what the results are. Some results will require an additional toss of some of the dice and are subject to modifiers based on the results—as are subsequent rolls later in the process. You can also roll them one at a time if you want.

Cook starts big. Big. You’ll roll for what the galaxy is first. Is it elliptical? Lenticular? Spiral? Barred spiral? Or plainly irregular? From there, you take off. In fact, you determine if the galaxy is part of a galaxy group and what is in the neighborhood. Our own galaxy is part of the Local Group, which includes many galaxies like the Andromeda, Sagittarius Dwarf, and Large and Small Magellanic Clouds. 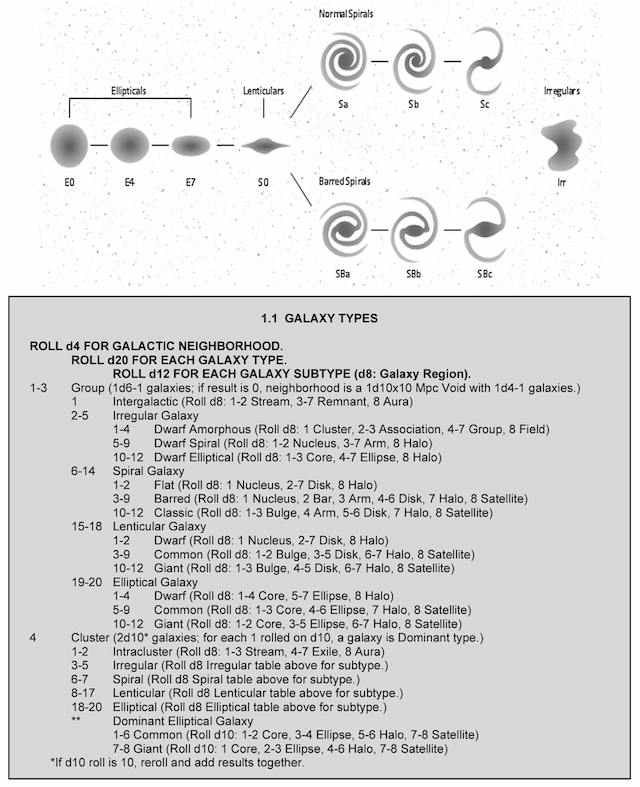 As an example of how one rolls this table, you can take all those polyhedral dice and toss them for results. I used my dice app and rolled the set. The results were (in order of the dice type): 1, 1, 8, 2, 2, 9. These translate into:

The galaxy is alone by itself and is an irregular, dwarf amorphous galaxy. It is also a compact galaxy. The compact notation is a galaxy peculiarity, of which several exist and are dependent on the type of galaxy. I can take this particular peculiarity and roll d10 to determine if it is Extremely Compacted, Very Compacted, or just Compact. 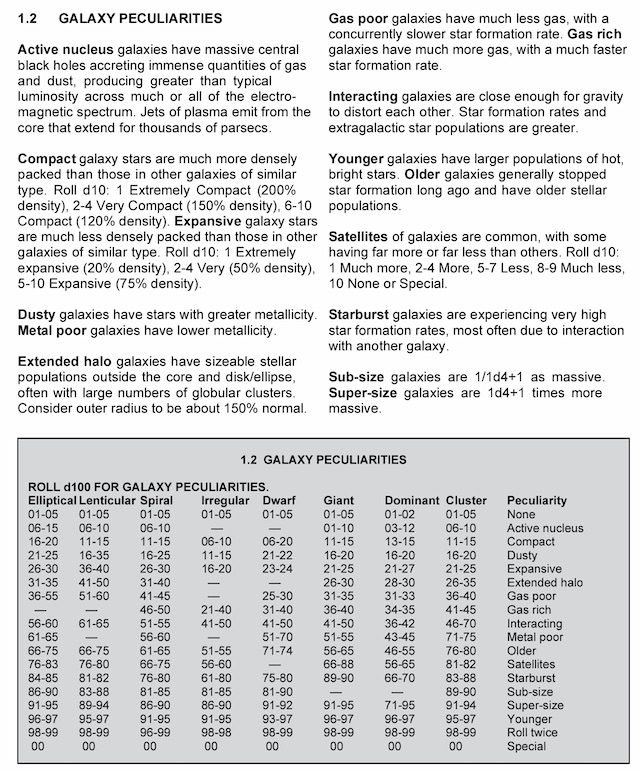 From there, I roll for star associations, which defines the stellar neighborhood and evolution. Is it younger, mature, old, or ancient? A paleodwarf? Dwarf? Superdwarf?

Now I get to the star itself. What kind of star? Blue? Red? Brown? You also roll size and age. All of these have a profound effect on the development of the planetary system, as does determining if the star is solitary or is part of a multi-star system, where the orbits of the stars can wreak havoc on system planetary formation and longevity. It doesn’t really matter if that planet was ideally suited for complex and even intelligent life if it gets tossed out of the system by the orbit of a secondary star. 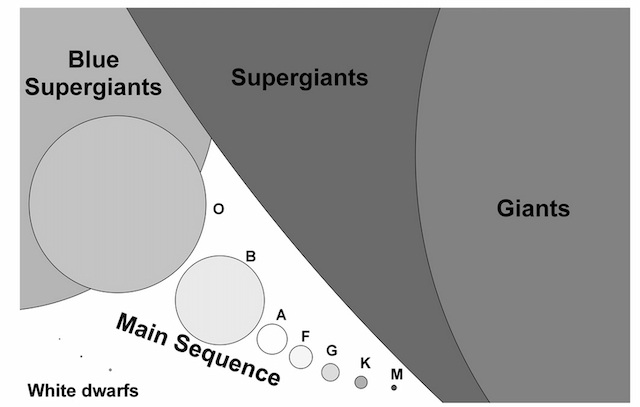 The star peculiarities are some of my favorite bits of addition to this text. Cataclysms such as rogue planets passing by, an unstable star frothing forth deadly solar flares, strong magnetic fields, variable stars, rotational anomalies, and the like.

Once you have the basic star and system information, you can dig into the planetary bodies themselves. Is it just a disk of protoplanetary material? A series of dust belts? What kind of planetary bodies? Rocky planets? Gas bodies? The peculiarities here include such things as extreme axial tilts, geologically dead or extinct, and the presence of magnetic fields. You can then determine the number of satellites and the rotational period. Again, all the various results prior continue to play out. For example, in determining the rotational period, roll d100. Compare that to a chart. In this case, if I rolled 59, the planetary body has a medium rotational period. Except, that the planetary body is in an inner orbit, and I subtract 50, leaving a final result of 9. This changes that rotational period to Resonant — that is, the orbital period x d10 divided by 3. A close orbiting planetary body subtracts 100 from that d100 roll — ensuring a tidally lock planet unless its mass is enough to counter effect that a bit.

The volatiles of a planet — i.e., the state of matter and the make up of the molecules in the body present in the atmosphere, liquids, and so on — is the next step before moving onto if native life is present. And life is broke into three categories: Basic. Complex. Intelligent.

You can carry on from there. Did the intelligent life (a pretty slim chance it did evolve) colonize beyond its planet? Its system? They have constructed some marvel of megaengineering like stargates or ringworlds? 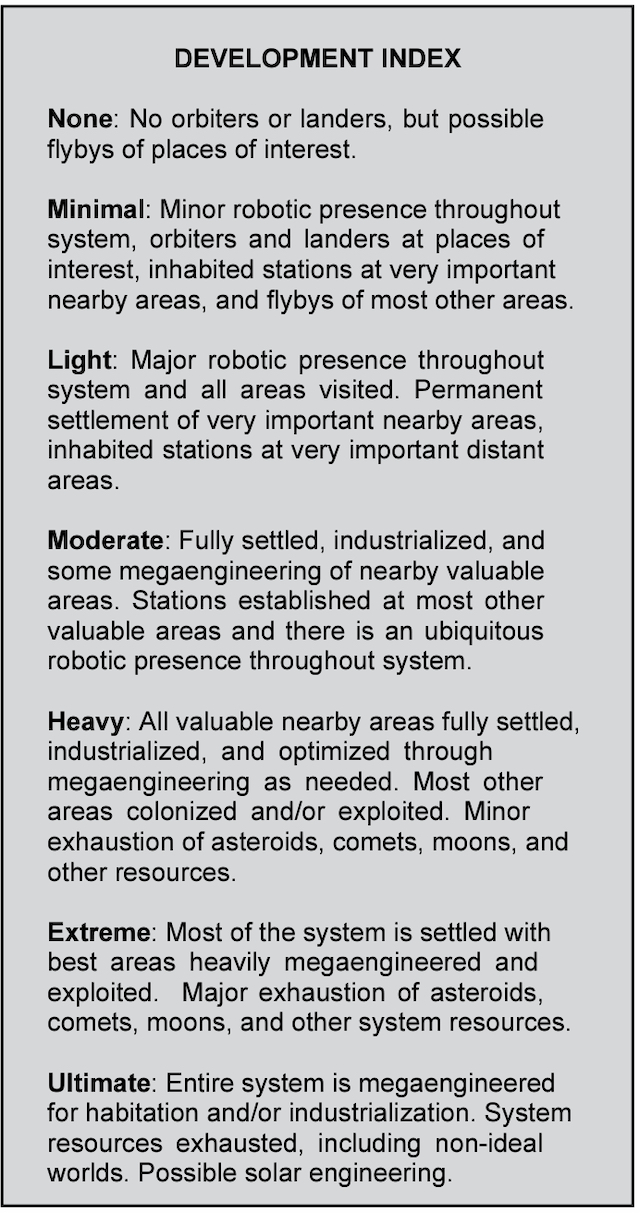 As you roll up the various aspects of the universe, Cook provides succinct descriptions that are, themselves, replete with tidbits of facts and information. Here’s an example from the planetary body pages:

Many of these descriptions provided additional roll mechanics to generate more refined information about that particular aspect. As note, this system will not get you to a typical Traveller planetary notation, but that was not its intent. That said, you can use this system to generate the stellar neighborhood and planetary bodies basing those rolls on the Milky Way as a starting galaxy — and Cook walks through building two instant universes, one of which is the Milky Way to our solar system. I think it might have been helpful to include an easy reference chart for users of the book to see those rolls without having to dig into the example. Once you have the system generated, you could then run with the Traveller rules to get starport, tech level, population, and so on. 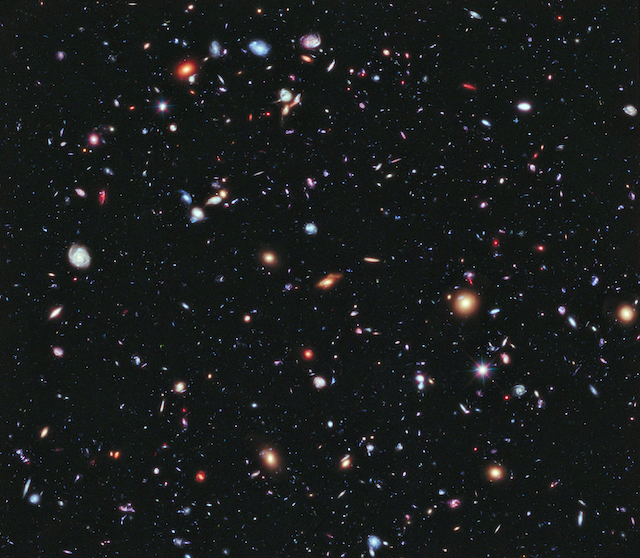 Instant Universe also could have application for Star Trek Adventures or other space-faring games that do not have any system generation rules. Some of the peculiarities seem particularly useful for Star Trek games.

Instant Universe is 56 pages. Compact tables and composition keep this page count low but also useable. Using this book you can quickly create a — well — universe in which to roleplay many hours of discovery along with supplementing your favorite science fiction game’s generators.

Patrick Kanouse encountered Traveller and Star Frontiers in the early 1980s, which he then subjected his brother to many games of. Outside of RPGs, he is a fiction writer, avid tabletop roleplaying game master, and new convert to war gaming. His last post for Black Gate was The Continuing Mission: Star Trek Adventures. You can follow him and his brother at Two Brothers Gaming as they play any number of RPGs. Twitter: @patrickkanouse. Facebook: Two Brothers Gaming