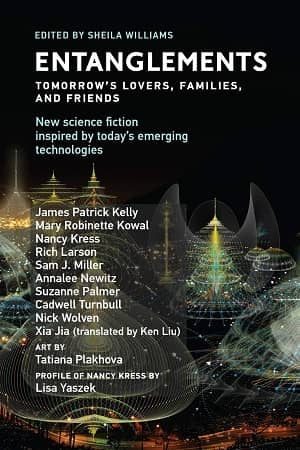 “Entanglement,” one of the more fascinating concepts underpinning quantum theory, tells us that particles may be inextricably linked — never truly behaving independently, no matter how far apart they are. It’s a powerful idea that, of course, has powerful parallels in the non-quantum world of human relationships, which makes it irresistible to science fiction writers.

The world-building in this compilation is frequently full and often insidiously terrifying, particularly in those stories that use the familiar as breadcrumbs to lure the reader in. The very first tale, “Invisible People” by Nancy Kress, begins with a mundane morning routine and carefully layers in a story about two parents reeling from an unsanctioned genetic experiment on their child. In “Don’t Mind Me,” Suzanne Palmer uses the shuffle between high school classes as a foundation on which to build a story about how one generation uses technology to enshrine its biases and inflict them on the next…. It is chilling how entirely possible many of the fictional futures seem….

This volume balances darker-themed stories with those in which technology and people collide in uplifting and charming ways. In Mary Robinette Kowal’s “A Little Wisdom,” for example, a museum curator, aided by her robotic therapy dog–cum–medical provider, finds the courage within herself to inspire courage in others and save the day. Meanwhile, in Cadwell Turnbull’s “Mediation,” a scientist reeling from a terrible loss finally accepts her personal AI’s assistance to start the healing process. And in arguably the cheekiest tale in this compilation, “The Monogamy Hormone,” Annalee Newitz tells of a woman who ingests synthetic vole hormones to choose between two lovers, delivering a classic tale of relationship woes with a bioengineered twist…

The 10 very different thought experiments presented in this volume make for a fun ride, revealing that human relationships will continue to be as complicated and affirming in the future as they are today. I would recommend the Netflix approach to this highly readable collection: Binge it in one go, preferably with a friend.

Introduction by Sheila Williams
“Invisible People” by Nancy Kress
Profile: Nancy Kress by Lisa Yaszek
An interview with Nancy Kress, by Lisa Yaszek
“Echo the Echo” by Rich Larson
“Sparklybits” by Nick Wolven
“A Little Wisdom” by Mary Robinette Kowal
“Your Boyfriend Experience” by James Patrick Kelly
“Meditation” by Cadwell Turnbull
“The Nation of the Sick” by Sam J. Miller
“Don’t Mind Me” by Suzanne Palmer
“The Monogamy Hormone” by Annalee Newitz
“The Monk of Lingyin Temple” by Xia Jia
Contributors

See all of our recent New Releases here.

I just ordered that from Amazon earlier today.

I have all of the Twelve Tomorrow’s going back to 2011.

I hadn’t realized there were that many! Are they published every year?

Sometimes yearly some times every other year:

The 2013 issue is my favourite but I am a big Richard Powers Fan.

Another reason I think I like them so much is they remind me of my Dad’s collection of Analog Science Fiction/Science fact from the 1960’s when they were published in a tabloid format.