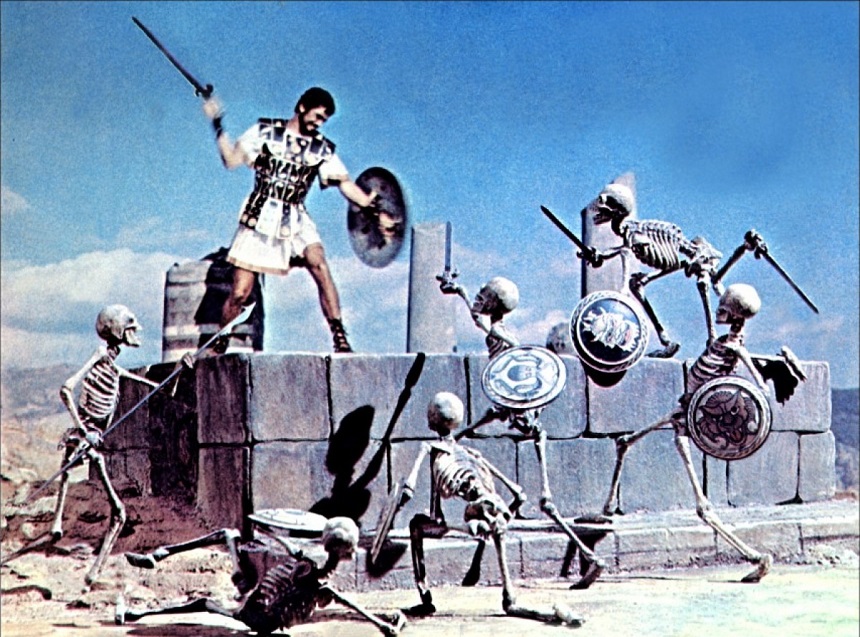 Just another day living with COVID

When is this going to end? Will it ever truly be over? I certainly don’t know and I don’t know of anyone who does. Neither can I claim that I was prepared when the COVID era suddenly leaped out of the ground and threw itself at our throats like Ray Harryhausen’s murderous skeletons in Jason and the Argonauts, though I do like to think that we science fiction readers were taken just a little less by surprise than most folks were.

Before this happened, we’d at least spent time (in the literary sense) with people who have foreseen disasters like the one we’re living through. Perhaps no theme is more common to the genre, and any science fiction fan worth his or her salt has whole shelves full of books that describe the human race wrestling with apocalyptic attacks that come out of nowhere and change everything. (I know you were hoping the science fiction that would be realized during your lifetime would be contact with a benevolent alien civilization or antigravity cars or an endless power supply that you could carry in your pocket, not this. Me too.)

Maybe that’s why the opening of H.G. Wells’s great book (and the granddaddy of all such end-of-the-world nightmares), The War of the Worlds, has been much on my mind lately. 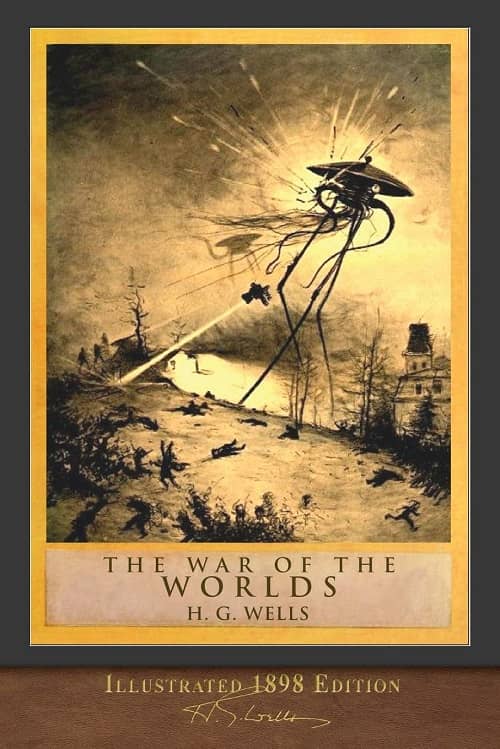 The War of the Worlds 1898 Edition

As every lover of science fiction knows, the novel begins with one of the most chilling passages in English literature:

No one would have believed in the last years of the nineteenth century that this world was being watched keenly and closely by intelligences greater than man’s and yet as mortal as his own; that as men busied themselves about their various concerns they were scrutinised and studied, perhaps almost as narrowly as a man with a microscope might scrutinise the transient creatures that swarm and multiply in a drop of water. With infinite complacency men went to and fro over this globe about their little affairs, serene in their assurance of their empire over matter. It is possible that the infusoria under the microscope do the same. No one gave a thought to the older worlds of space as sources of human danger, or thought of them only to dismiss the idea of life upon them as impossible or improbable. It is curious to recall some of the mental habits of those departed days. At most terrestrial men fancied there might be other men upon Mars, perhaps inferior to themselves and ready to welcome a missionary enterprise. Yet across the gulf of space, minds that are to our minds as ours are to those of the beasts that perish, intellects vast and cool and unsympathetic, regarded this earth with envious eyes, and slowly and surely drew their plans against us. And early in the twentieth century came the great disillusionment.

We are not beset by Martians, of course; we haven’t been laid low by “intelligences greater than man’s.” Quite the opposite. Where Wells imagined the world being attacked from above, we’re being attacked from below, as it were, which is – or should be – even more humbling, but aside from that there’s not a lot of difference. Wells has often been called a prophet, and he was never more prophetic than he was here, in his vision of human arrogance and pride laid low, in his awareness of how our refusal to acknowledge the precariousness of our position fatally endangers us. That restrained and deadly sentence, “with infinite complacency men went to and fro over this globe about their little affairs, serene in their assurance of their empire over matter” sums it all up, doesn’t it? 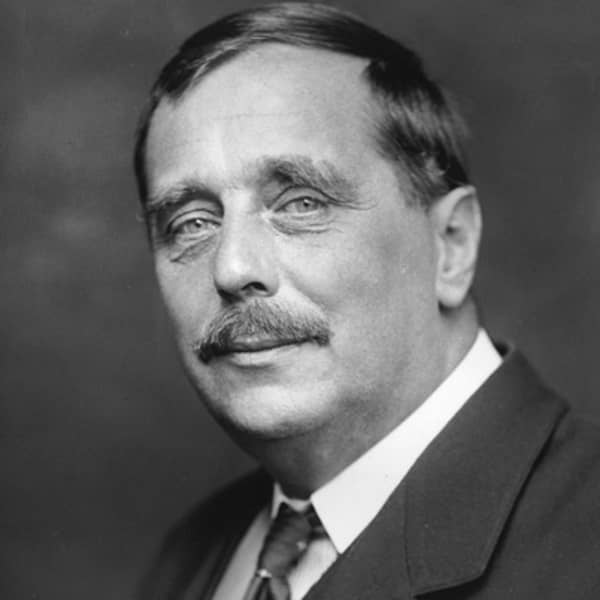 How serene and complacent we all were, as winter was ending and we were looking forward to the freedom of spring. Especially nice is the irony, which Wells no doubt would have appreciated, that whereas he contrived to have his Martian invaders defeated by a contagious sickness transmitted by “the humblest things that God, in his wisdom, has put upon this earth” those microscopic conquerors are the very things that have thrown our technological civilization into such chaos, and that may yet bring about our own “great disillusionment.” Five or ten or twenty years from now, it will surely be “curious to recall some of the mental habits of those departed days”, days that can still be seen on the calendars that we optimistically hung up on January first, days that we thought would last forever. 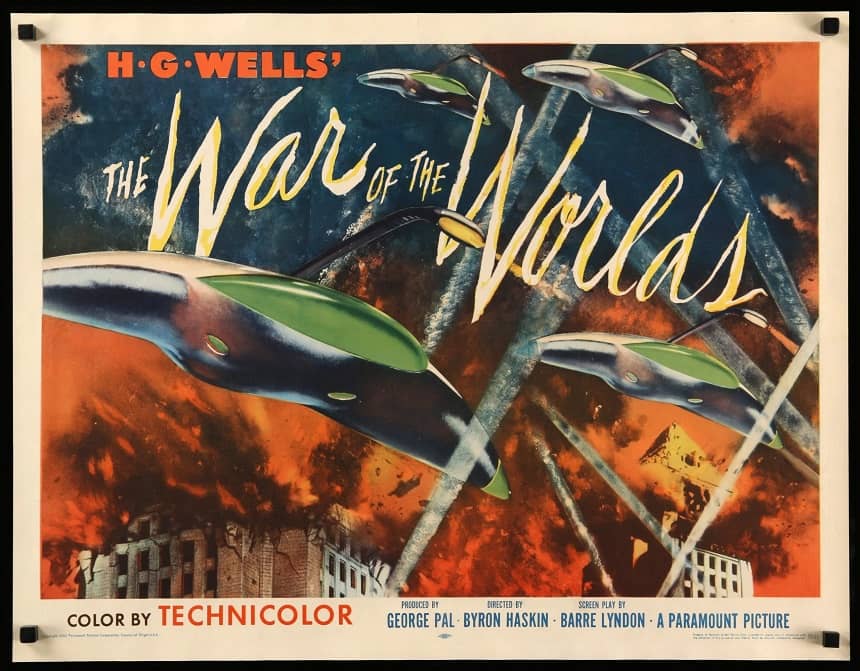 If nothing else, it’s one more argument for reading old books, especially science fiction – and you’ll never have a better opportunity, especially since we really don’t know when this is going to end…

Thomas Parker is a native Southern Californian and a lifelong science fiction, fantasy, and mystery fan. When not corrupting the next generation as a fourth grade teacher, he collects Roger Corman movies, Silver Age comic books, Ace doubles, and despairing looks from his wife. His last article for us was Jetpacks and Bazookas: Jonny Quest.

Well, ever since the 00s I had a saying “Don’t reality TRUMP fiction!?” That was before, ahem… I could go on all day about how we are living in a world of “Bad Science fiction” how if we somehow had a time machine and could start writing that novel or story years in advance could ‘make up’ stuff that would actually happen. The problem is, way before Men in Black sent by Lizard People came to get you you you’d die (in non-publishable obscurity) because what you’d write that really happened did NOT make it as sci-fi. I could imagine 9/11 as arguments with publishers on how they got a NUKE on the plane, whoops didn’t you know the Empire State building got hit with a comparable commercial plane…etc.

There was a book – “Random acts of Senseless Violence” by Jack Womack – showing 90% what’s happening now. The critics bit heads off rattlesnakes to spit venom on the page – almost literally. Their biggest weasel statment to try to get people not to even touch the book was “The macGuffin (crude plot driver) is that the girl’s father writes scripts for movies but studios are too scared in Great Depression 2.0 they don’t dare make movies anymore. They just re-release movies to fanfare or put entire weeks/months of tv on new high tech media so people can pretend its decades earlier…” Fast forward and DVDs made it so any show, not just rare hyper popular ones (Star Trek) could have a “Season archive”. But the thing is, they don’t just re-release movies again and again, fearing loss – G-d help the studio that makes something NEW that doesn’t perform, though a “Meh” to a re-re-re make seems acceptable… But that girl’s Dad in RL is clearly fired how vapid and dry they are. Unlike the book they pay BIG money to re-make them again and again and again… Like the “Definition of Insanity” the public is increasingly uncaring and apathetic, the core fans are enraged, but they keep doing it.

It’s actually really simple; Fiction “owes” you. There has to be some kind of resonance in the work no matter how wild, fantastic, bright and shiny or grim and dark – it has to ‘make sense’ or the publisher doesn’t buy it or even direct digital self-publishing the reader hates it and puts it down. And that’s the challenge of the writer – how to make a story that people want to read to get their message across and maybe make some $. Real Life owes us SH-t or not even that. For bonus points; What does work in tech what works in stories and vice versa. I like how HG Wells essentially predicted NETFLIX (Streaming online accessible media) in his “The Sleeper Awakens” book – but it was bashed way back for being too fantastic unlike the more grounded (aka “Hard Sci-Fi”) of Verne and a vehicle for his Socialistic ideals as if it could lead to mass world revolutions… And for decades we’ve had the media’s “Zombie Lie” of “Science fiction never predicted the Internet…oh, Cyberpunk don’t count coz it was written when it was coming true…” – Uh, Wells’s vision – then Brunner’s “The Shockwave Rider”…? Just Buck Rogers battling with Ming the Merciless sells a lot better than two pimply teens pretending to be Luscious pretty Elves in World of ZorkKraft…