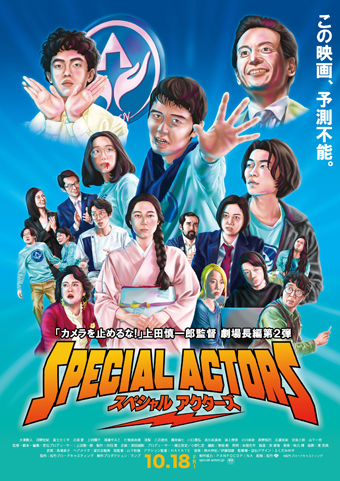 My first scheduled film at Fantasia 2020 was Special Actors (Supesharu Akutâzu, スペシャルアクターズ), written and directed by Shinichiro Ueda. I loved Ueda’s previous film, 2018’s One Cut of the Dead (Kamera wo tomeruna!, カメラを止めるな！), and this is his first solo feature since; he co-directed 2019’s Aesop’s Game (Isoppu no Omou Tsubo, イソップの思うツボ), and this year posted a special short film follow-up to One Cut on YouTube. Special Actors turned out to be very different from One Cut while still dealing with themes of storytelling and acting and family — and doing something as structurally surprising as One Cut in a completely different way.

Kazuto (Kazuto Osawa) is a failing actor with a medical condition that causes him to faint when nervous; a lucky encounter with his brother Hiroki (Hiroki Kono), who he hasn’t seen for years, leads him to join Hiroki’s acting company, Special Actors. Rather than perform onstage, the Special Actors play roles in real life: they can be hired as extra mourners at a funeral, or to sit in the audience at the premier of a comic movie and laugh wildly. They will also do more elaborate things, like stage a fight with a guy so he can look tough in front of a girl he wants to impress, or pretend to be the new lover of a woman trying to break up with her abusive boyfriend.

In other words, the Special Actors stage scenarios to help people live their lives. They’re a troupe of weirdos complete with acting coach and scriptwriter, and despite his self-doubts Kazuto fits right in. Then a young woman, Miyu (Yumi Ogawa), comes to the Actors with a tricky request: her sister has joined a cult, who are working on getting her to turn over the family inn. Can the Special Actors expose the cult’s lies and save the inn?

The answer to that question of course involves a series of wild schemes, and schemes inside schemes. Yet this movie avoids frantic zaniness in favour of a constant but relaxed pace. There’s some mugging, but nothing extreme. Jokes come quickly, and build to appropriately chaotic scenes; still, as a whole the film’s anything but manic. There’s a kind of humanity to it that counterbalances the contrivances of the plot and its various twists and contortions.

It helps that the movie’s got a strong sense of the themes it’s working with. There’s an immediate coherence to having the Special Actors, who tell different stories in order to help people, working against a cult who tells a single story in order to exploit people. A twist to the ending complicates this tension, but not that much. In fact, without wanting to spoil the twist, it points up the theme of family that runs through the film and encourages us to look at all the stories the Special Actors tell bearing that in mind. 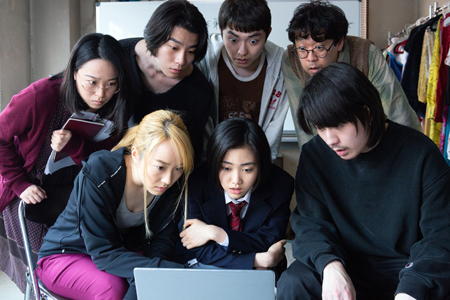 Which is to say the twist works because it brings into focus the film’s themes. What could have been mean-spirited instead shows a human generosity, a desire to help. We’re left with a reminder that storytelling can be an act of love.

In any event the movie’s far more than its final plot point. It’s an entertaining and amusing story about a series of con jobs, and it uses our awareness of the tropes of con-artist films in clever ways. It reminds us that running a con means wrapping unsuspecting people up inside a story. Exposing the con is interrupting the story; but then, part of a long con might be appearing to expose it as part of a bigger story. So it is here, and Ueda effortlessly balances the tensions between what the audience knows and what the various players know.

Crucially, the characters are engaging. Each member of the troupe is sketched in quickly and effectively; they’re fun to watch, fun to spend time with. They have the feel of, say, the cast of a particularly fun TV show, one of those shows about a gang of misfits with broad but individual personalities who use their gifts for good on a weekly basis — and if a show about these guys existed, I’d watch it. (I’m reluctant to comment much on the look of the movie because I realised after it was over that a mismatch between my computer and my TV had cut off a tiny fraction of the picture edges — this streaming festival’s a learning experience for everyone — but I note that it has the flat, bright lighting I associate with TV shows more than movies.) 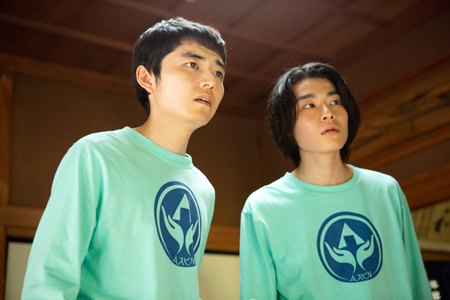 At the centre of the film, Kazuto’s blankness has a despairing edge that makes you genuinely worried for him. He’s hapless without being clueless, and it’s notable that while his fainting is used as a plot complication, he isn’t really mocked for it. In fact his anxiety’s used cleverly: he has a squeeze-ball, which he thinks of as a breast-substitute, that works as an objective correlative and brings out his sense of stress. Conversely, there’s something touching in watching him at his least-stressed moment, in his small womb-like apartment watching a VHS tape with a dubbed episode of an American superhero TV show called Rescueman.

That show turns out to be from his childhood, and the story of the show echoes his reality, and the theme of rescue becomes prominent as the film goes on. Nothing’s wasted in this movie. Everything rhymes. Art is not just an escape, but a rescue.

“All acting’s a lie, but you gotta lie like you mean it,” an abusive director tells Kazuto at the start of the film, and the story proceeds from there. To me Special Actors comes to question the idea of art as a lie; as Philip Sidney said, “for the poet, he nothing affirmeth” — the artist does not make a claim about what’s true in this world, but creates a world of their own and tells us about that. Special Actors shows us a group of artists creating a world, and cleverly collapses those worlds in ways that let us appreciate them. It’s a lovely film, intelligent, kind, and rewarding.