The year 2020 will always be associated in my mind with the Warrior Soul album Drugs, God and the New Republic. Explaining why requires a little back story, but let me assure you that this is the most relevant album in 2020.

In 1991 when the album came out, I was a senior in high school. While not in school, my friends and I spent many hours throwing dice on the table, role-playing different characters in a variety of different settings. One of the games we played a lot that year was Cyberpunk 2020, a dystopian future game set in the year 2020.

One of the futuristic details of Cyberpunk 2020 is a genre of music called “chrome rock”. As far as I know, chrome rock is never really described in any detail, so I have no idea what Mike Pondsmith and the other writers of the game intended it to sound like. I always imagined it to be lyrically very anti-authoritarian like a lot of punk songs, but musically more like metal and very “shiny” (clean and well-produced, I suppose?) like, well… chrome.

And that’s the perfect description of Drugs, God and the New Republic if you ask me. I heard the album and thought, “Holy f**k. This is chrome rock.” The sound seemed way ahead of its time back then, and I’ve never really heard anything quite like it before or since (except Warrior Soul’s debut album Last Decade Dead Century, but for some reason I didn’t pick that one up until years later). It’s got guitar riffs and drum smashes that would be at home in metal, bass grooves that might not be too out of place in funk, vocals that are more of the gritty hard rock G’n’R style, and lyrics born from a wholehearted punk attitude. Though Warrior Soul was generally considered “metal” at the time, they never neatly fit into that genre. That and the fact that grunge was just becoming huge when the album came out are the main reasons they never received the recognition and praise I think they deserve.

Sadly, I don’t know enough about the specifics of music recording to articulate exactly how their sound was created. Maybe someone more knowledgeable about sound equipment and mixing can tell me what pedals and filters might have been used to make it so unique.

The lyrics are even more relevant today than they were in 1991. All the disgusting aspects of government, religion, and corporate America that vocalist/songwriter Kory Clarke brings to the forefront of the songs have only become worse in the last 29 years. But many of the songs also have notes of heroism and hope in them, looking forward to a (not too distant?) time in the future when we’ve made everything better. Some of the songs focus on the ills of the world, like “Jump for Joy” and “The Wasteland”. Others like “Hero” and “My Time” are about individuals throwing off whatever chains hold them and finally standing up for themselves and others. The song “Children of the Winter” feels like it was written with the Millennial/Boomer divide in mind:

It’s a powerful song to end a powerful album. If you can listen to Drugs, God and the New Republic without feeling like a heroic rebel, you’ve got no soul. So join me in 2020 doing what Johnny Silverhand would want us to do: fight authority and make the world a better place for everyone. 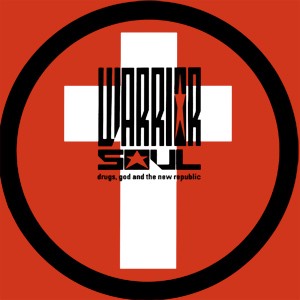 Drugs, God and the New Republic

I had not heard of Warrior Soul before…and man, I wish I had. Yes, this is chrome rock! Thank you!

You’re welcome! They’re a criminally underrated band, IMO. Glad you like them!

Thank you Dieter, for such a magnificent information

Well, I’m a fan of cyberpunk – I got that way the old fashioned way, by reading Neuromancer in the’80s and playing various cyberpunk RPGs, some just run with house rules using Hero Games systems.
Gotta report that I have no soul. What I have instead is an appreciation of totally different music to accompany my cyberpunk. For me, it always branched out from the score to Bladerunner…

@thingmaker: That’s fair. Certainly not all cyberpunk is the same, so there’s room for different sorts of music. I wouldn’t use Warrior Soul for a Blade Runner-esque game, but it was perfect for the sort of rebellious anti-authority sort of game I played as a teen. 🙂