My 3,000-word article on The Art of Author Branding: The Paperback Robert Silverberg last week required a lot of research and reading, and all that generated a nostalgic interest in Silverberg. So this week I’ve been digging into his recent collections, and that led me to the pleasant discovery that Three Rooms Press has been issuing a brand new Silverberg collection each year for the past three years, beginning with First-Person Singularities, which gathers tales written in the first person, and Time and Time Again: Sixteen Trips in Time (which is currently available at half-price on Amazon, just $7.99 in trade paperback).

The most recent is Alien Archives: Eighteen Stories of Extraterrestrial Encounters, a generous collection of stories from 1954-1997. Booklist gave it a warm review:

The latest in a series of Silverberg’s collections from Three Rooms Press focuses on stories about alien–human encounters, ranging from the deadly to the benign. Multiple stories involve intimate inter-species contact, such as the Majipoor story “The Soul-Painter and the Shapeshifter,” about a romance between a psychic painter and a shapeshifting alien, and “Bride 91,” which depicts a future in which dozens of species participate in inter-species marriage contracts, but one alien bride desperately wants an authentic Terran marriage. There are also stories of aliens lost on earth such as “Amanda and the Alien,” in which a body-stealing alien falls prey to the interests of a bored California teenager, and “Something Wild Is Loose,” in which an invisible and good-natured alien telepath can only communicate with sleeping humans, accidentally giving them lethal nightmares… Alien Archives still shows that Silverberg’s reputation as a skilled storyteller is well-deserved; it is still worth a look for those interested in a sampling of the SF Grandmaster’s prolific short story work.

I was torn whether to quote from Booklist or Publishers Weekly, since they manage to praise completely different stories. So I decided to go with both. Here’s an excerpt from the PW review.

Reaching back to the beginning of his career, SFWA Grand Master Silverberg collects 18 stories featuring alien encounters, some fond and some fearful. From the light humor of a flight attendant dealing with a group of aliens and their complaints (“En Route to Earth”) to the psychodrama of an abused child using his anger with his father to strike a blow against the entities who rule a conquered Earth (“Beauty in the Night”), Silverberg delves into the human heart as revealed by alien eyes. The discoveries are sometimes left to the reader, as when a biologist of Native American ancestry struggles to decide whether his mission is to study or to exterminate a herd of alien grazers (“Sundance”). Perhaps most revealing for longtime fans are the forewords that detail Silverberg’s dealings (courteous and/or contentious) with other famous SF writers and editors such as Harlan Ellison and Frederik Pohl, along with glimpses of the era when stories were commissioned for previously purchased magazine cover illustrations. Silverberg fans and readers interested in the history of SF will find this worthwhile.

We discussed First-Person Singularities right here back when it was first released, but I’m including it here for completeness. It contains Silverberg’s Hugo and Nebula-nominated novella “The Secret Sharer,” from Asimov’s SF, which won the Locus Award, as well as his Hugo and Locus Award nominee “Our Lady of the Sauropods,” from Omni magazine. Here’s the complete Table of Contents.

Back cover for Time and Time Again

Time and Time Again: Sixteen Trips in Time contains three big novellas: the Nebula nominee “Homefaring,” from Amazing; the Nebula Award-winner “Sailing to Byzantium,” from Asimov’s SF, and his famous tale “Hawksbill Station,” nominated for both a Hugo and a Nebula, which was eventually expanded into a novel with the same name.

There’s something to be said for the claim that the novella was Silverberg natural format. Here’s the complete TOC.

Alien Archives: Eighteen Stories of Extraterrestrial Encounters may be my favorite of these anthologies, just for the alien theme alone. It contains the Hugo Award nominee “Schwartz Between the Galaxies,” originally published in Judy-Lynn del Rey’s 1974 anthology Stellar 1, as well as “Flies,” Silverberg’s contribution to Harlan Ellison’s famed anthology Dangerous Visions, and “Amanda and the Alien,” from Omni. Here’s the complete TOC.

Here’s the complete publishing details for all three books.

See all our recent coverage of Robert Silverberg here.

What impressed me most about Alien Archives is how Mr. Silverberg has not lost any ground in his writing, with his latest stories all reading very contemporary and not “retro” in the least.

And, yes, the story notes themselves are worth the price of the book, as one of my “old school” fan friends raved about them.

An interesting bit of trivia that I’ve noticed is that all three collections which have appeared so far from Three Rooms Press are composed entirely of stories that were in Silverberg’s Collected Stories series from Subterranean. There are no rarities or outliers. So I’m wondering if the Three Rooms issues amount to a repackage, and if they will continue until all the Collected Stories have been reissued in new clothes?

If so, I’m all for it. I’ve been buying these new books, and I love the introductions and the fact that they mix up stories from completely different eras of the author’s career.

> And, yes, the story notes themselves are worth the price of the book, as one of my “old school” fan friends raved about them.

I agree completely. I really enjoyed Silverberg’s intro to Time and Time Again, in which he credits H.G. Wells, Lovecraft, John Taine, and Robert A. Heinlein for his fascination with time travel (in fact, he dedicates the book to those four men).

He singles out several stories in particular, including Lovecraft’s “The Shadow Out of Time,” saying:

“As the story develops, Lovecraft unfolded visions of remote time and provided exactly what I was looking for in science fiction: A gateway out of the here-and-now world into the unknown and unknowable.”

Here’s the next few paragraphs: 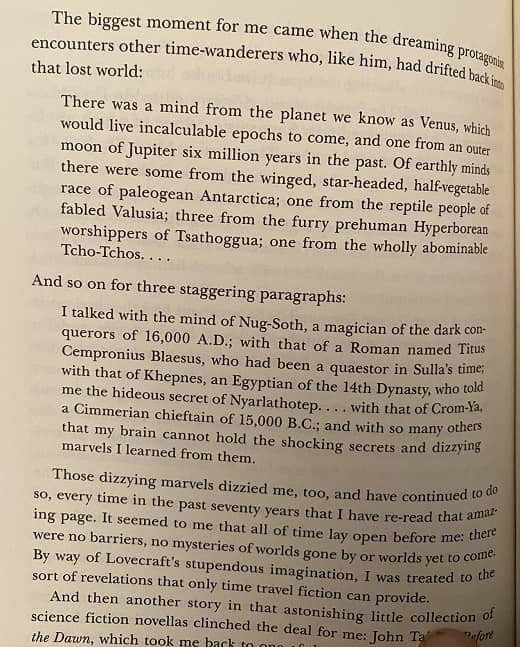 This is the kind of introduction I most enjoy — one that gets me out of my chair and has me grabbing another book (in this case, Great Tales of Terror and the Supernatural, which contains “The Shadow Out of Time,” and makes me glad I have a home library. 🙂

> all three collections which have appeared so far from Three Rooms Press are composed
> entirely of stories that were in Silverberg’s Collected Stories series from Subterranean.

Nice catch! I hadn’t made that connection (probably because I don’t have the Subterranean volumes… but I wish I did!)

There are nine volumes in the Subterranean Collected Robert Silverberg, covering 1953-2009, so there’s a lot of short fiction to repackage. 🙂

The introductions appear to be original to the Three Rooms Press editions. Anyone know if the story notes are original to these books as well, or are they reprinted from the Subterranean volumes?