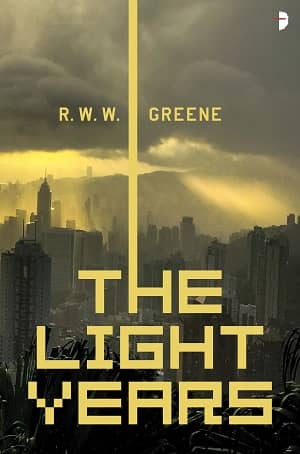 Welcome to February, a month absolutely packed with new releases. There’s lots to keep your eyeballs busy but, no big surprise, I find my eyes are drawn to the debuts.

R.W.W. Greene, whose fiction has appeared at Stupefying Stories and Daily Science Fiction, releases his first novel The Light Years next week, and in a cover reveal/interview at SciFiNow, he talked about how he was inspired to write book after attending Boskone (and the story story it grew from, “Love in the Time of Light Speed,” originally published at NewMyths.com).

This book is an unusual blend of ideas — relativity, refugees, devolution, folk music, and arranged marriages. Where did they all come from?

R. W. W. Greene: The Light Years revealed itself as a short story first (‘Love In The Time Of Light Speed’). We’d just gotten home from the 2014 Boskone (an annual sci-fi convention in Boston), and I was buzzing from all the panels and conversations and thinking about the week of classes ahead. At the time I was teaching at a really diverse high school and I had all these kids – Indian kids, Hispanic kids, gay kids, trans kids, kids from the Middle East – and their lives stomping around in my brain… The story downloaded into my head while I showered off the convention. As soon as I turned the water off, I grabbed a towel and hit the writing room. About a year after that I started expanding the thing into a novel.

The Light Years is already accumulating good notices, including this great review at Publishers Weekly.

The toll difficult moral choices take on families is the core conflict of this clever far-future debut from Greene. In the 33rd century, wealthy Traders travel space while the poor struggle to survive planetside. Trader Adem Sadiq enters an arranged marriage with faster than light worm-drive technology expert Hisako Saski at the urging of his mother, Maneera. Hisako’s parents agree to the marriage contract that gives Hisako money in exchange for studying supposedly obsolete worm-drive technology… Sophisticated worldbuilding and diverse, emotionally-resonant characters make Greene an author to watch.

The captain of a family-owned starship arranges a marriage for her son in hopes of achieving faster-than-light travel and maybe, just maybe, marital bliss.

Before Hisako Saski is even born, her parents make a deal on her behalf. In exchange for a first-class education and a boost out of poverty, Hisako will marry Adem Sadiq, a maintenance engineer and self-styled musician who works the trade lanes aboard his family’s sub-light starship, the Hajj.

Hisako is not happy when she finds out about the plan. She has little interest in the broken branch of physics the deal requires her to study, and is not keen on the idea of giving up her home and everything she knows to marry a stranger.

Sparks fly when Adem and Hisako meet, but their personal issues are overshadowed by the discovery of long-held secrets and a chance at faster-than-light travel.

The Light Years will be published by Angry Robot on February 11, 2020. It is 400 pages, priced at $14.99 in trade paperback and $8.99 in digital formats. The cover uncredited (even in the cover reveal, which has to be frustrating for the poor artist!)

Get the details at the Angry Robot website, and read an excerpt at Issuu.

See all of our coverage of the best in upcoming science fiction and fantasy here.