Author C L Werner is one of a number of authors to provide an essay for publisher Rogue Blades Foundation‘s release later this year of the book Robert E. Howard Changed My Life. Below Werner writes of Howard and the influence of sword and sorcery literature.

I have a curious relationship as regards sword and sorcery, because for me this tribe of fantasy fiction was encountered only after spending my formative years with what would be termed “high fantasy” in modern parlance. The Tolkien epics, the Arthurian sagas, and a good deal of Dungeons & Dragons during its heyday in the mid to late 1980’s when there was an emphasis on a grand scale for narratives, as demonstrated by the Dragonlance novels. I didn’t really get a proper introduction to sword and sorcery until much later, after moving to Arizona in 1993. That was when I first read the actual stories (or at least the Lin Carter/L. Sprauge deCamp revisions of them) of Robert E. Howard and his creations Conan the Cimmerian, Solomon Kane, and Kull of Atlantis.

Now I’d had a peripheral awareness of Robert E. Howard’s characters before, through comic books and the Conan movies (and that really cool stunt show Universal Studios had back in the 1980s), but my belated discovery of the actual stories really had a profound effect on me. While I did enjoy The Lord of the Rings and The Hobbit, I was always off-put by The Silmarillion and became jaded on many versions of the Arthurian tales. My investment in Dragonlance also waned over time, and I think the culprit can be found in an inability to be engaged by protagonists who are so far beyond relatability. Elf lords who can single-handedly cross swords with a balrog or wizards who can one-shot a dragon become, sadly, not as engaging as a character who has limitations to what they can do and how they can do it. In Howard’s stories, Conan or Solomon Kane get knocked about by the bad guys, put through the ringer by the ordeals they face. Certainly these characters overcome incredible odds and mighty foes, but these triumphs always felt like they were earned rather than an inevitable, foregone result. The reader experiences the struggle to prevail alongside the hero and in a more visceral way than often can be found in narratives that are operating to some legendary scale of warring gods and unfolding prophecies.

There’s also the scale of a sword and sorcery narrative to be taken into account (and which is also often the first indicator that a pastiche isn’t really capturing the proper feel). A high fantasy story is enormous in its scope, often times, with the whole of its setting at stake. Whether that setting is Krynn or Arthurian Britain, the story that is being told has ramifications that threaten the world itself. Sword and sorcery draws the stakes down to a more immediate framework. Typically you’ll not have more than two warring kingdoms (among dozens in the setting) involved, more often it is something as intimate as an adventurer trying to sneak into a wizard’s lair to steal away some arcane relic in his possession. Because what the protagonist is striving to accomplish is scaled down in such a measure, it creates, I feel, a greater intimacy between reader and character. While I worried about Frodo sneaking across Mordor, I was actively invested in Conan’s exploits in the Tower of the Elephant. There’s a kind of everyman approach to sword and sorcery, where it isn’t some Chosen One who is the linchpin of destiny, but ordinary people with the courage to persevere against the odds (much as one hesitates to call Conan or Jirel of Joiry ordinary people) and create their own fortunes.

As I write this, I’ve authored over thirty novels, most of them fantasy of one stripe or another. I’d classify much of what I’ve written as belonging to the grittier breed of fantasy, sword and sorcery with a few of the trappings of high fantasy to season the pot. Warhammer Fantasy‘s Old World might have had elves and dwarfs, but it still lent itself to telling more grounded stories where a bounty hunter simply plying his gruesome trade could provide the foundation for a story and where the plight of the commoner was never hand-waved away as inconsequential in the divine clash of gods and prophecies. At its inception, the Mortal Realms of Age of Sigmar lost something by no longer lending itself to those kinds of stories, but as the setting has developed further there has become room to tell these more immediate tales. My newest novel in the setting, Castle of Blood, for instance, fixates entirely on a single castle and the doomed families that have been lured to it for a night of horror. 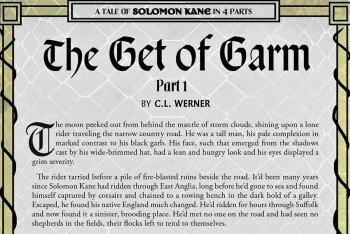 A magnificent opportunity for me arose this past year when Perilous Worlds asked me to write a story about none other than Howard’s Solomon Kane. A plot immediately suggested itself based upon the timeline of Kane’s life and a ghastly legend that would have been appropriate for him to run across both in terms of time and place. The result was “The Get of Garm,” which is appearing in four parts as a supporting text feature in Conan: Serpent War published by Marvel Comics. To be able to tell that story was an honor that I remain grateful to Perilous Worlds for making happen. Kane has inspired other characters who I’ve written, but to be able to explore the Puritan adventurer himself was a highlight of my career.

Beyond the sphere of other intellectual properties, I’ve found time to make my own efforts at furthering the reach of sword and sorcery fiction. A fascination for Japanese history and folklore led me to create the character Shintaro Oba in 2008 with his first story “The Rotten Bones Rattle” appearing the following year in Rage of the Behemoth published by Rogue Blades Entertainment. Oba is a samurai who wanders a fantastical land infested by monsters and ghosts seeking the demon that has enslaved the soul of his dead master. Much in the tradition of Zatoichi or Yojimbo, Oba finds trouble wherever he goes and does his best to help those beset by murderous fiends, be they natural or supernatural. To aid him in his battles, he carries the sword Koumakiri, the fearsome Demon-Killer of his vanquished clan.

Oba’s adventures have appeared in several anthologies over the years. “Bodyguard of the Dead,” which finds him protecting an undead priest from a vengeful oni, appeared in 2010’s Demons from Rogue Blades. “Feast of the Shark God” saw Oba trying to stop a grisly tradition of human sacrifice in a fishing village and was featured in 2015’s Sharkpunk from Snow Books. “Shini-tai” has Oba trying to protect a sumo wrestler from enemies mortal and demonic and appeared online in 2017 on Lyonesse from Silver Empire. “Devils from the Sea” has Oba joining forces with a crusading sohei to fight the fiendish power that is slaughtering entire villages and was featured in 2019’s Crosses and Crossbones published by Rogue Blades. You can look forward to more Oba in the near future with “The Witch’s Hound,” which should be appearing in the fourth issue of Tales from the Magician’s Skull published by Goodman Games and “A Season for Slaughter,” anticipated for an upcoming anthology from Rogue Blades. There’s also been some discussion about a collection of Shintaro Oba stories, which I hope would be of interest to those who enjoy a blending of old-fashioned fantasy with Japanese themes.

Perhaps in this day and age, grandiose high fantasy is where the money is, but for me, it is down in the murky catacombs and shadowy streets of sword and sorcery where the fun is to be had.

C L Werner has written more than twenty novels and even more short stories set in the Warhammer fantasy world, including the End Times novel Deathblade, the Witch Hunter and Brunner the Bounty Hunter trilogies, the Thanquol & Boneripper series, and The Black Plague trilogy. He has also written a number of stories set in Warhammer’s new Age of Sigmar setting, including the Realmgate Wars novel Lord of Undeath. His Warhammer 40,000 credits include the Space Marine Battles novel The Siege of Castellax, the audio drama Iron Devil and the novel Cult of the Warmason. He lives and works in the American south-west.

I really enjoyed your first two Shintaro Oba stories. I wasn’t aware you had published more stories with the character. I’ll be getting issues 4, 5, and 6 of Magicians Skull.

I’ll have to track down the others. I would love to see a collection eventually.

Fun really is the big troubling problem with contemporary fantasy. There is plenty of new material that is “good” on a number of qualities, but there seems to be very little that is both fun and sincere. When there is fun, the story rarely takes itself seriously.

My own introduction to fantasy started out by watching The Rankin-Bass adaptations of Tolkien’s work as a small child (Which I still believe hold up quite well.) This was followed up by the Conan films and Ridley Scott’s Legend around the age of 6 or 7; and there I was hooked.
The quote in the above article – “Perhaps in this day and age, grandiose high fantasy is where the money is, but for me, it is down in the murky catacombs and shadowy streets of sword and sorcery where the fun is to be had.” – definitely resonates with me. A great article!