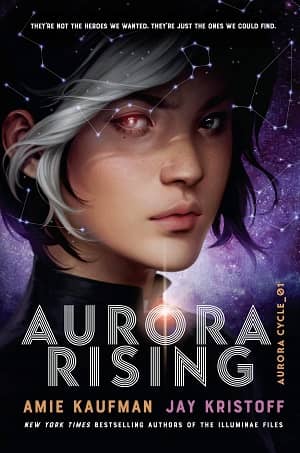 The spaceship disintegrates around Tyler, sagging and rupturing, giving way to the void. He’s going to die out here in hyperspace, taken out by one of its freak Foldstorms.

He isn’t supposed to be here. It’s the night before the Draft, and he should be sleeping, preparing to tap the team he wants. As the top-ranked Alpha in the League, he’s got the strongest draft picks of anyone.

But he couldn’t sleep. And then the distress call came in.

Everyone knows that the Hadfield colony ship was lost more than two hundred years ago. But somehow, impossibly, it shows up on radar. And according to the initial scan, it contains tens of thousands of corpses, but also a single heat signature…

Somewhere deep in the hold of the Hadfield, someone’s alive.

But a Foldstorm has churned up near the ship. If Tyler doesn’t act soon, even that last, impossible soul will be lost.

It’s stupid to head out into space alone. Tyler won’t really have graduated with his wings until the next day. But he begs his way onto a fighter and gets clearance to boost out.

It takes him too long to search the Hadfield and find the cryopod with the living occupant, so he’s still onboard when the Foldstorm hits. He drags the freezer out of its rack, pulls the human out, and tugs her through the maze of corridors while the metal writhes and black lightning arcs around him.

Something hits him, and his hydration hose dislodges, starting to fill his helmet with water. He can’t take the suit off – it’s hard vacuum out there. Is he going to drown in space?

Taking his last breath, he closes his nose as the liquid rises above it. He can see his fighter at the end of the hangar, but it’s too far away. His lungs burning, he staggers forward, dragging the girl, a second from passing out –

Suddenly, the fighter’s hatch appears under his hand, as though he’s been magically transported two hundred feet in an eyeblink.

Tyler manages to board his fighter with the survivor – a teenage girl with one streak of white hair growing in her black mane – and escape the derelict before the Foldstorm destroys it completely. But his wounds are such that he misses the Draft the next day. All the other Alphas were able to pick the desirable teammates. He’s now stuck with the League’s dregs. While all the other Alphas are given exciting assignments, his first mission is just a milk run.

Except that it turns into anything but.

So begins Aurora Rising by Amie Kaufman and Jay Kristoff, the New York Times bestselling authors of The Illuminae Files, previously reviewed on Black Gate here. While this novel features all new characters and a different universe from their previous books, it offers the same nonstop action, messy romantic relationships, sarcastic voice, and space operatics that will please longtime fans and win new ones. At the beginning, the prose is frenetic enough to be confusing, but readers will be rewarded for soldiering on. The perspective shifts between many different characters, and fun schematics interrupt the flow of text at intervals. The Hadfield’s survivor, Aurora, has a similar plot function to the weird psychic girl in the Firefly movie Serenity and looks like Anne McCaffrey’s famous female telepaths in The Rowan and Damia. There appears to be a cameo by the opera diva from The Fifth Element, as well as a scene set in the famous Star Wars bar.

Knopf Books for Young Readers published Aurora Rising on May 7, 2019, and the novel landed on the New York Times Young Adult Hardcover bestseller list for the week of May 26th. To read an excerpt, point your browser here. Be forewarned that this novel’s not a standalone. The ending pushes readers to the next tome of a series dubbed The Aurora Cycle. According to Amie Kaufman’s official author’s website, two more books are planned. No release dates have been announced.

I was eager to try this until I read, near the end of your review, that it was the first of three. Now I’ll wait until three is out, and if I remember, read it then.

I’ve got your back, R,K, Robinson. I’ll keep tabs on this series, and if it continues to entertain, I’ll post more reviews. 🙂