Weird Tales is unquestionably the most storied and respected American fantasy magazine. It first appeared in March 1923, and published its last issue in Spring 2014 — a nearly 91-year run. That’s impressive by any standard.

There have been numerous anthologies and collections gathering much of the best work from Weird Tales over the years. Most were produced by Arkham House, the publishing house founded in 1939 by August Derleth and Donald Wandrei to preserve the work of H.P. Lovecraft. Arkham mined Weird Tales for decades, issuing many hardcover volumes, and in the process preserved the work of many fine writers. Many of their reprints are now highly collectible on their own, which doesn’t help those of us looking for an inexpensive introduction to the glories of Weird Tales.

Fortunately for folks like you and me, there are a number of affordable and highly readable books out there that can do the job. Here’s a dozen to get you started.

Two of my favorite Weird Tales anthologies were edited by Peter Haining, the British author and anthologist. Weird Tales and More Weird Tales were published by Sphere in 1978, with moody and effective covers by Les Edwards. The first volume contains a Jules de Grandin novelette by Seabury Quinn, a Zothique tale by Clark Ashton Smith, an Elak story by Henry Kuttner, and more; the second includes fiction, poems, letters and essays by Fritz Leiber, Manly Wade Wellman, Eric Frank Russell, Ray Bradbury, Margaret St. Clair, Robert Bloch, and many others.

Here’s the Table of Contents for Weird Tales.

And here’s a look at the contents of More Weird Tales.

Like most vintage paperbacks, these aren’t particularly expensive, and you can find copies in good shape online for $10-$20 each. 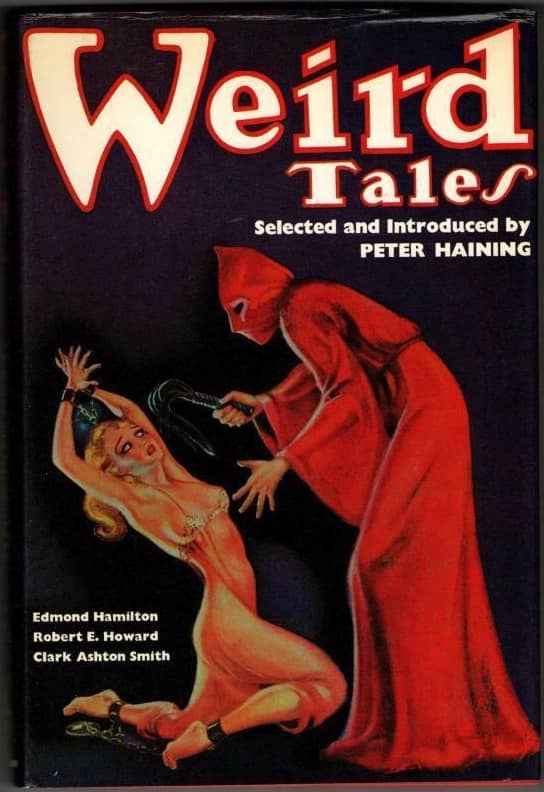 If your budget is a little more generous, you might want to spring for the original hardcover volume, published by Neville Spearman in 1976. This contains the complete contents of both paperbacks; unlike them, however, it’s a facsimile edition, with pages shot directly from the original pulps.

That means it contains all the original interior art by masters such as Virgil Finlay, Margaret Brundage, Hannes Bok, and Lee Brown Coye, and lesser known artists such as Harry Ferman, Frank Utpatel, Harold S. De Lay, John Giunta, A. R. Tilburne, Boris Dolgov, and others.

Copies of the Neville Spearman hardcover sell for $40-$50 on sites like eBay, substantially less than you might expect (well, less than I expected, anyway). I suspect the primary reason is that it was reprinted in 1990 by Xanadu (UK) and Carroll & Graff (US).

Just to make it clear that this version contains all that eye-popping artwork, it was retitled Weird Tales: A Facsimile Selection From the World’s Greatest Fantasy Magazine, which is quite the mouthful. This one sells for a few bucks less than the 1976 hardcover, and comes with that great Gahan Wilson back cover, which really makes it the prefered edition in my book.

Something a little on the pricier side (okay, a lot on the pricey side) are the Not at Night anthologies, published in the UK between 1925-1936 by Selwyn and Blount. They were edited by Christine Campbell Thomson, and were considered an unofficial U.K. edition of Weird Tales. The first two volumes were entirely devoted to Weird Tales reprints; later volumes were at least 50% fiction from the Unique Magazine. There were a total of eleven volumes of Not at Night.

The hardcover editions are very pricey, but if you’re lucky (luckier than me, say) you may be able to track down some of the Arrow paperbacks.

Not at Night Omnibus, edited by Christine Campbell Thomson (Selwyn and Blount, 1937)

A better option might be the 1937 Not at Night Omnibus, also from Selwyn and Blount. It collected 35 stories from the Not at Night series, including 20 which originally appeared in Weird Tales. This is still a tough find, but not impossible.

There’s also a US version of Not at Night!, published by Macy-Macius in 1928 and edited by Herbert Asbury. It included 25 stories from the series, all but one of which came from Weird Tales.

If you’re on a budget, two books that I recommend are:

Both are sizable anthologies published as instant-discount hardcovers by Barnes & Noble Books, with covers by Bob Eggleton. John Betancourt was the publisher and co-editor of Weird Tales during much of the Terminus/Wildside Press era (roughly 1988-2011); in 1995 he assembled an anthology collecting the best of the early Terminus years, Best of Weird Tales. Two years later he partnered with Bob Weinberg to produce a true retrospective anthology, Weird Tales: Seven Decades of Terror, which gathered fiction from the entire history of the magazine.

Both volumes are now out of print, but readily available in the aftermarket.

Both are highly readable, and a good value for the money. 32 Unearth Terrors is a little more expensive these days, but both are well worth tracking down.

This is by no means a comprehensive survey of Weird Tales anthologies, but I hope it’s enough to get you started. For more advanced collectors, Wikipedia devotes a lengthy section to anthologies in their Weird Tales entry, noting volumes from Leo Margulies, Mike Ashley, Marvin Kaye & John Betancourt, and others. Enjoy.

See all of our coverage of Weird Tales here.

That Marvin Kaye volume was one of my first SFBC selections! And I also acquired the Carrol & Graf Haining at some point or other.

[…] Gate has a new survey of “The Weird Tales Anthologies”. With covers and some tables of contents. It’s not comprehensive but lays out what you might […]

> That Marvin Kaye volume was one of my first SFBC selections!

I didn’t even realize it had been published by the Science Fiction Book Club until I was putting this article together. But at least I did recognize the story being illustrated — Robert E. Howard’s “Skulls in the Stars,” originally published in the January 1929 issue of Weird Tales.