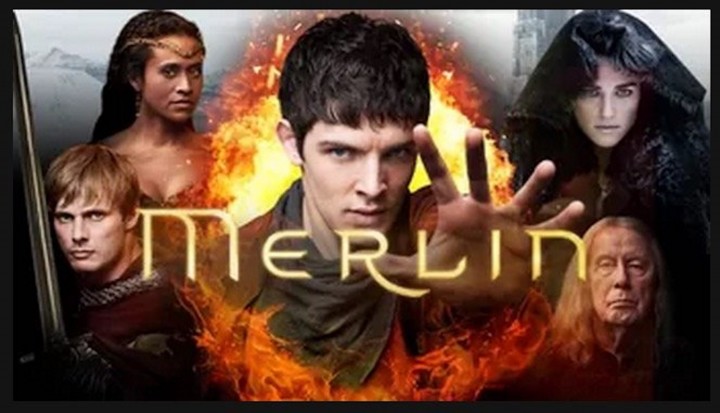 I’m ill today (currently accepting all the pity), and blogging from the couch, where I’m sitting with a hot cup of tea and binging Netflix. In fact, I’m binging an old show that is the equivalent of comfort food.

Look, this show is absolutely the goofiest thing you’ll ever watch. It’s also genuinely funny, dramatic, tear-jerking, and eye-rolling. In short, it’s that peculiar mix of drama and whimsy that the BBC excels at producing. It’s very much part of the British sensibility, I think, this mix of whimsy and drama… and terrible CGI. There’s just something about that mix, and the peculiarly Britishnes of the whole thing that is somehow a killing combination.

Since I’m watching it anyway, I figured I chat about the show, and how it both adheres to and breaks some of my favourite fantasy tropes.

Ordinarily in the Arthurian myth, not least of all the one most of us are familiar with (I won’t go into the historical basis for King Arthur, nor the earlier Welsh origins of the Arthurian mythic cycle) centres on Arthur; the young boy who did not know he was the rightful king of Britain.  You know, the whole sword in the stone thing. It’s one of the dullest tropes in fantasy, largely thanks to its overuse, of the young peasant child who is actually of noble blood, who rises to save the world (or at least his little part of it).

This show both adheres to and breaks this trope. In it, Prince Arthur begins his life as a prince, not some peasant ignorant of his true position. In fact, Prince Arthur begins life as an absolute, in the writer’s words, pratt. He is what most of us might imagine a bratty, pretty-boy private school kid might be. Still, Arthur grows to become a hero figure; his bratty self mellowing into a strong, dutiful, kind (emphasis on kind, here) young man. 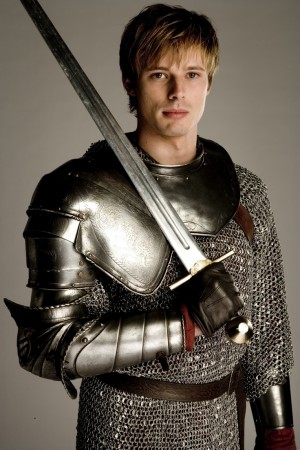 Arthur. I’m not normally one for blondes,
but put one in amor and give him a sword
and…well… it’s just my aesthetic.
Don’t judge me.

The farm hand who rises to the occasion, in this instance, is Merlin himself. Unlike Arthur who lives with his biological father, King Uther, Merlin does not know who his father is. Raised by his mother is a small town a little beyond the borders of the kingdom on Camelot, his magical prowess puts him into trouble. He is sent by his mother to Gaius, the king’s physician at Camelot for guidance and care, where he happens to acquire the job of Arthur’s servant. With help from Gaius, and the last of the dragons, Merlin grows to be the wizard who aids the young Prince Arthur; the hero hiding in the shadows, getting none of the credit, but nevertheless a hero. 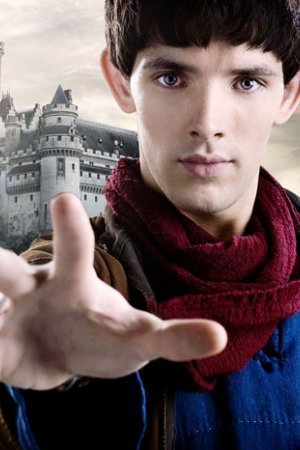 Merlin. The hero behind the hero.

Oh lordy, does the internet ever love this trope. The show revels in it. Arthur and Merlin’s relationship is much like a fantasy take on Jane Austin’s Pride and Prejudice. The pair start of hating each other in the typical, ‘rich boy is a tit’ kind of thing that was the problem with Mr. D’Arcy. Turns out that the prince is less of a tit than first surmised, and the pair grow quite close. Not Mr. D’arcy and Lizzy close, but it may as well be, let’s be honest. I’m fairly certain the writers knew full well what they were doing writing this particular relationship.

I was never very deep in the fandom of this show, but I’m sure the shippers loved these two together. Even I must admit how terribly cute this friendship is. 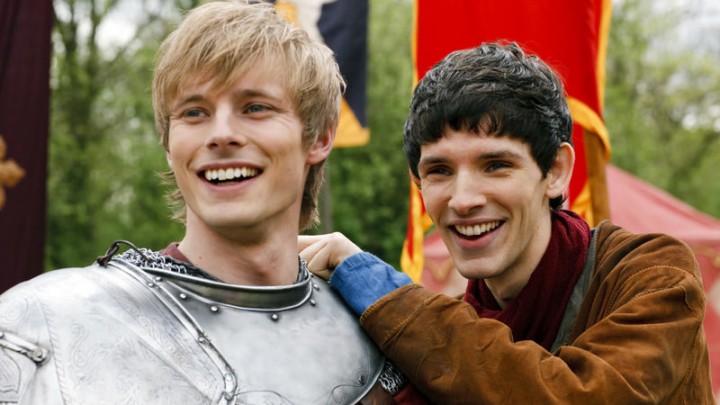 I adore the portrayal of strong, loving friendships, particularly between two men,
in anything I read or watch. Friendships can be as powerful as romantic relationships,
and I think more positive representation of that is absolutely necessary in stories.

There are more bromances in the series. No one who has watched it can deny Lancelot and Arthur’s connection, or Merlin and Gawain. This series doesn’t break this trope, and doesn’t care to. I respect that.

This is one of my favourite tropes, if done well. Merlin does it very well. Here, despite how cheesy this series is, the discussion of good and evil is surprisingly nuanced. In this world, magic is set up to be evil (meaning Merlin must keep his a secret, even though he uses his for good), and regular people fighting it the ‘good guys.’ Except that’s not completely true. Uther is portrayed as a tyrant, and a hypocrite of the worst kind – murdering people, even children, who dare use magic, but not hesitating to utilize it in an effort to save his own loved ones. Uther is complicated, but ultimately evil. He’s killed children, for crying out loud.

On the other side, Uther’s ward, who is also secretly his daughter, Morgana, is a sorceress. She beings as one of the good ones; kind, honest, and, utterly alone, afraid of her own powers. Uther’s hatred for magic, however, and the constant gas lighting (oh lordy, the gas lighting! No wonder she turned), turns Morgana against him and, by necessity, against those he cares for. It doesn’t help that Merlin is forced to poison her at one point. 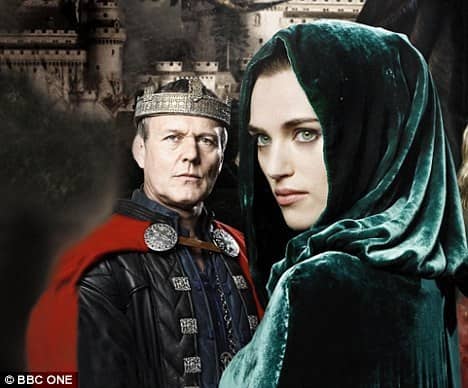 Uther and Morgana. Father and daughter, on opposite
sides of the fight, but both still on the side of evil. Neat.

Similarly, Merlin, a magician, and Arthur, a non-magic user bound by Uther’s laws, are technically in opposition to one another, and yet both on the side of good (even if Arthur is ignorant to his servant’s talents for most of the series).

The good and evil here is not magic vs. normal folk, but about a clash of actions, of intent. The deed maketh the man, in other words. In fantasy, the trope usually goes quite differently. Evil is a group of people; orcs or dark elves, for example, or something equally as (fantasy) racist. Here, it is not. Here, evil is in action (or not). It is hatred and deception, cruelty and ill-intent. This, rather than evil being a whole race or something, is something more fantasy stories need, I think.

Right, I’ve run out of room to go over all the other tropes. These are the main three in any case. What do you think? Have you seen the show? What do you think. Leave your thoughts in the comments.