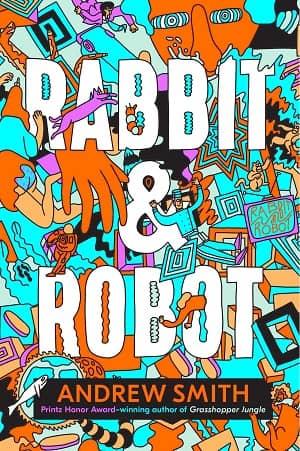 I’ve been on a prolonged space opera kick for the past few weeks, munching snacks while taking in epic sagas about cloned warriors, space battles, massive killer A.I’s, galaxy-spanning conflicts, fast ships, ancient tech, and more space battles. To tell the truth I probably would never have picked up Andrew Smith’s new novel if I hadn’t been looking for something very (very) different this weekend.

Andrew Smith is the author of The Marbury Lens (2012) and Grasshopper Jungle (2015). Rabbit & Robot tells the story of Cager Messer, a boy stranded on a massieve lunar-cruise ship with with insane robots, while a World War breaks out on the surface below. It’s about as uncommercial a novel as you’re likely to find. Here the description.

Cager has been transported to the Tennessee, a giant lunar-cruise ship orbiting the moon that his dad owns, by Billy and Rowan to help him shake his Woz addiction. Meanwhile, Earth, in the midst of thirty simultaneous wars, burns to ash beneath them. And as the robots on board become increasingly insane and cannibalistic, and the Earth becomes a toxic wasteland, the boys have to wonder if they’ll be stranded alone in space forever.

Booklist is quoted extensively every time I look this book up. So to save you time, here’s the a few lines from the Booklist review

Cager Messer and his best friend, Billy — both sons of wealthy industrialists—have stolen upon a luxury space cruiser along with Cager’s ever-faithful servant, Rowan. Aboard with them are “cogs” — humanlike android attendants programmed with unsettling, occasionally dangerous emotional instabilities. Then the latest (and last) in a long line of world wars breaks out on Earth below, and Cager and company believe that they’re the last humans in the universe. But before the true horror of that can set in, they must figure out how to defend themselves from the cogs, who have developed a penchant for robotic cannibalism… Those delving into Smith’s zany dystopia will find much to laugh and gasp at, including comedic and serious musings upon sex and violence. But most of all, they will find many deep, essential questions worth pondering.

Rabbit & Robot was published by Simon & Schuster Books for Young Readers on September 25, 2018. It is 438 pages, priced at $18.99 in hardcover and $10.99 for the digital edition. The cover is by Mike Perry. Read all our recent New Treasures here.