I’m enjoying being off work for two weeks over the holidays. This is one of the few times a year I can tackle some really ambitious reading projects.

But it’s also a marvelous time to get caught up on short fiction. It’s been a while since I’ve read an issue of Asimov’s Science Fiction cover-to-cover…. and over a year since I tried Analog at all. I picked up the latest double-sized issues at Barnes and Noble on Saturday, and the website descriptions for both sound enticing, with brand new stories by Robert Reed, Howard V. Hendrix, Edward M. Lerner, Adam-Troy Castro, Thoraiya Dyer, Mary Soon Lee, S. B. Divya, and others (in Analog), and Robert Reed, Lavie Tidhar, Suzanne Palmer, William F. Wu, Alexander Jablokov, Sandra McDonald, and many more (Asimov’s).

I was surprised to find stories from Robert Reed in both issues, and Leah Cypess credited in both summaries  — even though her Analog tale, “Parenting License,” doesn’t actually appear in the issue. C’est la vie. Here’s Asimov’s editor Sheila Williams on what’s actually in the January/February 2019 Asimov’s SF.

Asimov’s blasts into January/February 2019 with Alexander Jablokov’s revelations re “How Sere Looked for a Pair of Boots.” This novella discloses more about the complex interactions of aliens living in Tempest and the motivations of our indomitable heroine. In Robert Reed’s latest novella, a mysterious organization of “The Esteemed” takes on a dangerous and powerful time traveler. Thrilling suspense flourishes in each of these enthralling tales.

Suzanne Palmer’s star farer discovers a horrendous crime while “Taking Icarus Home”; a time traveler realizes what makes “All the Difference” in a new tale by Leah Cypess; Jay O’Connell freaks us out with “The Gorgon”; and a mother attempts to save her son from his art in Sean Monaghan’s “Ventiforms.” When the Company returns to an abandoned colony world, Peter Wood unearths why desperation calls for “Salting the Mine”; Lavie Tidhar reveals that there is sorrow and hope in “Neom”; in the rising seas of the heartland, William F. Wu shows us what’s “Written in Mud”; and in her new short story, Sandra McDonald muses on the Barbadian pledge to be a “Credit to My Nation.”

Robert Silverberg’s Reflections strolls through Zoë Lescaze’s Paleoart “Looking Backward” at Megalosauri and Iguanodons while James Patrick Kelly’s On the Net laments the loss of a “Cosmologist, Space Traveler, Hero.” Don’t miss Paul Di Filippo’s On Books, our poetry, or our Index of 2018 works, and be sure to vote in our annual Readers Award Poll.

Get all the details, including story excerpts from the latest issue, here.

Here’s editor Trevor Quachri on the contents of the latest Analog.

We kick off 2019 with a bang – literally. When an asteroid impacts the Earth, will human ingenuity and tenaciousness carry (at least some of) us through? Find out in “Ring Wave,” our lead story by Tom Jolly.

Then we have “Epigenetics: The Future of Genetics in Health and Fiction,” our fact article from Doug Dluzen, as well as a fine array of other fiction, including “The Savannah Problem” by Adam-Troy Castro, in which a covert operation on Draiken’s road to revenge encounters a problem as old as mankind; one fed-up consumer devises a clever solution to ubiquitous advertising in J.T. Sharrah’s “A Message from Our Sponsor”; a far future where disease has ravaged humanity, but also been turned to useful ends, in Andy Dudak’s “Love in the Time of ImmunoSharing”; a family’s survival against a creeping threat in “Fingers” by Frederic Himebaugh; a race to the top of a particularly dangerous summit, in Joanna Miles’ “The God of All Mountains”; something many of us have considered the wisdom of, in Leah Cypess’s “Parenting License”; a subtle situation of verbal detente (or is it M.A.D.?) in Robert Reed’s “Reboot”; an alien zoo that’s not quite what one would expect, in Shane Halbach’s “The Last Squirrel Keeper”; a rush to escape a deadly alien environment in Marie Vibbert’s “A Place to Stand On”; and an eagerly-anticipated sequel from Howard Hendrix, in “The Narrowest Eye,” plus much more, as well as our regular (and regularly excellent) columns.

Complete details on the issue are here.

As I’m sure you’ve noticed, the covers this month are spectacular. Asimov’s is a reprint by none other than Michael Whelan, the little known back cover to Samuel R. Delany’s 1981 Bantam collection Distant Stars. 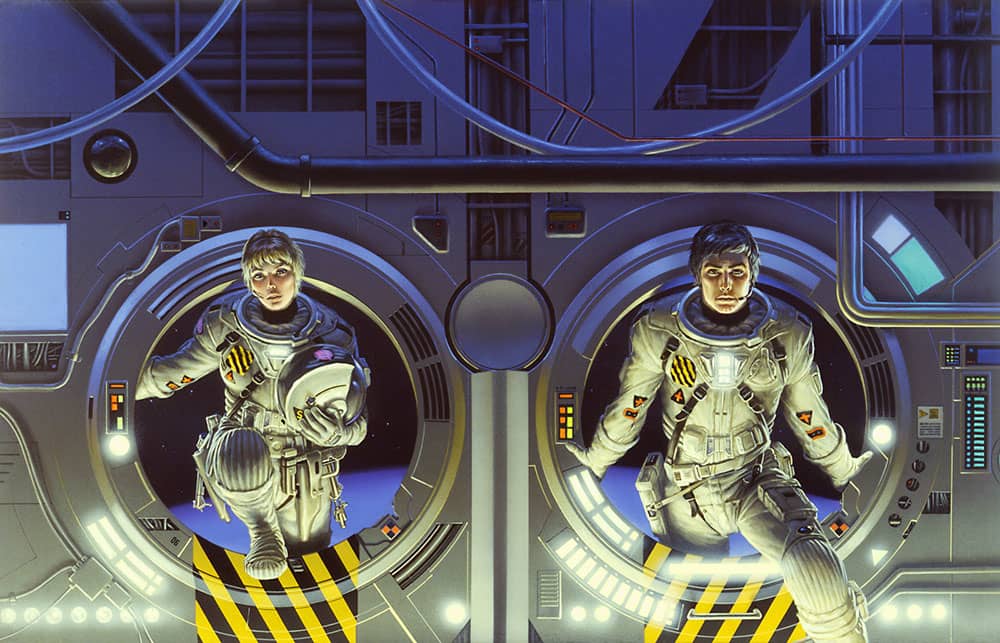 As far as I know the cover to Analog is an original, a magnificent piece by Donato Giancola, the artist behind the cover for Black Gate 15.

Robert Reed has a story about empathy drugs is the current (Jan/Feb) issue of F & SF also.

Impressive stuff! Anyone out there know if anyone else has scored that particular hat trick before?