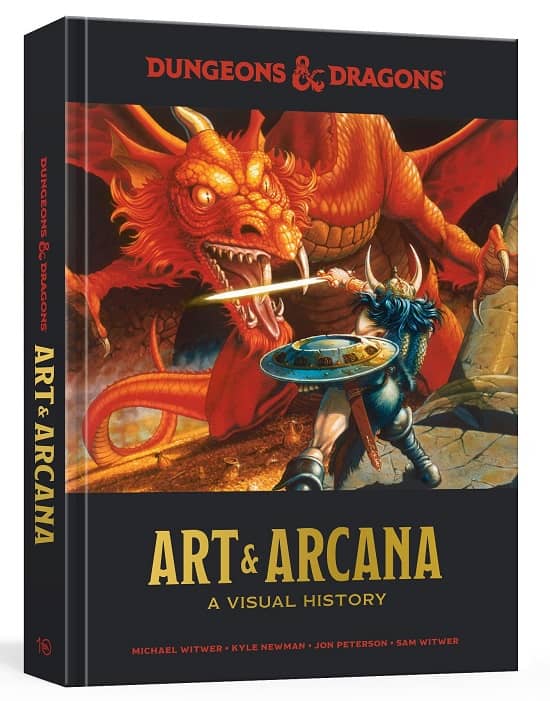 Art and Arcana is a massive book that satisfies a strong sense of nostalgia for those who played Dungeons and Dragons in the 1970s and 80s, as well furnishing a history of the game and, to a lesser extent, the people and companies behind it. Focused primarily on the artwork that has helped define the game from its earliest days, authors Michael and Sam Witwer, Kyle Newman, and Jon Peterson have provided a beautiful look at the game’s first forty-five years, with an emphasis on the first few editions.

Even the endpages of this 440 page book indicate what is sandwiched between them. The opening pages show a map of the Village of Hommlet from the classic T-1 dungeon, while the closing pages are a reproduction of a classic piece of Erol Otis’s artwork from Deities and Demigods. A foreword by Joe Manganiello points out that “in [the 1980s], Dungeons and Dragons wasn’t cool.” As someone who began playing the game in 1980 (in Glenview, where the Witwers were from, although I didn’t know them), Manganiello’s comment is an understatement. At the time, the concept that stars like Manganiello and Sam Witwer would be involved with a book about Dungeons and Dragons would have been mind-boggling, as would the idea that the host of a late night talk show like Stephen Colbert would admit to playing it, or that people could make a living as a Dungeon Master and charge people to watch their games. 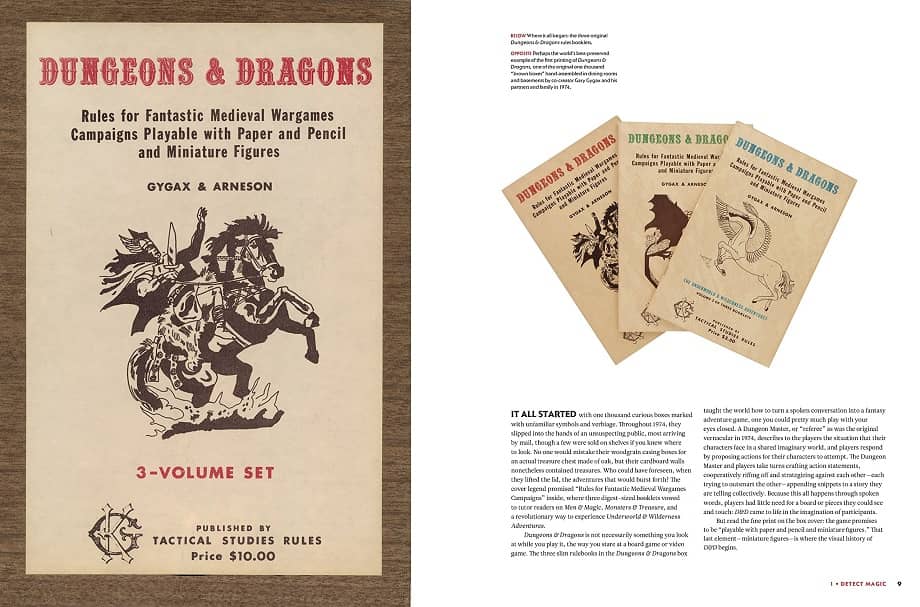 The book is divided into nine chapters, each focusing on a different era of the game’s history and named for a Wizard spell of the appropriate level. The original edition, comprised of inexpensively made brown-covered books is covered in “Detect Magic,” the Second Edition when things began to change is named for “Polymorph Self,” Wizards of the Coast’s purchase of TSR and the subsequent third edition are covered in chapters called “Bigby’s Interposing Hand” and “Reincarnation.” More than fanservice, this type of titling is clearly the result of a group of D&D players having a good time and sharing their love of the game rather than corporate oversight.

The authors note that nearly every illustration from the early books has become iconic in the gaming community, and they had to select which ones to include in their overall representation. While some seem to have been chosen at random (which doesn’t mean they are poor choices), many were selected specifically to accompany discussions in the text. For instance: comparisons between some of the First Edition artwork and the earlier artwork the artists were paying homage to; a comparison between the original drawings for Tomb of Horrors and the published versions; and a montage of devils, demons, and liches from the first edition Monster Manual referenced during a discussion on the use of those creatures to vilify AD&D in the 1980s.

Similarly, throughout the book are two-page spreads showing characters and monsters in the various editions, so readers can see the evolution of Lolth from her introduction in 1978 to her most recent incarnation in 2008, or the way mind flayers have changed from their earliest appearance. 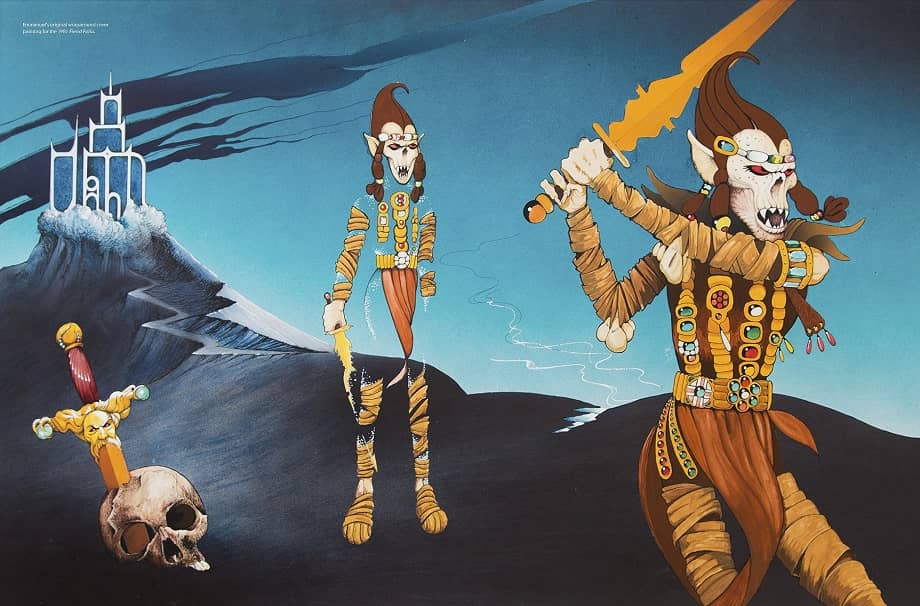 Art and Arcana doesn’t just focus on the books and modules that made up D&D‘s many editions. The authors also have reproduced ads used by TSR to promote Dungeons and Dragons, miniatures made to tie into the game, and licensed card, board, and computer games, from the early Pools of Radiance to Shrinky Dinks to the Saturday Morning cartoons. Even gamers who were immersed in AD&D will find themselves alternating between remembering playing or using the illustrated products, to remembering items they had long since forgotten, to discovering things they never knew existed.

The authors also shed light on some of the decisions made. While it was well-known at the time that demons and devils were dropped from the Second Edition because of problems with evangelicals, to be replaced by baatezu and tenar’ri, it was not as well known that the First Edition AD&D covers by Jeff Easley replaced the earlier covers for the same reason. The authors also discuss the way art interior and cover art was specifically used to help readers understand how the game was meant to be played and spur the players’ imaginations. 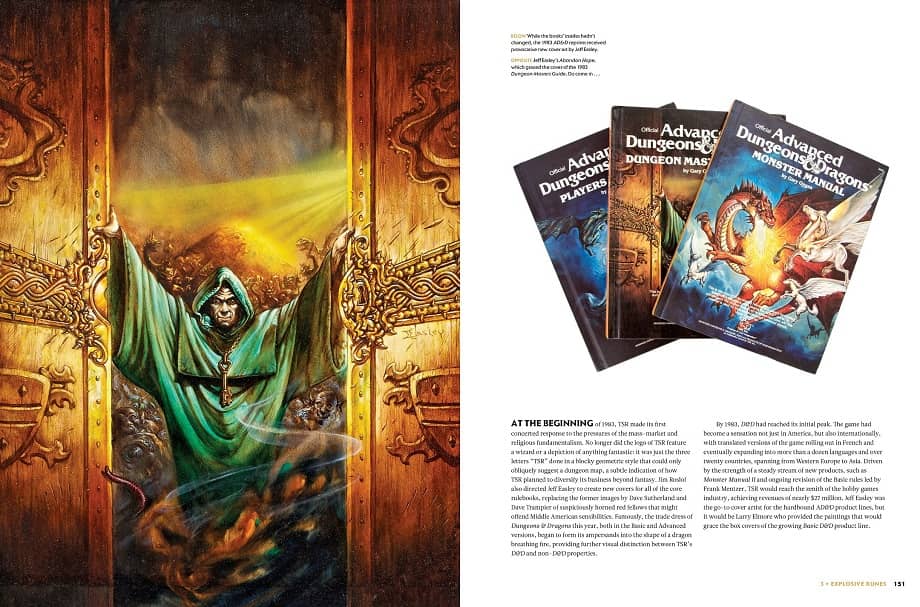 While the growth of the game and its artwork from the earliest pen and ink drawings to more professional artwork was an obvious evolution in overall aesthetic, the book also points out changes in the ways maps were designed and incorporated. In some cases the look of the maps (and artwork) was dictated by reproduction methods, but changes also occurred when artists and authors wanted to show more complex maps that related areas on multiple levels.

The history of TSR comes up through ing the first few chapters, since the growth of the game was directly tied to the company. Once TSR was purchased by Wizards of the Coast and later Hasbro, it became a small enough part of the overall company that the corporate focus is underplayed in the text. Similarly, the book is about D&D, so while some of the other games created by TSR are discussed, others, like Boot Hill, Star Frontiers, and Gangbusters, are not mentioned. 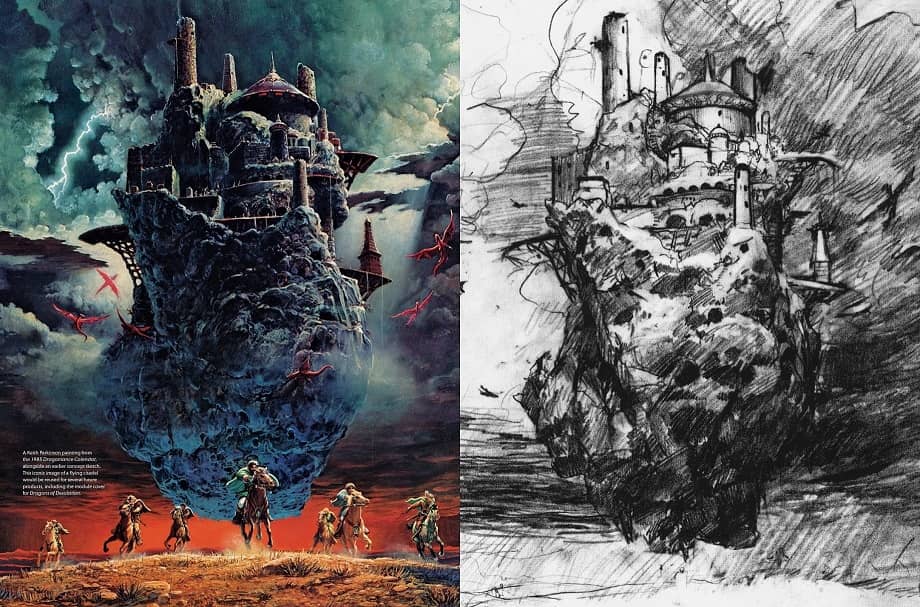 Some of the most visually stunning spreads are not reproductions of individual pieces of art from modules, magazines, or games, but the pages that compare the same creatures over time, and the book’s authors acknowledge this with a two page spread that collects all 27 covers of the Monster Manual, Players Handbook, and Dungeon Master’s Guide across the original edition and five subsequent editions. The only downside of this display is the location of the twentieth edition covers by Jeff Easley on the book’s gutter.

Art and Arcana is not only a beautiful book looking at more than 50 years of gaming art, but it also provides the most complete public history of Dungeons and Dragons, its founders, and the culture which has grown up around it. Interspersed with the familiar iconography of the game are pictures of its founders, internal corporate memos, and rarely seen sketches that led to the more familiar final versions of the artwork. It is not only an essential work for current gamers, but also for those who have fond memories of playing AD&D when it caused one to be ostracized rather than celebrated. 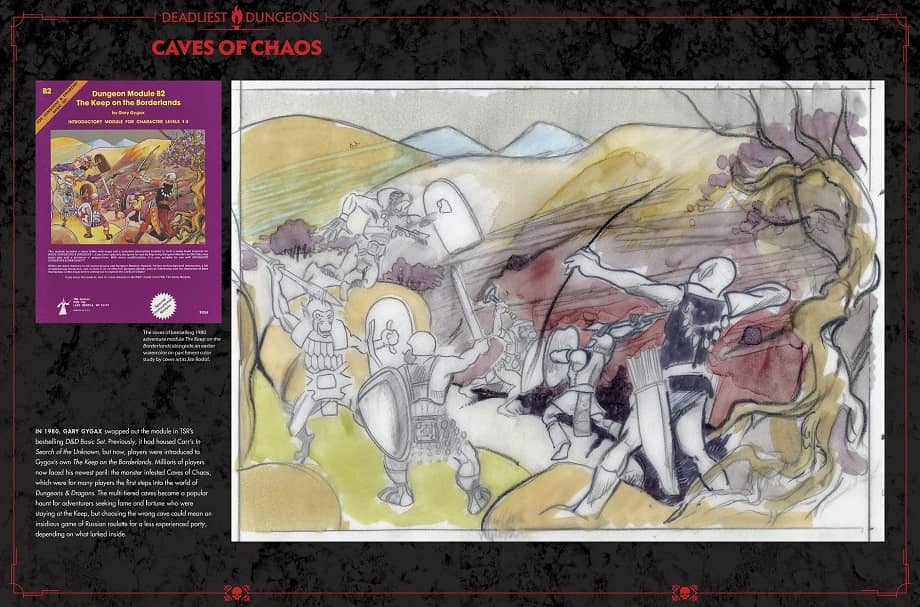 I got the collectors/nice edition and while it sucks the nice art extras included are folded… they are still beautiful.

the book while mostly something to gaze at, has some great history info too, if at all interested in the art, or the history at all i think the book is fantastic.

great review, thanks for diving into it!

I got just the regular edition and yes, it’s a really nice book and fills me with nostalgia (even though I have an awful lot of the original 1st edition books & modules still on my shelves).