Though there is no shortage of great offerings from the likes of Netflix, Hulu, etc, it’s hard to not heave a sigh knowing we’re still a way off from our favs. Game of Thrones’ final season has been confirmed for an April, 2019 release, though an exact date hasn’t been announced. We also know we’re going to have to wait until sometime in the summer of 2019 to binge season 3 of Stranger Things, though that is about as much detail as has been let out. There is a very amusing teaser trailer which I’ve included above if you haven’t seen it in all its 80’s mall glory, but other than confirming Steve is awesome, it doesn’t say much about what to expect from our friends in Hawkins, IN.

Word on the underground grapevine is that a substantial trailer as well as the exact release date for season 3 will come out during Super Bowl 53 on February 3rd. We also know filming wrapped in the fall, from the blurb that star Millie Bobby Brown posted on her Twitter feed for the first official Stranger Things Day which occurred on November 6th (the day Will originally went missing). 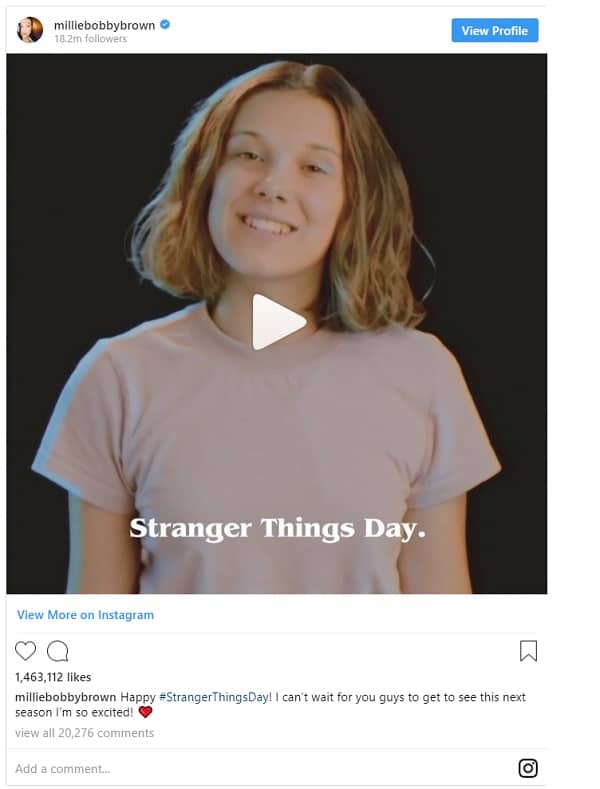 As if we needed another reason to love the show, Ms. Brown’s substantial acting talent, not to mention her temporary stint as a Chicago goth chick in season 2, would be motivation enough. Which is why I did a double take while scoping out the new teaser trailer for Godzilla: King of Monsters, which an enterprising fan leaked out of the Tokyo Comic Con last weekend.

Is that MBB I see?

Have a look for yourself but you’ll have to turn your head sideways.

Normally Godzilla, even when remade with every CGI effect known to mankind, would not be my cup of tea. But I must say I’m now just a little bit excited for May 31, 2019, which is the US release date for the film. The Internet is all abuzz about this leaked trailer too, though I’m not exactly sure why. I found a full-length trailer which has been out since August. But apparently for the hardcore fans, there are some significant additional tidbits in the Tokyo teaser, so I’ll have to take their word for that.

Ms. Brown, who will be turning the ripe old age of 15 right after Super Bowl weekend, is building quite a resume. According to IMDB she is already filming the sequel to Godzilla entitled Godzilla vs. Kong.

Considering what Hollywood has been known to do to fresh young talent, here’s hoping MBB has solid guidance for making good choices. I for one, can’t wait to see what she does next.