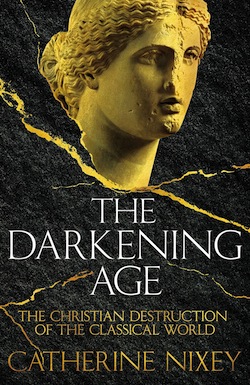 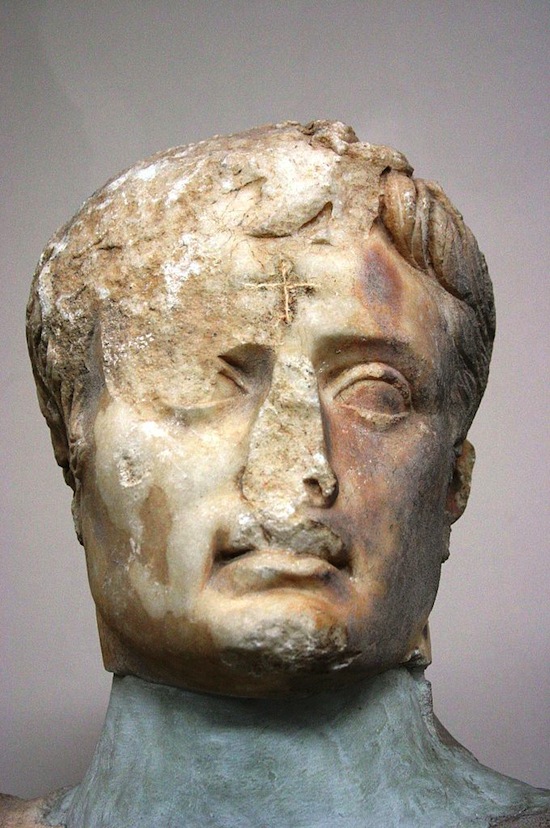 A bust of Augustus from Ephesus, its face disfigured by early
Christians, who then “sanctified” it by carving a cross on the
forehead. Imperial portraits were given the same treatment as
those of pagan deities because of emperors were often deified
and offered sacrifices. Image courtesy Wikimedia Commons.

After this riveting beginning, Nixey goes back to study the Christians of the 3rd century, when they had grown in number but still faced persecution because they refused to make sacrifices to the emperor. She recounts some almost humorous court records of judges brought to their wit’s end in their attempt to get Christian defendants to make a sacrifice. One judge, after several days of trying to convince a Christian to sacrifice, says that he can go free if he only touches a bit of incense. Even this is refused.

Nixey deconstructs the popular myths of grand persecutions in which thousands of Christians were cut down or thrown to the lions. She boldly states that the deaths from the persecutions, which happened in waves over a century, could be counted in the hundreds, a tiny number for something that was supposed to be happening universally across a vast empire. Nixey paints a tolerant Classical culture trying to get the Christians to join the fold.

That tolerance was not reciprocated. After Constantine decriminalized Christianity and began to favor it, passing laws to restrict “the pollutions of idolatry.” Within 50 years of his death, the penalty for offering sacrifices to the pagan gods was execution.

Much of the destruction and harassment was done by the early monks. For the most part they were not yet organized into monasteries, and lived half-starved and lonely lives in the wastelands, only occasionally banding together to raid pagan centers of worship and learning. When they did, they attacked with brutal violence. Not even Christian civilians, judges, and clergy were safe. Nixey gives several examples of such people being beaten up, mutilated, or killed for being soft on paganism.

Despite all this, the pagans took some time to disappear. One by one their temples were destroyed, their books burned, and their philosophers hounded out of the cities or, like the great mathematician Hypatia, skinned alive. Despite this, some temples and private chapels remained, and the Academy at Athens lasted all the way to 532 AD. By then, however, much of their learning had been lost and all the most beautiful temples gone, never to be rebuilt.

This is not a balanced book and it is not intended to be. Nixey states outright that she is trying to give a response to the countless histories of the era that are unbalanced in the other direction. The story of how Christian learning preserved some selected works of Classical learning through the Middle Ages, of how they built breathtaking churches and painted gorgeous illuminated manuscripts has often been told. But she set out to tell the tale that has largely been ignored by history and can only be found by returning to the primary sources.

It is a far less glorious tale of how some philosophers were beaten, tortured, interrogated and exiled and their beliefs forbidden; it is a story of how intellectuals set light to their own libraries in fear; And it is above all a story that is told by absences: of how literature lost its liberty; of how certain topics dropped from philosophical debate — and then started to vanish from the pages of history. It is a story of silence.

It is, in other words, a tale of warning, of how the march of civilization is not always forward, and that we must always be on our guard against movements eager to crush intellectual progress.

“This is not a balanced book and it is not intended to be. Nixey states outright that she is trying to give a response to the countless histories of the era that are unbalanced in the other direction.”

It’s one thing to attempt to set some record straight or fill out our picture more broadly with more accurate historical evidence. It’s another thing to just rant against a historical view because you don’t like it. In the age of Trump where bombast and shocking claims are evidently be treated as newsworthy, I can see why such “histories” sell. It’s not a surprise that Nixey’s day-job is journalism!

I understand that controversy and big noise sell books, but how much of this is actually new? It seems to me that most of it can be found in Robin Lane Fox’s Pagan and Christians (a thirty year old book) or for that matter in Gibbon. Neither Fox nor Gibbon was a friend of Christianity, but I doubt that they would have compared the early church to ISIS, even if they had had the opportunity, because whatever their unavoidable personal prejudices, they still saw themselves as historians and not polemicists.

I think people do use history polemically, though. (We see it here in Scotland all the time.) So it’s good to provide a powerful counter-reading. I’m not sure, though, whether I can face reading this book.

People certainly do use history polemically, but that’s different from being an historian – or should be. History and polemics exist on two sides of a line, and when you cross over it, the temptation is to stay there. Every statement, every assertion, every use of facts and evidence after that point becomes highly questionable.

The past few years I’ve been reading Francis Parkman’s epic eight volume history (or is it nine?), France and England in North America. I’m currently reading the fourth volume, The Old Regime in Canada. Parkman doesn’t pretend to be a machine – he makes no secret of his belief that it was a good thing that France and what he calls “Catholic absolutism” were defeated, but he he doesn’t preach. In the second Volume, The Jesuits in North America in the Seventeenth Century, he doesn’t present the Jesuits (wrongheaded as he thinks they were) as villains, not the Indians as heroes – or vice versa. He puts himself in the place of each actor in succession in order to carry out the prime task of the historian – understanding. Virtues and vices are assigned to both sides, with no view to scoring points in contemporary controversies.

Parkman had his opinion like everyone else, but he was a man of wide human sympathy and cool judgement. All I know of Ms Nixey’s book is Sean’s summary, but somehow I don’t think she fits that description. I’ll be passing.