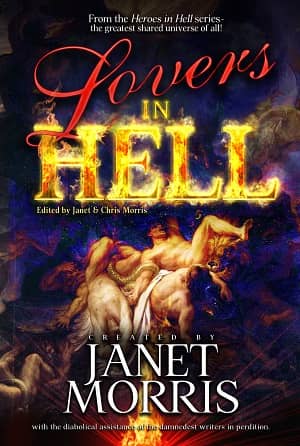 Doctor Victor Frankenstein, whose brain resides inside the skull of his infamous Monster, is back to his old tricks again.

After he and Quasimodo finish their tour of duty in the Mortuary, where they assisted the Undertaker and Gorgonous, his Deputy Assistant, in resurrecting and reassigning the Damned, and sending them back out into Hell again, they return to the Golem Heights and to their home, Goblin Manor.

At first it appears that it’s going to be just another hellish day in New Hell City, until one of the most celebrated figures of Victorian England makes an appointment to see the mad doctor and his hunchbacked assistant…

As promised in my last article, “Live. Die. Repeat. That’s What Hell’s All About — an Excerpt from Andrew P. Weston’s Hell Gate,” here is the final part of my examination of the Doomed and the Damned, an excerpt from my story in Lovers in Hell… a Gothic little love story I call “Withering Blights.”

Well, that concludes my 3-part glimpse into the circles and levels of Hell. You can read “Withering Blights” in its entirety, as well as nine other diabolical tales by Janet and Chris Morris, Nancy Asire, S.E. Lindberg, Michael E. Dellert, Michael H. Hanson, A.L. Butcher, and Andrew P. Weston in Lovers in Hell, the latest volume in the infernal eternal saga of Heroes in Hell™.

Thank you, John O’Neill. This is a great introduction to my story excerpt.

And thanks again, John O’Neill for going above and beyond in setting up the excerpt from my story. This is fantastic!

Thanks, Seth Lindberg. Easy for an outcast like me to put myself in Merrick’s head.