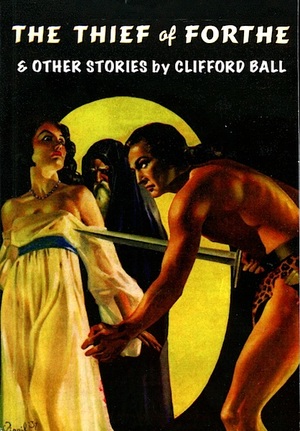 It’s been a bit of a shock, even if a somewhat welcome one, to be done with Glen Cook after so many weeks. I’ve been so immersed in the world of the Black Company that it feels a little weird to be moving on. Fortunately, I was able to turn around and pick up the brand new collection containing all of Clifford Ball’s short stories. Who’s Clifford Ball, you ask? Well, let me tell you. Actually, let Dave Ritzlin tell you:

Little is known about Clifford Ball. His brief career as a writer began in 1937. Ball, a devoted reader of Weird Tales since 1925, was deeply upset by the suicide of Robert E. Howard the previous year. Presumably Howard’s death motivated him to pen sword-and-sorcery stories of his own in an attempt to fill the void left by the departed master. “Duar the Accursed” appeared in the May of 1937 issue of Weird Tales, and the influence of Howard was readily apparent.

Ball wrote two more S&S tales, followed by three non-S&S fantasies, and then vanished back into the audience from which he’d arisen. A short bio from Weird Tales stated he worked all sorts of jobs, including ditch digger, factory worker, and barkeep. According to Wikipedia, he might have been born in 1896 and probably died in 1947. And that’s it. That’s all that seems to be known about one of the earliest S&S writers.

All Ball’s S&S tales take place in the same land of ancient kingdoms, beautiful queens, conniving wizards, and demonic powers. The use of the same place names and gods in all three make it seem as if he was beginning to develop a coherent setting, but with so few stories the world doesn’t get the chance to come fully to life. As with Henry Kuttner’s Atlantis setting, Ball’s was headed in the right direction but he didn’t get the chance to achieve it, and it’s a shame. There’s a creative exuberance to these stories that make me wish Ball had carried on.

“Duar the Accursed” features its titular protagonist, and on the surface he’s an easily recognizable Conan clone. What makes him different is his mysterious past — he has no memory before awaking on a battlefield some years ago. Since then he’s taken to a roving life, but one shadowed by dark omens, including a raven that dogged his pirate galley and earthquakes that leveled a kingdom he ruled.

As the story begins he’s been captured by Queen Nione of Ygoth. He has come to her land to steal the fabled Rose of Gaon — “a jewel magnificent in size and beauty” — from the Black Tower. The tower, while housing the gem, also serves as the place of punishment for citizens guilty of crimes too horrendous to allow for a clean death. They are marched in and left to powers unknown for the execution of their sentences. Needless to say, though by unexpected means, Duar manages to escape his imprisonment and makes for the Rose of Gaon, by way of the Queen’s bedchamber.

Years ago, when I first read the story in Lin Carter’s New Worlds for Old collection, I wrote:

The story isn’t great, or important, but it’s a taste of of how the genre started to crystallize in the wake of Howard’s death. C. L. Moore and Clark Ashton Smith forged their own trails in the genre. Clifford Ball was guided by Howard’s lantern and did a credible job in his first go at crafting an intriguing tale of heroic adventure.

The story remains not-great, but it is pretty darn good with some nice, weird bits. I also now suspect it was probably more important to pushing S&S forward than I thought back then. Ball was one of the earliest authors to show that S&S wasn’t just something a few specific authors wrote, but an actual genre that anyone else with a heart for it could do. 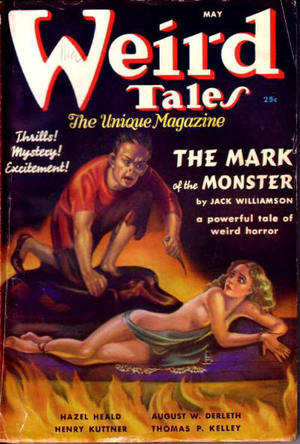 Ball’s other two S&S stories feature a naked-save-for-his-loincloth thief named Rald. In the first story, “The Thief of Forthe”, he makes the same mistake many a barbarian adventurer does in S&S: he agrees to involve himself in the doings of a scheming wizard. In this case the wizard, named Karlk and rumored to “not be of the race of men”, has come up with an elaborate plot to steal the symbol of rightful authority in the kingdom of Forthe. Even when it first appeared in 1937 it wasn’t that original, but there’s a lunkheadedness to Rald I found fun. Even with just three tales, it’s evident Ball knew what he liked and was working out how to convey that

The second Rald story, “The Goddess Awakes”, is my favorite in the collection. Rald and a companion, Thwaine, have just survived a bloody battle. Hoping to make it to some place of refuge, they instead are captured by a band of women warriors. Imprisoned, they learn they are to be offered in sacrifice to a human-devouring goddess whose statue awakens periodically.

What makes this one stand out for me is the banter between the two heroes. It’s fun and, again, there’s an imperturbable thickness to Rald that’s appealing.

Twilight faded rapidly into the night as the two fugitives gained the ragged summit of the mountain ridge. They paused there for a moment’s rest as the full moon swept over the black crags and illuminated the valley below. Great clefts and crevices, shadowed by broken ground and projecting boulders, presented a treacherous path for night travelers; it was difficult to determine solid objects from the unsubstantial in the misleading network of black and silver. The two halted to gaze at the apparent desolation of empty pits and jagged peaks, then at each other and, finally, at the plain behind them, over which they had so recently painfully struggled.

“If this be refuge,” said Rald, “then Hell at least would be brighter!”

“Refuge, like gold, is where you find it,” replied the weary Thwaine, shifting his wiry frame to rest a blood-stained thigh on a convenient boulder. “Perhaps the valley is a trifle forbidding, but when I recall the thirsty steel of those devils back there on the battlefield I welcome these concealing cliffs with a thankful heart.”

“Always the orator!” grunted Rald. “Make a propitiating address to the demons, who no doubt await us below, before we descend to them — will you?” 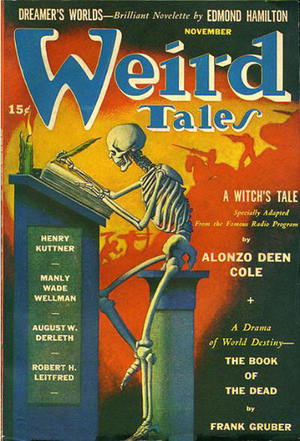 If you read these three stories (which I think you most definitely should), it will not change your world or reveal Clifford Ball as some great lost talent. But they will give you some nice insight into the roots of this stuff we love called sword & sorcery.

The other three stories in the collection are reminders of a time when fantasy, horror, and even science fiction were bound by only the flimsiest of genre rules. A writer could skip back and forth between any of them, unshackled to any sort of demands to be one sort of author or another. Within any story there could be elements of all three of those things (and more) and no one, least of all readers, would care. Of course there are still writers who slip into and out of one genre or another with ease and great popularity, but for the most part, fantasy and science fiction writers tend to stick to well-worn grooves and conventions these days.

“The Swine of Ææa” concerns a drunken old salt telling a tale of a stowaway on a tramp steamer in the Aegean. For the classically inclined there’s no surprise in this story, but it’s fun nonetheless. “The Little Man”, a sci-fi mystery, opens with the title character tugging the arm of a police officer to tell him where to find a corpse. “The Werewolf Howls”, the final and the weakest story in the collection, concerns an aging French landowner preparing his three sons to hunt a giant wolf. The setup is obvious and the story lacks any narrative suspense.

Ball’s stories are the works of someone still finding his feet. They aren’t as polished as those of his model, Robert E. Howard. Still, taken together, these are also the stories of someone who could have been a solid talent had he continued writing. Nowadays, S&S is a long-established fantasy subgenre, but once upon a time it was being built by a handful of writers like Clifford Ball.

Dave Ritzlin has done a tremendous service in getting this book into print. While the first three stories have been reprinted now and again, it’s still been over forty years for most of them. The last three haven’t seen the light of day since their original appearances in Weird Tales. With cover art by the great Virgil Finlay, DMR Books has created a complementary addition to any S&S fan’s shelf.

Fletcher Vredenburgh reviews here at Black Gate most Tuesday mornings and at his own site, Stuff I Like when his muse hits him. Right now, he’s writing about nothing in particular, but he might be writing about swords & sorcery again any day now (actually, I’m writing about war in 19th century Europe).

I read this one a month or two ago and agree with your assessment — not a masterpiece, but solidly entertaining and of great historical interest.

They also did a companion volume of Nictzin Dyalhis’ fiction (although that one largely overlaps the Wildside collection from a few years ago).

I wanted to love these stories when I first read them, due to their age and provenance. But they were merely decent, and that was owing to their place in history. If they came out now, they would seem a bit lesser.

But the thing that strikes me, as it seemed to you, was that they could have been more. There was the hint in all three S&S stories of something just around the corner, if the author had reached or striven a little harder, or perhaps let his muse build a little more.

Still, a decent legacy for someone at the dawn of the genre. Glad to have the DMR collection!

Somehow I missed this article when it came out. Sounds like Ball was one of the competent-but-not-inspiring writers of the time. A valuable role!