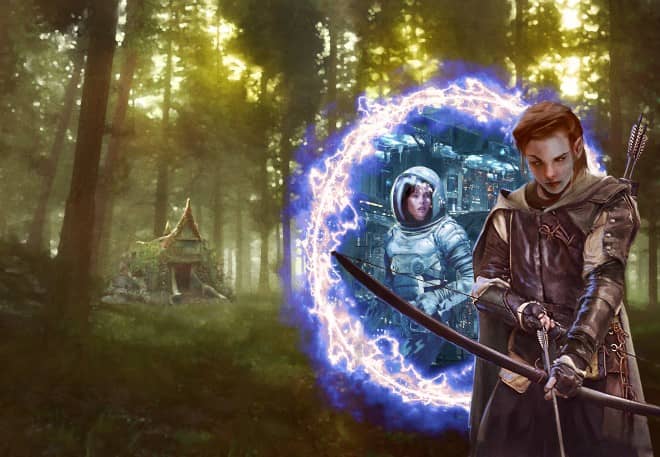 It began in 2007, when the World Fantasy Convention was held in Saratoga Springs, NY. That’s basically a few hours drive from where I live. At the time, Patricia Bray was also living in Binghamton and I had just been published by DAW Books. (The Skewed Throne came out in hardcover in January 2006 and The Cracked Throne followed in November 2006.) I was, of course, looking for ways to promote the books and so with WFC so close, Patricia and I came up with a plan to throw a party on Thursday night at the con. We invited S.C. Butler, Barbara Campbell, C.E. Murphy, and Jennifer Dunne to join us (mostly so we could split the costs and make it affordable for all of the authors involved). We planned out the alcohol, the snacks, getting a room at the convention, getting invites printed up to hand out at the con, etc., etc., etc.

But we needed a name for the party.

The Throne of Amenkor trilogy. Covers by Steve Stone and Larry Rostant

We ended up calling the party Zombies Need Brains. I believe it was Jennifer Dunne’s idea, actually. We handed out postcard invites to the party at the ice cream social Thursday night. We gave everyone tickets when they entered and handed out prizes all night. The room was jammed and at one point George R.R. Martin came in and settled down in the middle of the main room and pretty much stayed there all night. I believe we kicked the last people out around 3am and then did massive clean-up. We donated leftover alcohol and food to parties that were going on the next night. It was a blast and, I have to say, the best party of the weekend.

Anyway, flash forward five years. I’m contemplating creating a small press so that I can continue my addiction and produce themed anthologies at will. But what do I call the small press? I wanted something that was obviously SF&F oriented, but at the same time I wanted it to be fun. Not that we couldn’t produce thought-provoking anthologies, but, really, I just wanted to have fun with the press and the themes and stories.

And then it hit me: Zombies Need Brains. It was perfect — obviously SF&F related, but still with the quirky sense of fun I wanted the press to be known for.

So that’s where the ZNB name comes from.

And now, six years later, Zombies Need Brains is attempting to fund three new themed anthologies with a new Kickstarter (tinyurl.com/ZNBPortals). The themes this year are portals from one world to another, temporal deactivation, and alternate history where the divergence from our timeline comes from some kind of peaceful change in history. We have as editors Patricia Bray, S.C. Butler, David B. Coe, Steven H Silver, and of course myself. We have a slew of great anchor authors, including a few New York Times bestsellers. And over the course of the past six years, ZNB has managed to be recognized by SFWA as a professional qualifying market and three of our stories have been finalists for the WSFA Small Press Award (given out at Capclave). Two of those stories are on the ballot this year, so fingers are crossed we’ll win one.

We’ve grown a lot since that first step from party to small press, from that first rocky Kickstarter for a single anthology called Clockwork Universe: Steampunk vs. Aliens (now out-of-print) to our current run funding three anthologies all at once. We’ve managed to produce ten anthologies during that time. But we couldn’t have done any of it without our Kickstarter backers. Swing on over to tinyurl.com/ZNBPortals and check out our current project. Maybe you can help us grow even further, from ten anthologies to thirteen … and beyond!

Joshua Palmatier first novel The Skewed Throne was a Compton Crook finalist for best first novel in the science fiction and fantasy genres for 2006. The Cracked Throne and The Vacant Throne completed the series, all published by DAW Books. He is the author of two additional fantasy series, Well of Sorrows and the Erenthrall Series (Shattering the Ley, Threading the Needle, and Reaping the Aurora). He is also the founder of Zombies Need Brains, which has published ten original sci-fi and fantasy themed anthologies, including The Razor’s Edge, Guilds & Glaives, and Second Round: A Return to the Ur-Bar. Find out more at www.zombiesneedbrains.