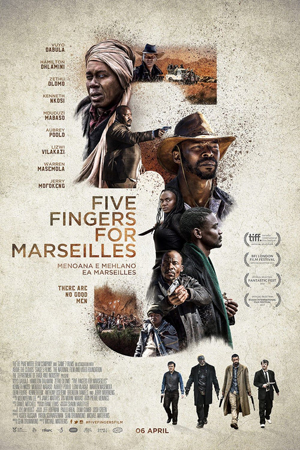 I went by the screening room early on August 2, the last day of the 2018 Fantasia International Film Festival. It was my final chance to see some of the things I’d missed at the festival, and if I watched three movies in the screening room before heading off to watch the two films I wanted to see that evening at the Hall Theatre, then I’d total 60 movies on the year. And I knew going in what the first film I wanted to see at the screening room was, a film that had gathered a goodly amount of buzz around the festival. On the first day of the festival I’d begun Fantasia 2018 with the revisionist Western Buffalo Boys; now I’d begin the last day of Fantasia 2018 with a different kind of revisionist western.

Five Fingers for Marseilles was directed by Michael Matthews from a script by Sean Drummond. A South African film, it starts in the days of apartheid, when five boys have formed a pact to protect their town from outsiders: the Five Fingers, they call themselves. Then White soldiers show up, and things go terribly wrong. Tau, the proudest, kills a man. Twenty years pass; Tau (grown into Vuyo Dabula, who has had roles in Invictus and Avengers: Age of Ultron) becomes a thief and hardened killer, has a change of heart, is imprisoned, is released, and finally returns to his home, to the small town named Marseilles in emulation of a distant European centre. The Five Fingers are no more; the leader’s dead, another one’s become mayor, another’s the chief of police, another’s a priest. The girl who once was closest to the Fingers, Lerato, is now a woman (Zethu Diomo, Number One Ladies’ Detective Agency, The Book of Negroes) running a saloon, with a son by a dead man. And a gang’s trying to take over Marseilles, the Night Runners, led by the mysterious and charismatic Sepoko (Hamilton Dhlamini). Tau wants to put violence behind him and try to be a better man. But can the bad men around him be stopped by any other means? And even if he must again take up the way of the gun, will his childhood allies stand with him? Or can he surround himself with a new group of Five Fingers?

The western aspects are strong in this film. It’s a conscious evocation of the genre without being derivative, romantic, or overtly knowing. It never winks to the audience. But it builds a story around a bad man trying to be better, with a mythic past of violence behind him. The heroes and villains both have the fable-like qualities of good western characters. Not just Sepoko but each of his Night Runners have individual looks. The Five Fingers, meanwhile, are shown early in the film riding their bicycles across the land very like young horsemen — a nod, without being a wink, to the iconography of the cowboy. 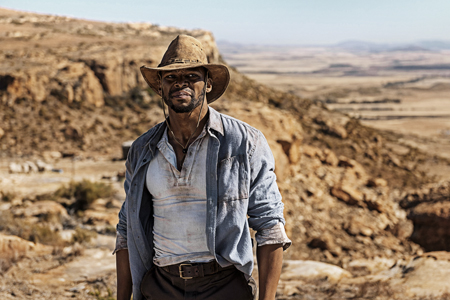 That land they cross is stunningly beautiful. The cinematography in this film is jaw-dropping, and never more so than in the way it depicts the terrain. The movie’s filmed in the Maloti Mountains, and they look here like something out of a John Ford film. “The land is all the scripture we need,” a character says once, and we believe him: there’s a majesty in these hills. Here as elsewhere, the film doesn’t simply create a sense of coolness, but of awe.

Against this mythic landscape move the archetypal heroes and villains of the western. This isn’t the most action-packed movie, though; it’s a film that builds tension, letting the threat of violence hang over most of the scenes like a gathering thunderhead. If the photography recalls Ford, then in this it is like Sergio Leone, just as the soundtrack echoes the classic Western. A stranger comes to town, and sends ripples through the interactions of the different power groups: and, inevitably, it leads to gunplay.

Note that there are no automatic weapons here, or cell phones. There are automobiles, but not many, and no computers. The technology’s not Victorian-era, but the feel of the setting again echoes the Western. That this should be the case in the twenty-first century is the outcome of the colonialism that impoverished the people, and much of the way the town interacts with the Night Runners has to do with money. This theme’s foregrounded from the opening of the film. A voice-over tells us: “First came the trains, and with them came the settlers, bringing their towns with them: Paris, Roma, Barcelona… and Marseilles… And they called it their land.” But now Paris and Roma and Barcelona are falling; and the people once forced out of the area of Marseilles are reclaiming their home. The story’s situated as a fable of indigenous anticolonialism, emphasising aspects of history similar to the American West. But it’s not directly a story of resistance; this is about what happens in the aftermath of colonialism, in a land shaped by distant powers but now trying to find itself again. 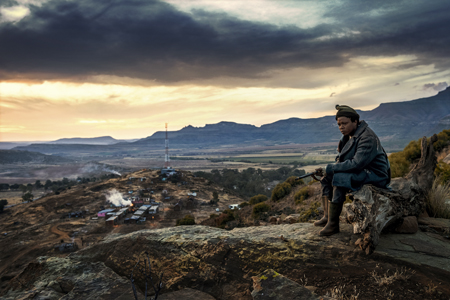 But although this is a film with rich themes, it’s primarily a story with a dynamic character at its heart. Tau’s voyage is deeply involving, not least because of the performance by Dabula. Weathered, beaten, you believe in him as the latest in a line of Western heroes, a dangerous man who’s trying to learn to be better. Perhaps even more fascinating is Sepoko, brought to life by Dhlamini as a villain out of the lineage of wicked would-be prophets, a man who believes himself in touch with the world beyond this world. He makes a powerful foil for Tau; there’s an elemental sense to the conflict between them, inevitable from the start, and catching all the other characters between them. The range of those characters is also fascinating. All the surviving Fingers have real arcs, are developed into real people, and so too for many of the people of the town. This complexity never becomes obtrusive, in that the secondary and tertiary characters never take up too much screen time or threaten to usurp the film, but there’s a community of people developed in Marseilles. The editing’s strong, focussed on character over action choreography, but still allows moments of lyric beauty as well as character beats.

The final battle’s satisfying, though surprisingly short. Still, every character gets their story developed (or ended). The past shapes the present; Tau’s old friend become a priest insists to him that “we are what we are because of you,” but that cuts both ways. Tau resists Sepoko for the sake of his home, and draws to him other men and women prepared to resist as well: prepared to enter into myth as heroes. This myth is not unmixed with tragedy, but that’s true of most of the great stories. This is a casting of Western fables in a new setting, a new guise, and so, among landscapes with more human history to them than any other in the world, it makes those stories new.

How much eyewash and aspirin do you have to lay in for this, Matthew? I though watching my way through the NBA playoffs every year was a grind, but this sounds even rougher…

You know, there are enough good movies that it’s not painful. It can be physically demanding in terms of lack of sleep when one film ends (well) past midnight and the next starts (well) before noon. Especially when two or three of those days come in a row. There’s a reason Fantasia’s become a high point of my year, though!

It’s a matter of how you approach movies: truly good movies can be genuinely energizing. I myself often am keen to watch another movie right on the heels of a first one if the first is good enough — an effort to keep a “high” going.

And even the bad movies allow for a certain degree of self-satisfied kvetching with the other viewers afterwards.

Being an old man now, I do wish they’d start the screenings earlier in the day, but I understand they’re catering to the younger, not-watching-fourteen-or-more-movies a week crowd.