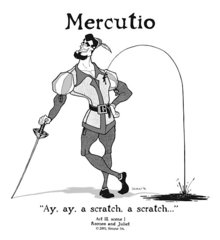 I’m sure most of you know this, but just in case: There’s a character in the play Romeo and Juliet that Shakespeare kills off. He’s a friend of Romeo’s named Mercutio. It’s his murder that leads to Romeo’s killing Juliet’s cousin, and everything goes down hill from there. So you can see how important Mercutio is from a plot/narrative point of view.

There’s something special about this particular character, though. He’s very witty, very quick, has some great lines/scenes. Actors of my acquaintance say they love to play him. He’s so popular, in fact, that the story is Shakespeare killed him off (instead of one of Romeo’s other friends) because he was a more interesting character than Romeo himself. After all, the play’s not called “Mercutio and Juliet” – though now that I think about it, that would have made a great play too, but probably not a tragedy.

Are secondary (or even tertiary) characters always doomed to die when they are more interesting than the lead? In fact, isn’t it necessary that the audience likes and cares about characters before you kill them? Certainly it happens that way in a movie, or in a novel for that matter. We’re always being told (and we tell others) that you have to make the audience/reader invest emotionally in characters that you plan to kill.

On TV these things are handled quite differently. Not to say that there aren’t plenty of Mercutios out there, because there are. As I’ve said elsewhere, however, on TV popular secondary characters are often give a spinoff, whether or not they’re threatening the popularity of the lead. But this doesn’t always happen. Because of TV’s continuing story lines, writers have other options besides spinoff or murder.

At a little remove from our genres, we’ve got The Big Bang Theory. If you watch the first episodes – which you can do somewhere every day – Leonard is the main or at least the central character. The actor’s name is given first in the credits (first or last are the good positions). But it doesn’t take long for Sheldon to assume centre stage. If you binge, you can actually watch it happening. Yes, it’s an ensemble cast, but once again it’s the quirky, witty (inadvertently on Sheldon’s part) character who shifted into centre stage.

There was also another show I can’t remember the name of. You’ll find this significant because I can remember the name of the show’s Mercutio character. Urkel. Steve Urkel. If I remember this part correctly, the character started out as the annoying boy next door, and pretty much took over the show. There was Jimmy Walker in Good Times. And didn’t M*A*S*H seem to become the Hawkeye show after a while? The Simpsons started out centred on Bart – at least that’s the way the merchandizing was pointing. Sure seems to be more about Homer now. Merchandise included. 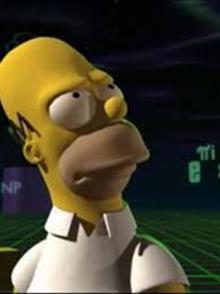 Getting a little closer to home, it’s a good thing the character of Angel was given a spinoff from Buffy the Vampire Slayer, because Spike is a way more interesting character. Bad guys often are, since they have more places to go than good guys. Once Angel is gone from Sunnydale, it doesn’t take Spike long to become one of the central characters. Spike is funnier, wittier, and in some ways far more wise than Angel’s more “heroic,” more “tragic” character. They actually have to turn Angel back into Angelus from time to time, just to keep him interesting. Even when Spike becomes a good guy, he doesn’t lose his innate “spikiness.”

I know what you’re thinking. Angel wouldn’t have worked as a spinoff from Buffy – and a successful one – if the character himself wasn’t interesting.  And I’m not suggesting that he got pushed out of the original show by the Spike character, because he didn’t. There are good reasons for the spinoff, which I looked at a couple of posts ago. In Buffy, Angel was a secondary character, though as the love interest he had a larger role than secondaries usually have. Angel is an ensemble cast show, just like Buffy. And just like Buffy, there’s a central character the others both depend on and support. In his own show, Angel, has no competition for the central role. Spike, who started out as less than a tertiary character on Buffy, ends by taking over Angel’s position, and becoming, in effect, second lead. Or, if you prefer, Mercutio to Buffy’s Juliet.

So popular was he, that Spike was later introduced into Angel. This introduction was possible because by this time the character of Angel was firmly established as the lead. Spike could be added into the mix without taking too much away from him. But think, how popular Spike’s character had to be, that they resurrected him (literally) in the first place.

Maybe Spike should have been given his own show. Hmmm.

Violette Malan is the author of the Dhulyn and Parno series of sword and sorcery adventures (now available in omnibus editions), as well as the Mirror Lands series of primary world fantasies. As VM Escalada, she writes the Faraman Prophecy series. Book Two, Gift of Griffins, was released last week.Find her on Facebook and follow her on Twitter @VioletteMalan.

Another example from Shakespeare – when you think of Othello, who do you think of first? I’ll bet you Turks to Venetians it ain’t Othello himself, but the “secondary” character Iago. I’m sure Shakespeare was planning a spinoff for him – an edgy, topical family comedy, sort of like Maude…

Thomas: I would pay to see Iago in a family comedy. I’m thinking, though, that the villain might be in a special relationship with regard to the hero, in that they’re both equally, or almost equally important.

I loved Mercutio’s portrayal both in Shakespeare in Love (where Shakespeare recruits Ned Alleyn to play the part by claiming he’s the character, then later, much to Ned’s surprise and dismay, plays up how amazing Mercutio’s death will be) and in Baz Luhrman’s Romeo + Juliet.

Joe H. I agree with Mercutio’s portrayal in Shakespeare in Love. Brilliant, one of my favourite bits. Tom Stoppard wrote the screenplay, if I recall correctly.

I actually played Mercutio once – it’s the perfect part. Steal every scene you’re in, go out with a bang a third of the way through, and spend the rest of the play backstage playing cards.

I watched a BBC version of “Othello” with Anthony Hopkins in the title role, and Bob Hoskins as Iago. I’ve never seen Iago done better. PURE evil, and in no way family comedy material. Edgy, however? Absolutely, if not for famcom, then definitely for dark comedy.

I remember that one, smitty – you’re right, Hoskins was terrific, though Frank Finlay (from the Olivier film) is my favorite ensign. Christopher Walken played the part in New York 25 or 30 years ago, and I would have given almost anything I had to have seen it. (Stuck in California earning a living, damn it.) If anyone was ever born to play Iago, it’s Walken.

I saw the Olivier version, as a high school senior, in 1968. Don’t remember much about it, although I’ve seen Frank Finlay in other films and I’d bet he WOULD do well as Iago. But Christopher Walken — yeah, I’d have paid to see THAT.