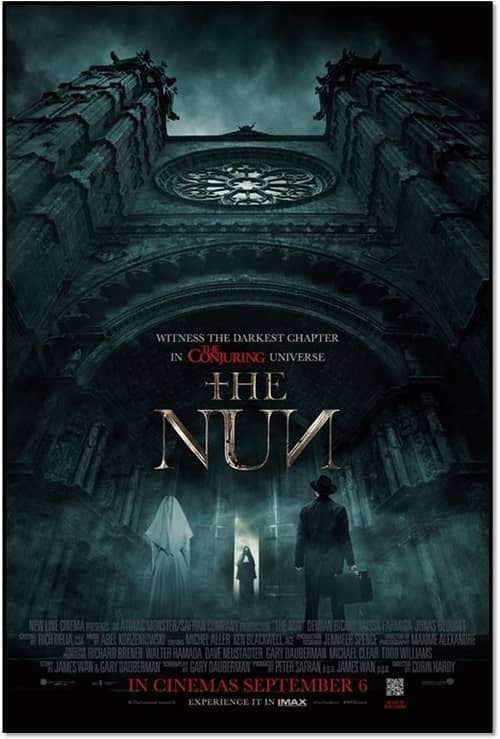 As we all know, there is no such thing as bad press. But in the world of horror, “bad” press is actually the best possible press you can get. Remember when several stores pulled the 90’s PC game Phantasmagoria off their shelves due to the violence? And suddenly if you had a copy you were the most popular kid on the block?

Earlier this week, a YouTube ad for Corin Hardy’s The Nun got a lot of people talking, mostly because it scared the crap out of them. In case you haven’t been following the plotline, The Nun is a spin off from The Conjuring 2, which itself is the fifth installment in The Conjuring series. Based on a story from James Wan, chief architect of the franchise, The Nun will be the chronological starting point for the entire shared universe, telling an origin story of sorts for a recurring villain, the ghoulish nun Valak.

And by the way, Valak isn’t and never has been a nun. According to the demon conjurer’s go-to guide, The Lesser Key of Solomon, a 17th century grimoire that acts a kind of Yellowpages of Hell, Valak (or Ualac, Valac, Valax, Valu, Valic, Volac) is none other than the Great President of Hell. Often depicted as riding a two-headed dragon and commanding 30 legions of demons, he takes on the visage of a small child with wings, which if you ask me, would have been way more terrifying than a nun in corpse paint. Hopefully The Nun will explain why a big cheese in the demon world has decided to take on the persona of early Marilyn Manson.

Anyway, back to the video.

It’s one of those “this is playing before the video you’re watching and you can’t skip it” type of ads, punctuated by a loud jump scare featuring the film’s terrifying title character.

And apparently, it was just a bit *too* scary.

Replying to Twitter user @bbydvas, whose tweet warning the rest of the internet about the ad went viral, Team YouTube has announced that the ad has been removed for violating the site’s “shocking content policy.” They tweeted, “Appreciate you bringing this to our attention! This ad violates our shocking content policy and it’s no longer running as an ad.” 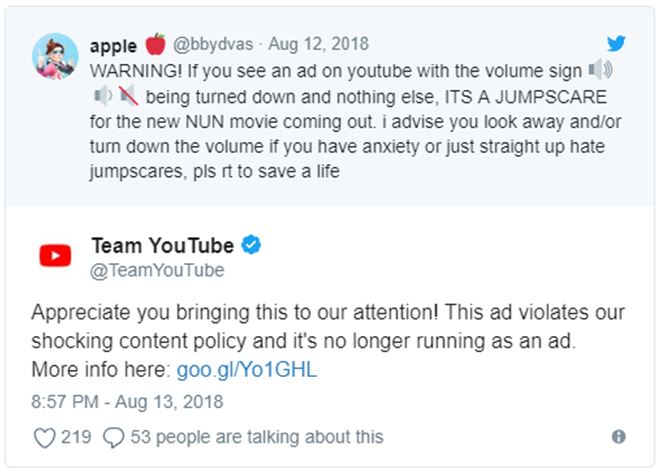 Seriously. I don’t even know what to say about this.

I scoured YouTube’s various policies searching for the aforementioned “shocking content policy” to determine what exactly constitutes “shocking”. However, all I could that even mentioned the word “shocking” was under the policy entitled “Violent or Shocking Content”:

Here are some examples of content that we consider or may be violent or shocking:

Whether or not this ad fits the above to the point of being removed, the publicity it has generated for the film is crystal clear.

Of course, you can watch it below since someone turned right around and reposted it. So please do and let me know if, publicity or not, this is a tad militant on the part of YouTube.

Say your prayers as The Nun jumps into theaters on September 7, 2018.

Yep, militant. That wasn’t bad at all.

Well, given that it was an ad that would play in front of other videos, not something that a viewer would deliberately set out to view, then I can kind of see why they might take it down, although I suppose it would depend on exactly WHICH videos it was getting attached to …

It was attached to very age-appropriate advertising. I’m afraid we’re surrounded by a bunch of plaid-flannel-shirt-wearing, emo’s and the horror industry is doomed…DOOMED I say…