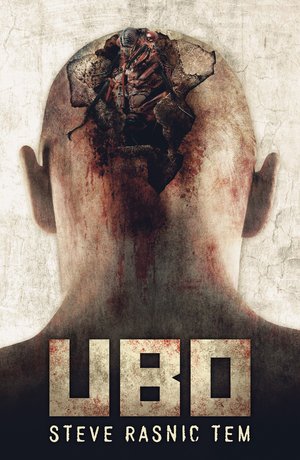 Steve Rasnic Tem is one of the most acclaimed writers in modern horror. His novels include Deadfall Hotel (2012) and the Bram Stoker Award-winner Blood Kin (2014), and he’s produced over half a dozen collections, including City Fishing (2000) and Figures Unseen (2018). He’s written over 350 short stories and his fiction has won the Bram Stoker, International Horror Guild, British Fantasy, and World Fantasy Awards.

His latest novel Ubo is a strange one, a hallucinatory tale of giant bugs and another world. In “Violence is My Biggest Fear,” an guest post at SciFiNow last year, Steve wrote:

Ubo is a dark science fictional meditation on violence and its origins. During the course of this novel I inhabit the viewpoints of some of history’s most violent figures: Jack the Ripper, Josef Stalin, and Heinrich Himmler among others. I’m not a social scientist, I’m a writer of fiction — I don’t pretend to offer any ingenious new solutions to the issue of human violence. What I do offer is an exploration, a range of eyes and angles through which to view the problem. Perhaps some readers will find their own imaginations triggered, allowing them to view violence in a somewhat different way.

Daniel is trapped in Ubo. He has no idea how long he has been imprisoned there by the roaches. Every resident has a similar memory of the journey to Ubo: a dream of dry, chitinous wings crossing the moon, the gigantic insects dropping swiftly over the houses of the neighborhood, passing through walls and windows as if by magic, or science. The creatures, like a deck of baroquely ornamented cards, fanning themselves from one hidden world into the next. And now each day they force Daniel to play a different figure from humanity’s violent history, from a frenzied Jack the Ripper to a stumbling and confused Stalin to a self-proclaimed god executing survivors atop the ruins of the world. The scenarios mutate day after day in this camp somewhere beyond the rules of time. As skies burn and prisoners go mad, identities dissolve as the experiments evolve, and no one can foretell their mysterious end.

Ubo was published by Solaris on February 9, 2017. It is 320 pages, priced at $14.99 in trade paperback and $6.99 for the digital edition. The disturbing cover is by Sam Gretton. Read Steve’s Locus essay “The Long Gestation Period of Ubo” here.