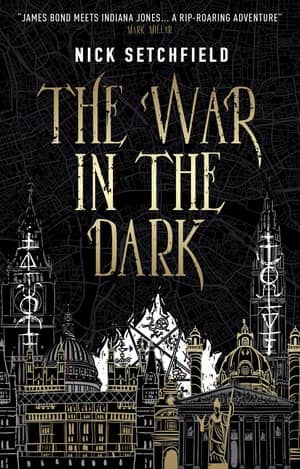 Nick Setchfield is a writer and features editor for SFX, the British genre media magazine. His first novel is The War in the Dark, a moody thriller that blends dark fantasy with post-war noir, and explores a hidden world in the heart of Cold War Europe. I like the cover, and the spooky-spy vibe. Here’s the description.

Europe. 1963. And the true Cold War is fought on the borders of this world, at the edges of the light.

When the assassination of a traitor trading with the enemy goes terribly wrong, British Intelligence agent Christopher Winter must flee London. In a tense alliance with a lethal, mysterious woman named Karina Lazarova, he’s caught in a quest for hidden knowledge from centuries before, an occult secret written in a language of fire. A secret that will give supremacy to the nation that possesses it.

Racing against the Russians, the chase takes them from the demon-haunted Hungarian border to treasure-laden tunnels beneath Berlin, from an impossible house in Vienna to a bomb-blasted ruin in Bavaria where something unholy waits, born of the power of white fire and black glass . . .

It’s a world of treachery, blood and magic. A world at war in the dark.

Ian White at Starburst previewed the book back in April, saying

It’s 1963 and British Intelligence agent Christopher Winter is on a quest to obtain a powerful occult secret before it falls into the wrong nation’s hands… the Russians are the least of Winter’s problems because, between demon possession, runes bloodily inscribed on the body, photographs in which he doesn’t have a face, and monsters who assume the features of people Winter knew (and loved) who are now long since dead, our hero is about to discover that the war in the dark even rages within daylight… it’s basically a more stylish reboot of The Devil Rides Out… It’s a terrific adventure, and let’s hope there’s more like this to come.

The War in the Dark was published by Titan Books on July 17, 2018. It is 405 pages. The cover artist is uncredited. Read a brief excerpt at Ginger Nuts of Horror.